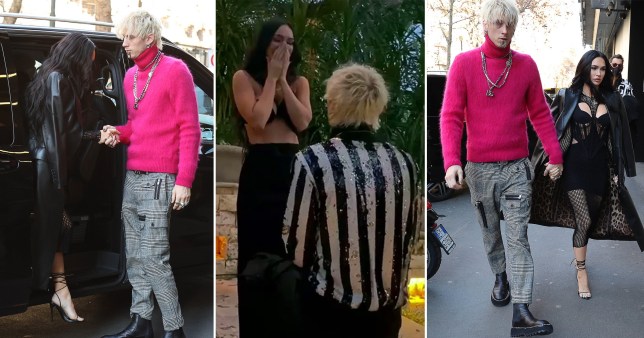 They broke the internet just days ago with their happy news (Picture: REX/@machinegunkelly)

Megan Fox and Machine Gun Kelly served some married-couple-to-be chic on Friday as they stepped out in Milan.

The US stars – who announced their engagement on Wednesday – held hands while looking every inch the ‘it’ couple in eye-catching outfits.

Megan, 35, stunned in a skin-tight black dress with cut outs, keeping warm in a leather coat with a leopard print lining.

The Jennifer’s Body star accessorised with strappy heels and wore her dark locks with a slight wave.

In a loving gesture, she also had a gold necklace with ‘MGK’ on it around her neck, as she flashed her dazzling engagement rock.

They’re the couple everyone’s talking about at the moment (Picture: REX/Shutterstock)

He teamed it with grey check trousers, chunky black boots and even chunkier silver chains.

The couple – who have been together for a year and a half – held hands as they got out of a car, following their revelation of ‘drinking each other’s blood’ after the rapper popped the question.

It is not known what business the pair have in Milan, as they were recently spotted returning from Puerto Rico to Los Angeles.

Their travels come after they broke the internet by sharing their happy news, with Megan posting a video of her fiancée getting down on one knee.

Megan wore a necklace with MGK’s initials on (Picture: Backgrid)

the actress showed off her gorge engagement ring (Picture: Backgrid)

Taking to her Instagram with 18.1million followers, the Till Death actress wrote: ‘In July of 2020 we sat under this banyan tree. We asked for magic.

We were oblivious to the pain we would face together in such a short, frenetic period of time. Unaware of the work and sacrifices the relationship would require from us but intoxicated off of the love. And the karma.’

She continued: ‘Somehow a year and a half later, having walked through hell together, and having laughed more than I ever imagined possible, he asked me to marry him.

Concluding in true Megan and MGK style, she finished: ‘…and then we drank each other’s blood.’

Of course they did.

The Bloody Valentine hitmaker – whose real name is Colson Baker – also uploaded a close-up of his bride-to-be’s mega engagement ring.

The beautiful design features both an emerald (Megan’s birthstone) and a diamond (MGK’s birthstone), which he designed specially.

The stones are ‘set on two magnetic bands of thorns that draw together as two halves of the same soul forming the obscure heart that is our love.’

The couple met while filming Midnight in the Switchgrass in March 2020.

They seemed inseparable months later after Megan’s ex husband, Brian Austin Green, revealed they were getting divorced after 10 years together. 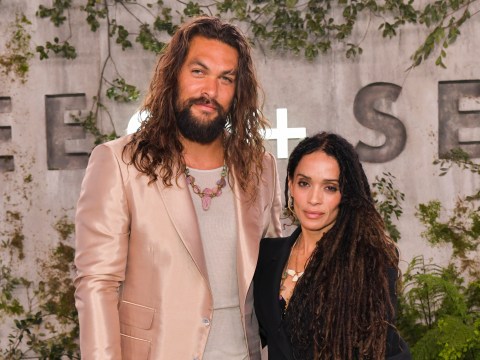 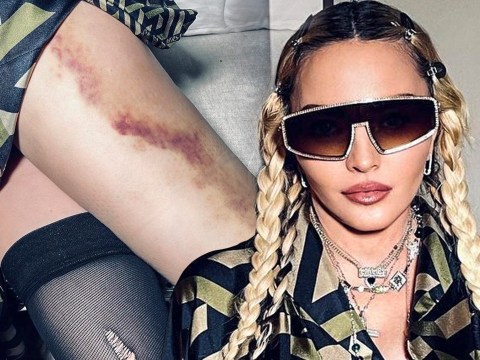 Megan and MGK went Instagram official last June and have been gushing over their connection and adoration for one another ever since.

Lifting the lid on their romance to GQ in October, the actress said the musician was her ‘soulmate’ and felt like they were meant to be together.