She’s gearing up for a new role in the action-packed Expendables 4.

Yet Megan Fox showed she wasn’t taking it easy on her downtime as she enjoyed a day out at London’s Luna Park on Monday along with her children Noah, nine, Bodhi, seven, and Journey, five.

The 35-year-old actress squealed with delight as she took on some of the theme park’s biggest rollercoasters alongside her brood. 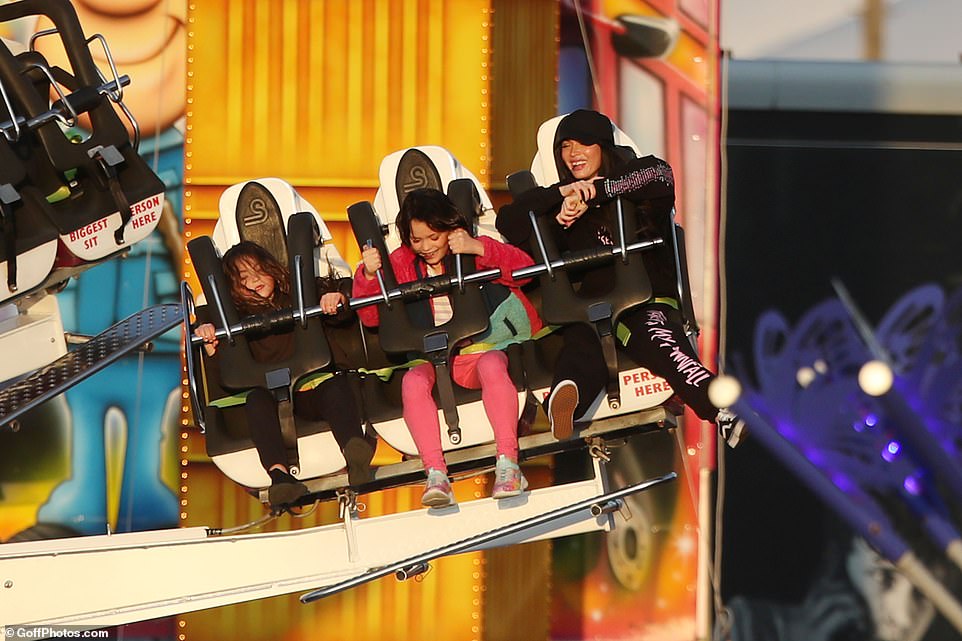 Fun times: Megan Fox screamed in delight on a rollercoaster ride as she treated her children to a day out in London on Monday after flying to the UK for Expendables 4 filming

Megan kept things casual for her day of thrill-seeking as she donned a baggy black tracksuit teamed with a baseball cap and trainers which had her boyfriend Machine Gun Kelly’s face on the back.

The trouser legs had the words Tickets To My Downfall, the name of his album emblazoned down them. He was not with Megan on the day as he is currently touring in the US.

The raven-haired beauty seemed in high spirits as she accompanied her children on the ride as she made the most of her time in the capital after jetting over from Los Angeles for her new movie role.

Megan is due to start filming Expendables 4 after joining the star-studded cast that includes Sylvester Stallone, Jason Statham and Dolph Lundgren. 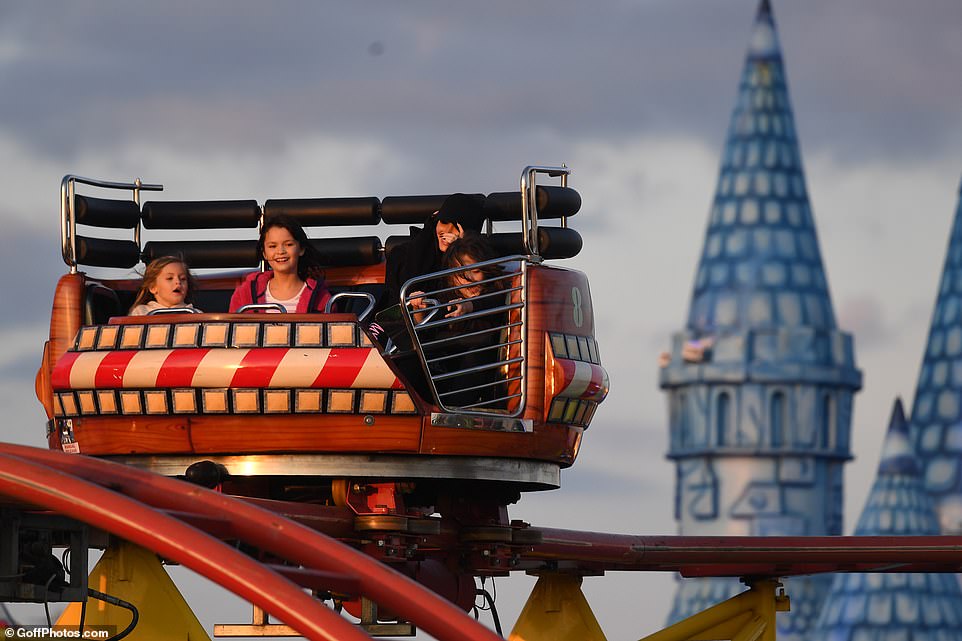 Fun times: She’s gearing up for a new role in the action-packed Expendables 4, yet Megan showed she wasn’t taking it easy on her downtime as she enjoyed Luna Park along with her children Noah, nine, Bodhi, seven, and Journey, five 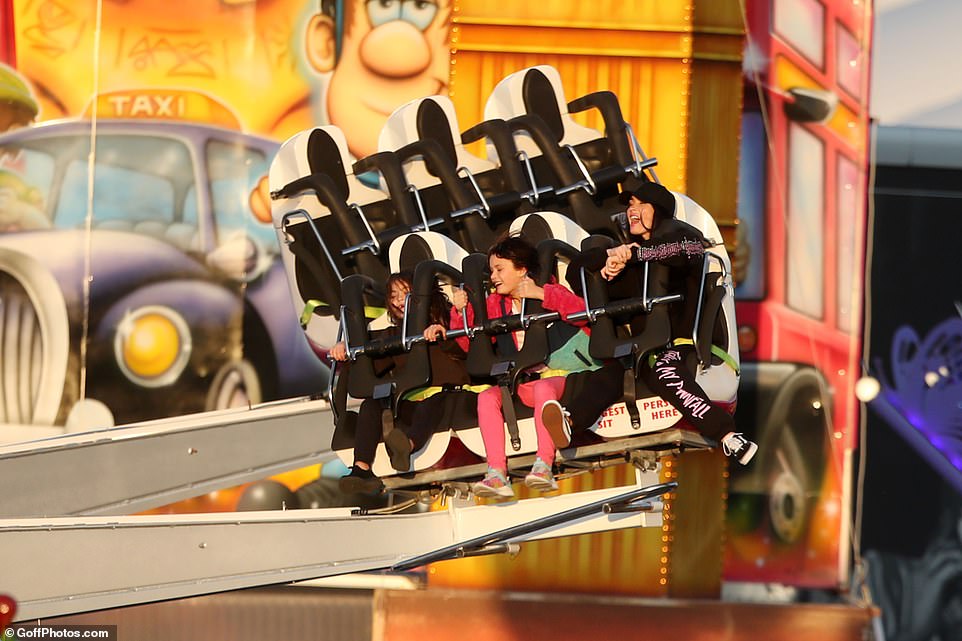 Scream if you wanna go faster! The 35-year-old actress squealed with delight as she took on some of the theme park’s biggest rollercoasters alongside her brood 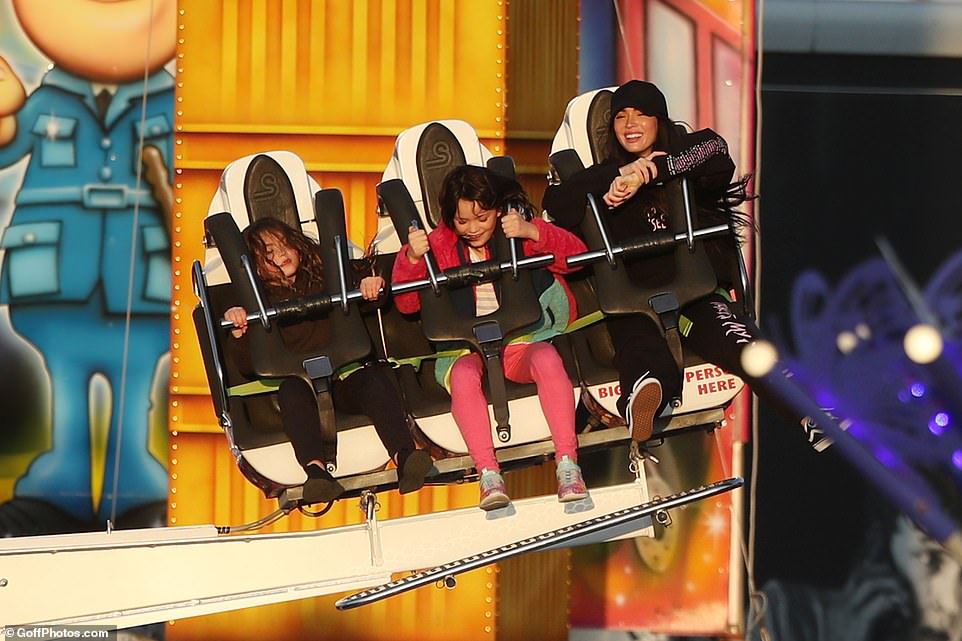 Fun times: The raven-haired beauty seemed in high spirits as she accompanied her children on the ride as she made the most of her time in the capital after jetting over from Los Angeles for her new movie role

Megan’s role has yet to be announced and the plot has remained tightly under wraps, yet it’s a given that the movie will see Mercenary Barney Ross (Styllone) and his team take on a new challenge.

The third installment of the franchise – released in 2014 – saw the Expendables face a new opponent – their co-founder Stonebanks (Mel Gibson), who was set on finishing the group off.

Next up for the franchise is The Expendabelles, a spin-off that will consist of a primarily female cast.

According to TIME, producer Avi Lerner said of the upcoming film: ‘We are writing the final lines of the script [and] we’ve got lots of ideas about who is going to be in it.’ 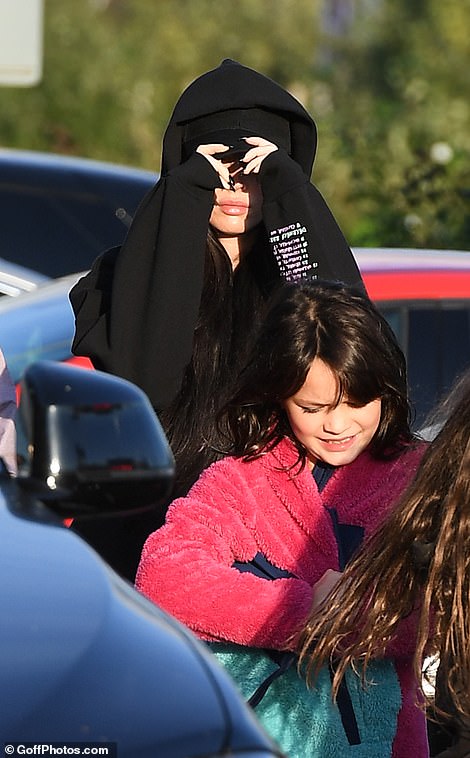 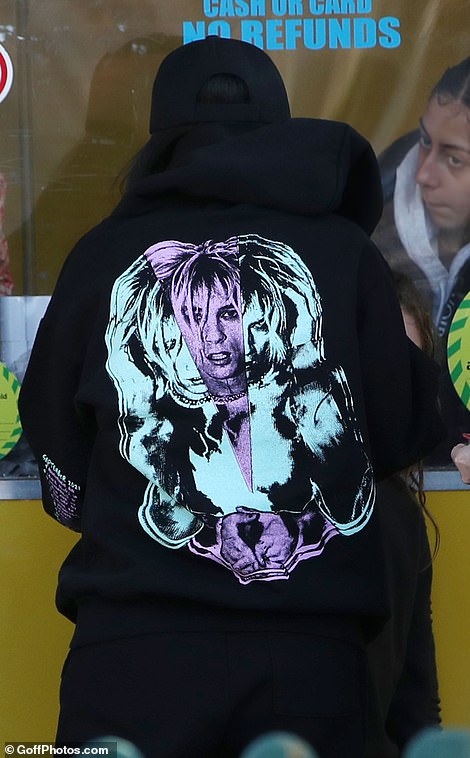 Low-key look: Megan kept things casual for her day of thrill-seeking as she donned a baggy black tracksuit teamed with a baseball cap and trainers which had her boyfriend Machine Gun Kelly’s face on the back

Keeping a low-profile: Megan’s ensemble was far more casual than her usual glamorous get ups as she sheathed her phenomenal figure in the baggy tracksuit which had MGK’s album name Tickets to My Downfall written on the leg 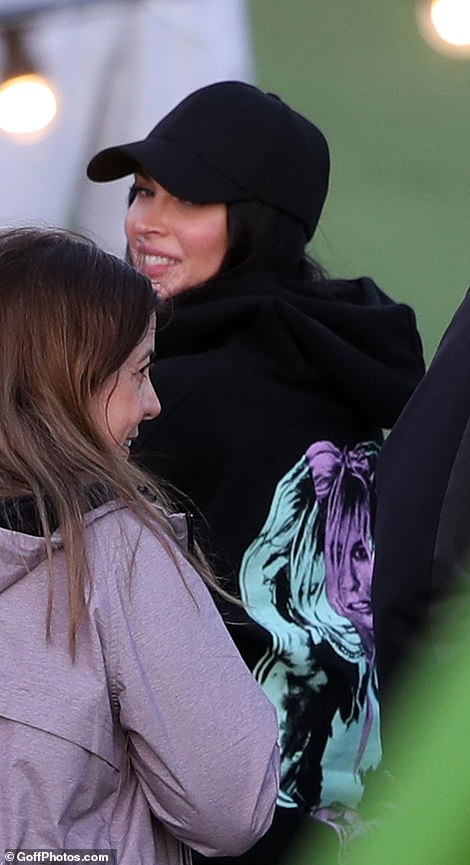 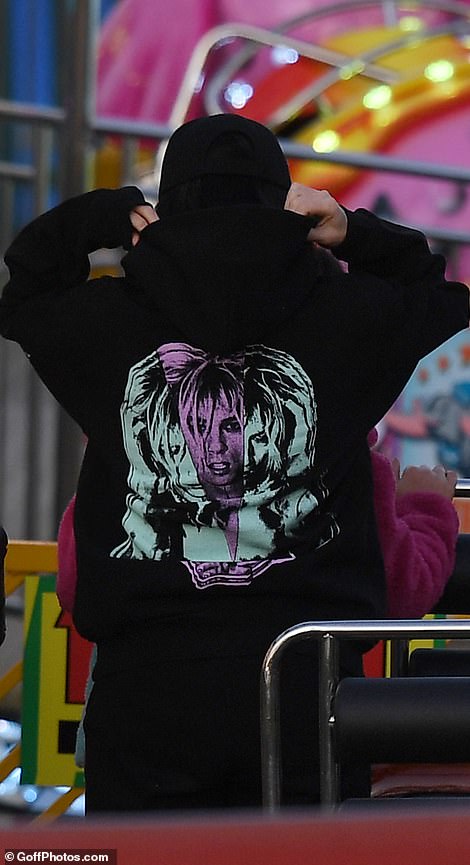 Splash of colour: Megan may have opted for an all-black look but her hoodie featured vibrant splashes of colour

As Megan will be spending time in London for filming she has flown over with her three children, while their father Brian Austin Green has been in the States competing in Dancing With The Stars.

Megan and Brian first started dating in 2004, became engaged two years after their first meeting and eventually tied the knot in 2010.

The former couple went on to welcomed two sons together and Megan served as a stepmother to Brian’s older son Kassius. 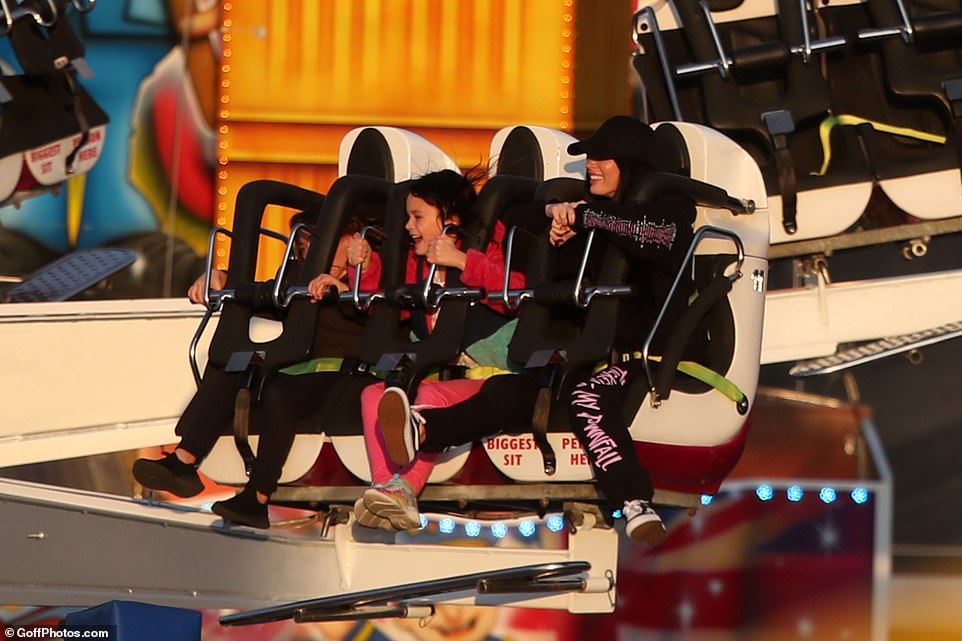 Living life on the edge: Megan seemed in high spirits as she whizzed around on the rides 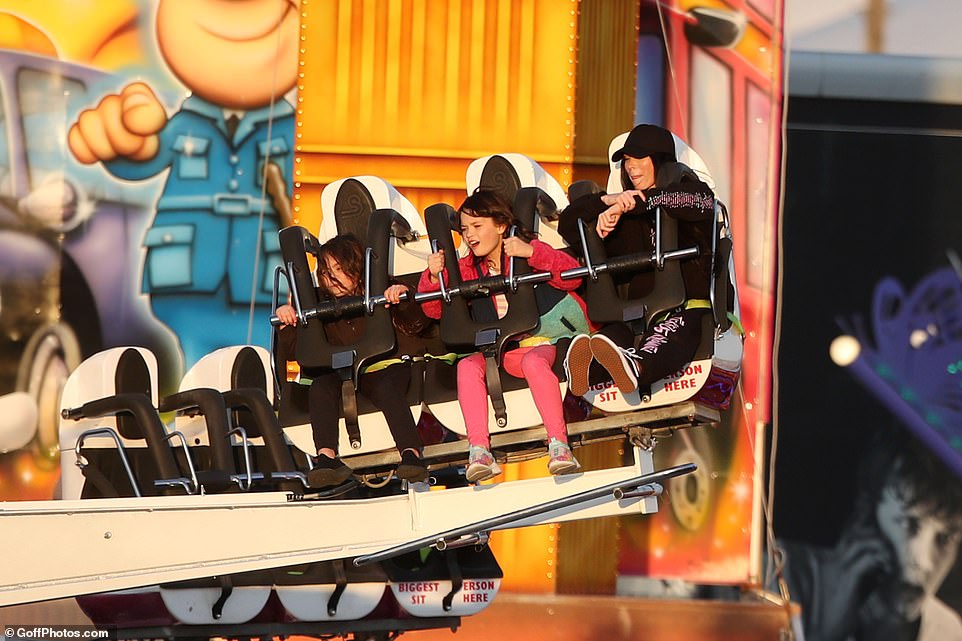 Fun times in the sun: The brood all seemed in high spirits as they enjoyed a high octane thrill ride

The couple separated in 2015 when the actress filed for divorce, although they ended up reconciling the following year and went on to add their youngest son to their family.

Megan filed to call off divorce proceedings in 2019 only to file to end her marriage last year.

On his podcast, Brian said that his wife had left him, revealing that she returned home from a film shoot in late 2019 and told him that ‘I feel more like myself, and I liked myself better’ when she was away from him.

They elected to ‘separate for a little bit’ and ‘see whatever it is we find’, he explained. 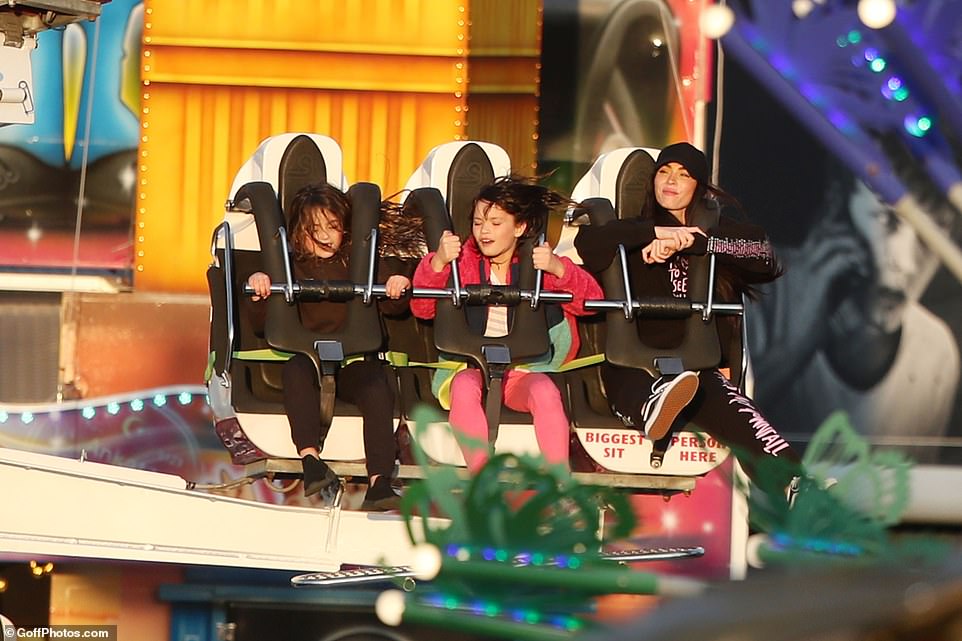 Let the good times roll: The group couldn’t contain their glee as they enjoyed the rides on the outing 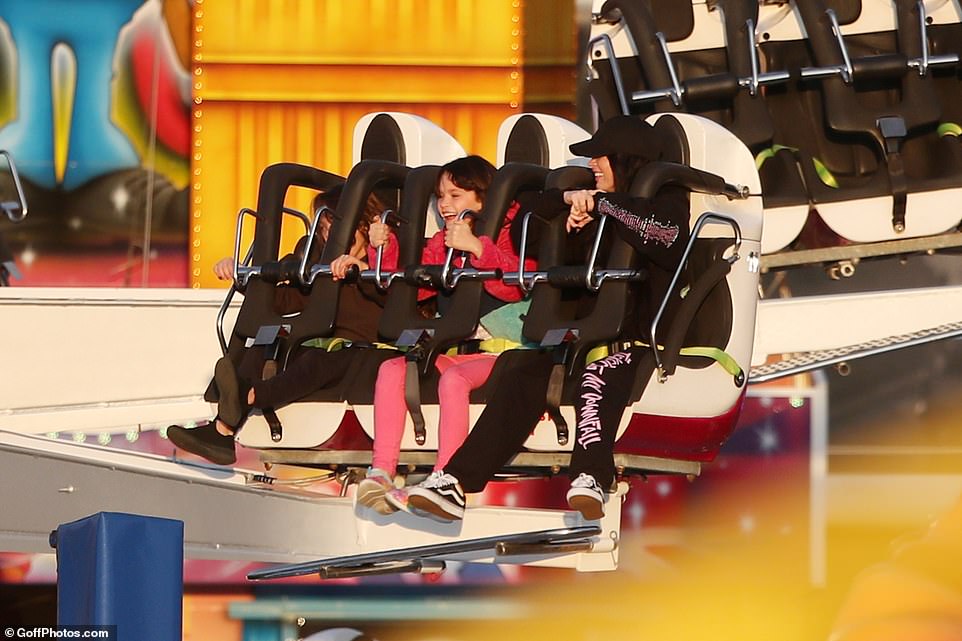 On the move: Megan beamed lovingly at her little ones as they cruised around on the rides

Megan is now dating Machine Gun Kelly, with the couple first linked in May last year, the same month Brian announced he’d split from her.

The actress and the songwriter first met on the set of the upcoming feature Midnight in the Switchgrass, in which they will appear.

She went on to appear in the music video for his 2020 single My Bloody Valentine, sparking rumors that they had been getting closer following her separation from Green. 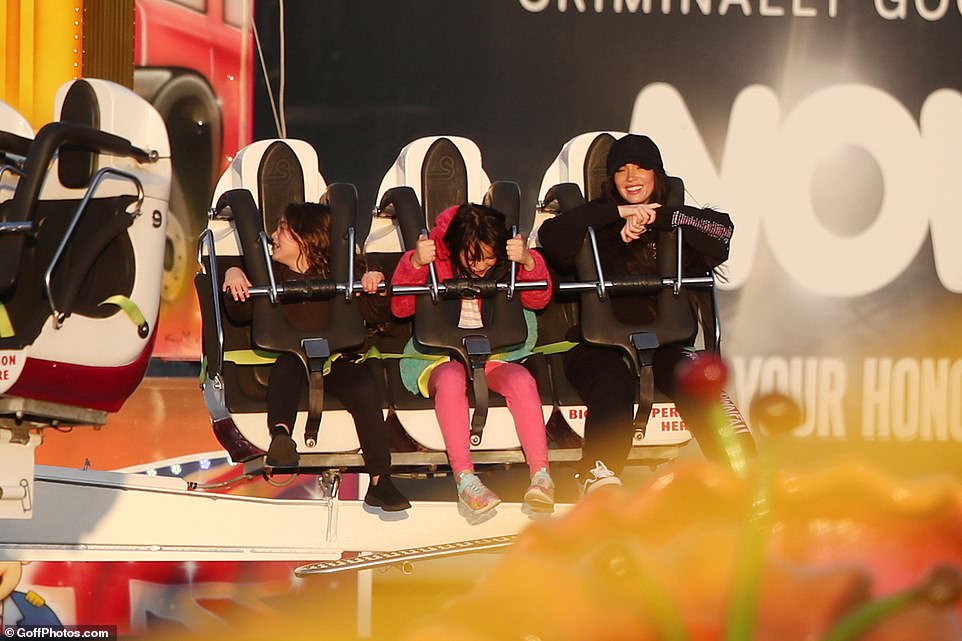 The time of their lives: Megan and her kids could not stop smiling as they whizzed around on the ride 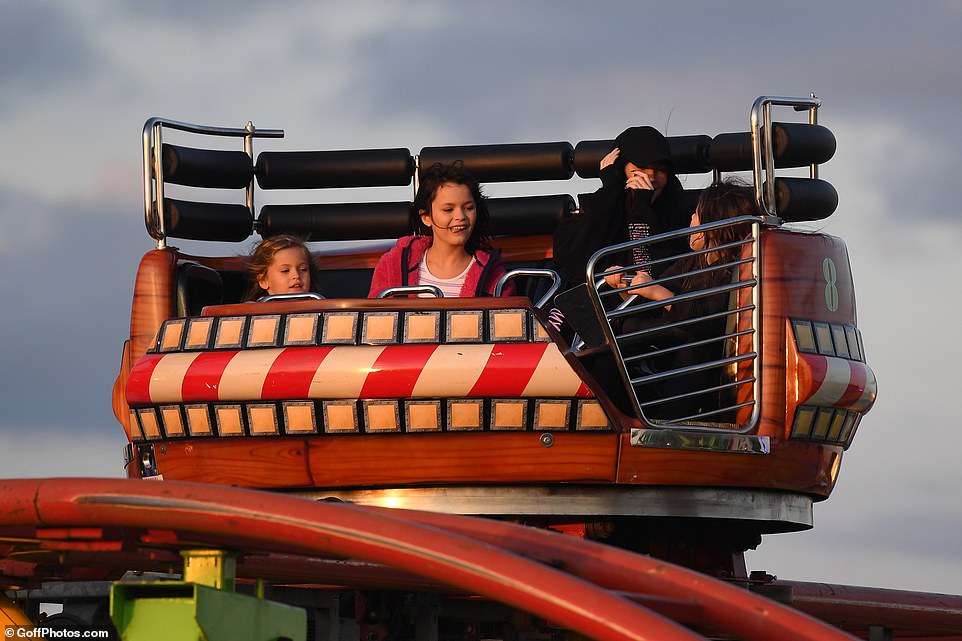 You can leave your hat on: Megan nearly lost her baseball cap in the high winds and had to secure it back down

During an interview with Nylon, Megan spoke about the moment where she came to realize that she was meant to be with the rapper.

Specifically, she recalled: ‘I looked into his eyes [and] I felt the most pristine, most gentle, most pure spirit. My heart shattered immediately and I just knew that I was f***ed.’

The performer went on to note that her boyfriend had a certain quality that made him irresistible and that she was especially taken with his personality.

‘The intensity of merging with him is just overwhelming, and the threat it poses is so powerful but so beautiful that you have no choice to surrender with reverence and with gratitude,’ she said. 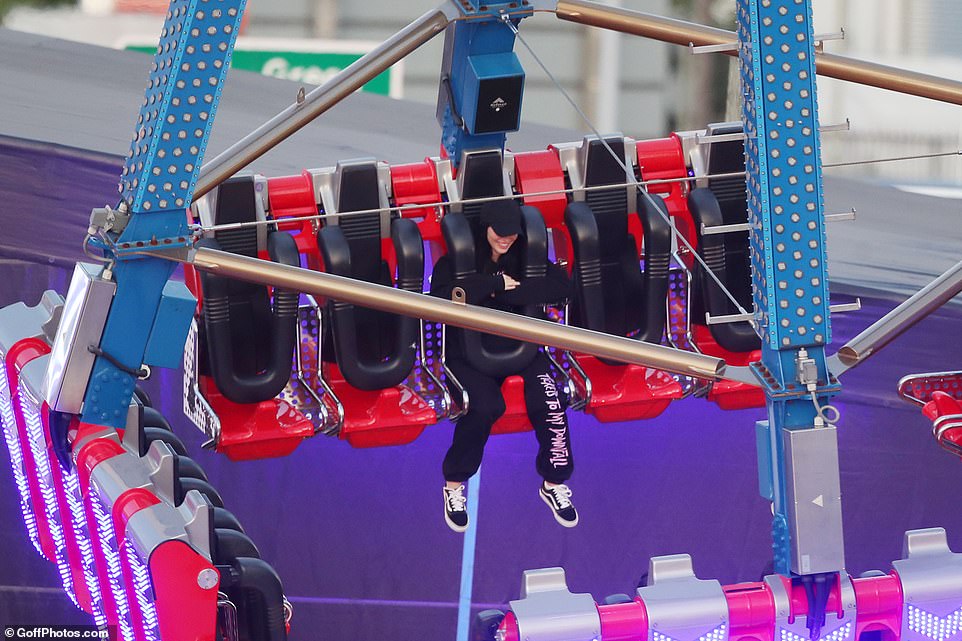 Adult time: Megan then opted for a solo ride as she took on a giant ride by herself without her kids present 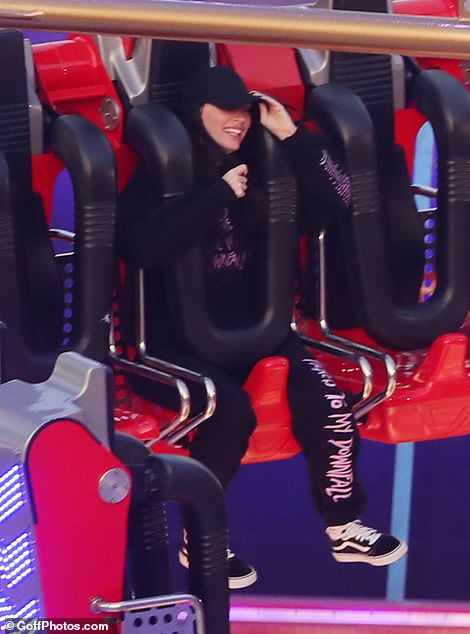 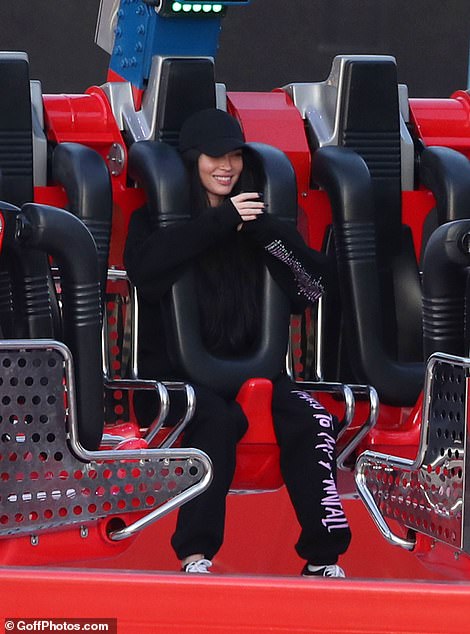 Weeeeeeee! Megan was laughing her head off as she enjoyed a solo spin around the theme park

Meanwhile, Megan’s theme park outing came after she spoke candidly about her battle with body dysmorphia.

The actress spoke with GQ Style magazine alongside MGK this week and was discussing about how a woman like her could be intimidating to some men, but she added some women might feel the same way about themselves as others do.

When asked if that’s how she feels, Megan responded, ‘Yeah, I have body dysmorphia. I have a lot of deep insecurities.’

The Mayo Clinic defines body dysmorphia as, ‘a mental health disorder in which you can’t stop thinking about one or more perceived defects or flaws in your appearance — a flaw that appears minor or can’t be seen by others.

Those who have body dysmorphia may even, ‘feel so embarrassed, ashamed and anxious that you may avoid many social situations.’ 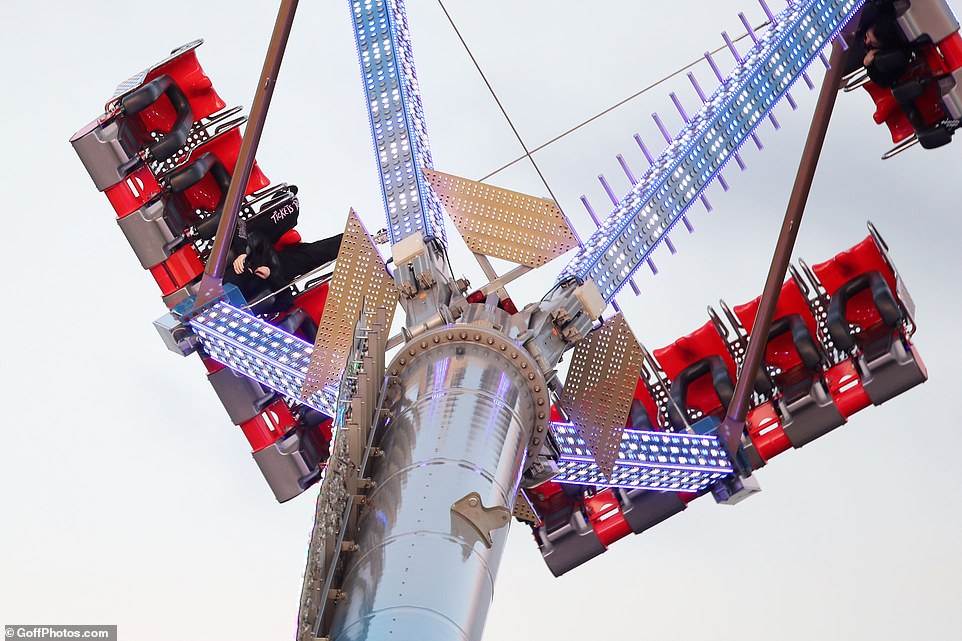 Wooo! Megan was up in the air as she enjoyed the ride to herself 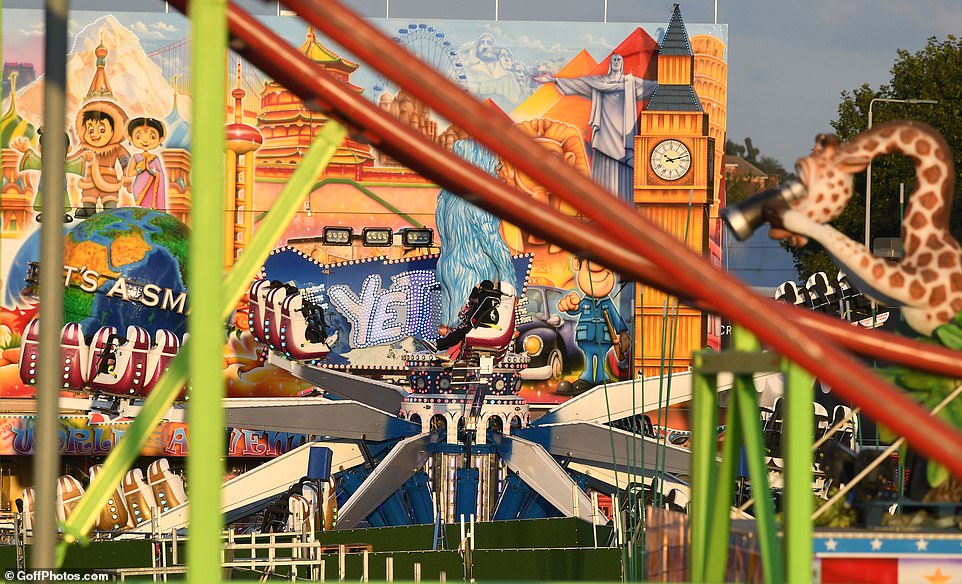 Choo choo! Megan was loving life as she spun around on the rollercoaster 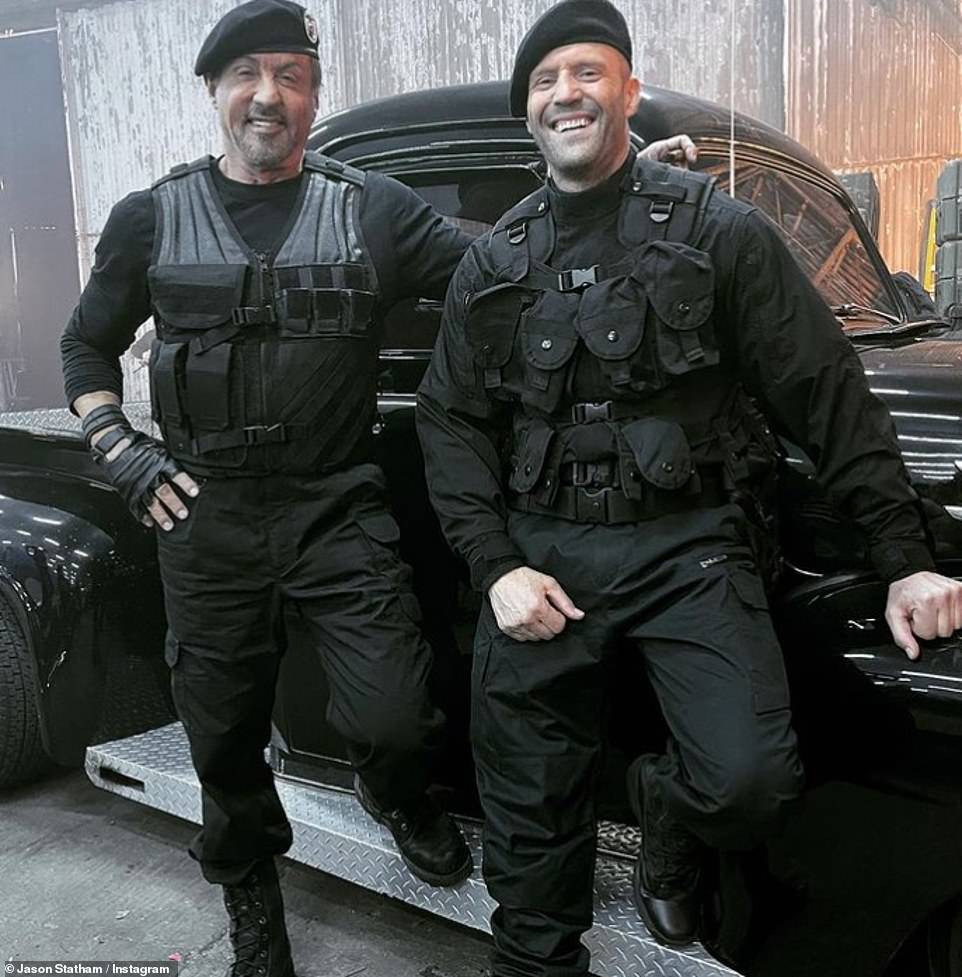 One to watch: Megan is due to start filming Expendables 4 after joining the star-studded cast that includes Sylvester Stallone and Jason Statham (pictured together)

Megan didn’t get into specifics about her body dysmorphia, but her MGK opened up about his issues.

He confirmed he has post-traumatic stress disorder from his difficult upbringing and his drug issues.

‘I’m basically trying to live without dying quickly every day,’ he said, adding that Megan has been trying to get him to open up more to his fans about his issues. 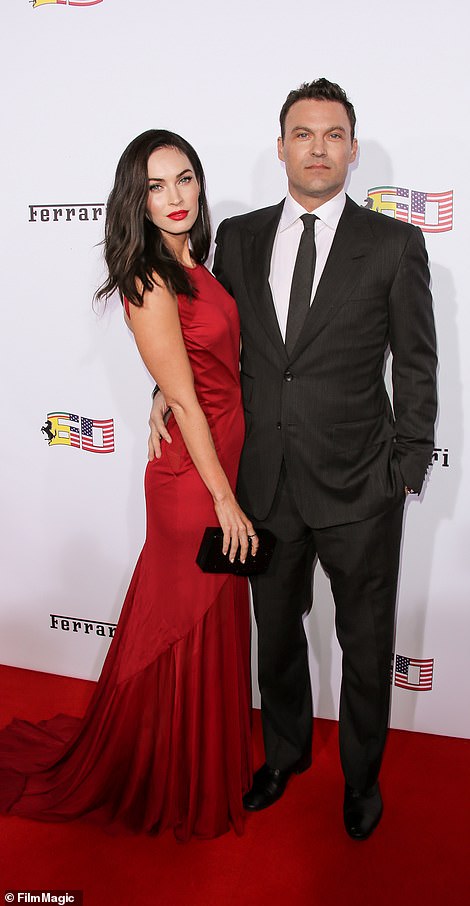 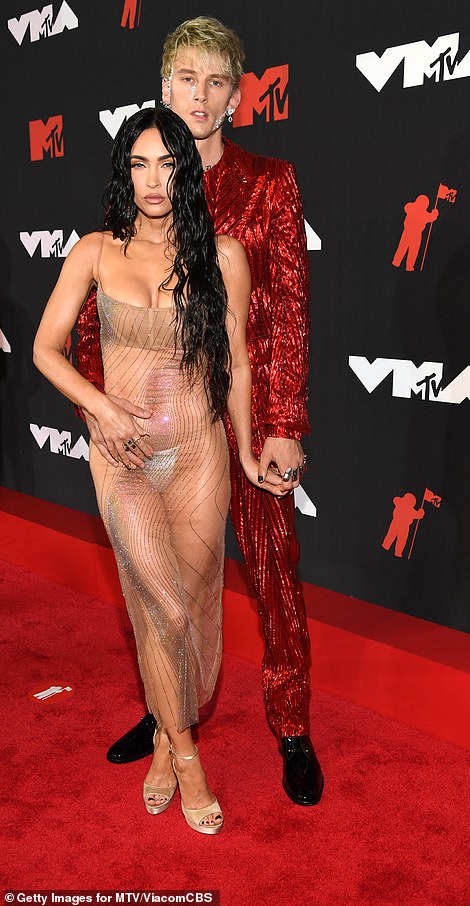 Former flame: Megan shares her three children with ex-husband Brian Austin Green (pictured together left in 2014) She is now in a relationship with rapper Machine Gun Kelly (right)