The former Real Housewives Of Orange County star, 37, posted photos from their fun-filled day at the theme park as the family posed by the Sea Lions Live show on Wednesday.

Though he only legally became her husband a month ago, Cuffe already looked a part of the family as he helped corral the children. 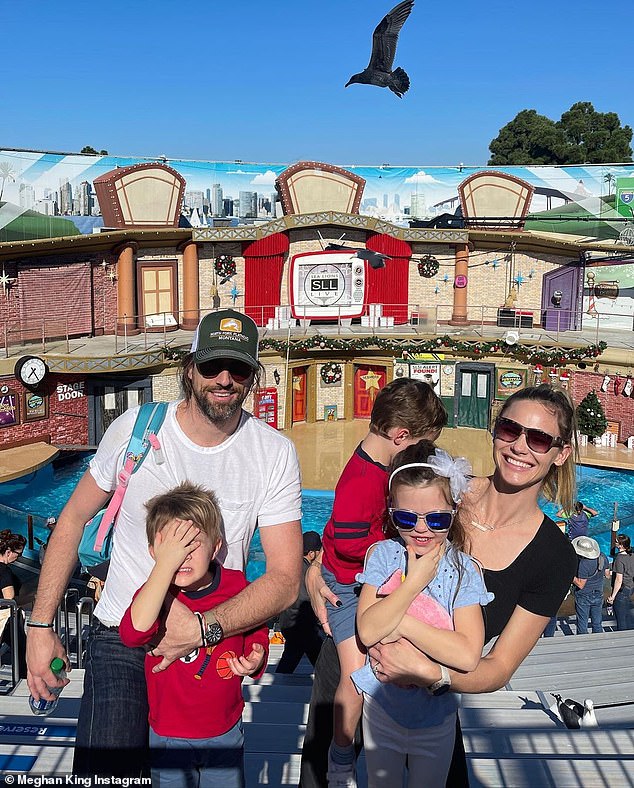 ‘We had a ball’: Meghan King celebrated her daughter Aspen’s fifth birthday at SeaWorld with her new husband, Cuff Owens

Meghan beamed with joy as she posed with her daughter Aspen and son Hart, three in her arms while her husband gently held his stepson Hayes, three.

In the caption, Meghan gushed about her little ‘firecracker’ and revealed they enjoyed a day at the San Diego park with her extended family.

‘Happy 5th birthday to the most firey-firecracker: Aspen. She felt so special to have a fun day hosted by SeaWorld with her extended family all together.

‘The grown-ups are tired, the kids are out like lights, and we got some halfway decent sunny pics to prove that we had a ball. (We highly recommend the Sea Lion show!) Leave Aspen a birthday message below! #SeaWorldSanDiego.’ 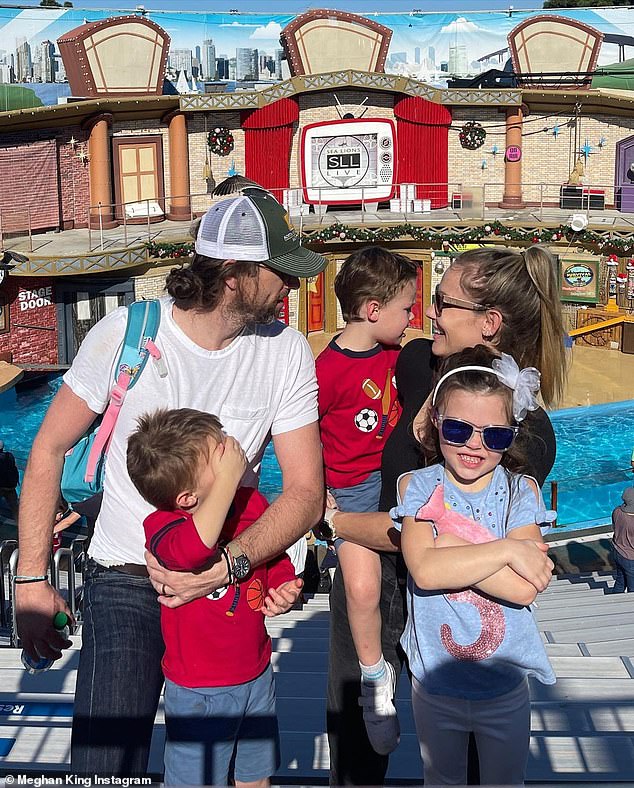 Father figure: Though he only legally became her husband a month ago, Cuffe already looked a part of the family as he helped corral the children

Meghan has been enjoying the newlywed life ever since tying the knot with Cuffe, whose uncle is Joe Biden, last month.

The Bravo star tied the knot with Cuffe, whose mother is Biden’s younger sister and political adviser Valerie Biden Owens, just weeks after meeting on a dating app.

Speaking about her new found flame, Meghan told Brides how their romance quickly took off: ‘We spent five straight hours on the phone the first time we spoke. By the time that call ended, Cuffe was booked and packed for a flight to St. Louis that took off in about eight hours. 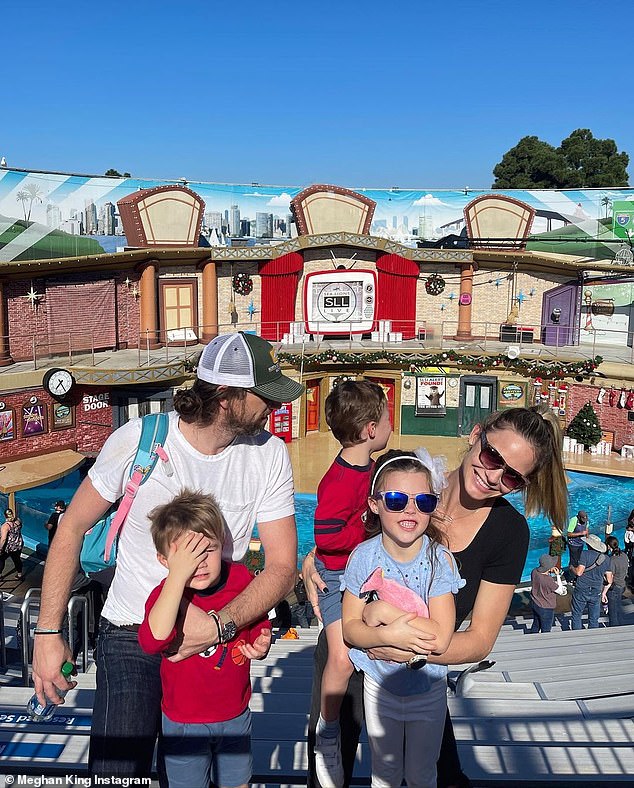 Her little ‘firecracker’: Aspen grinned as she posed in the arms of her mother

‘Within a week, we were back on the East Coast, meeting his family, and starting to plan our future together. We didn’t leave each other’s side for weeks.’

Earlier this month, she celebrated turning her life around after her messy divorce from ex-husband Jim Edmonds, whom she shares her three children with.

‘These photos were taken on a dreary day one year ago when I bought this house all by myself,’ Meghan began in the post. ‘A year to date before that was when my world was rocked and I was forced to endure the most humiliating public split I’d ever have the displeasure of experiencing. 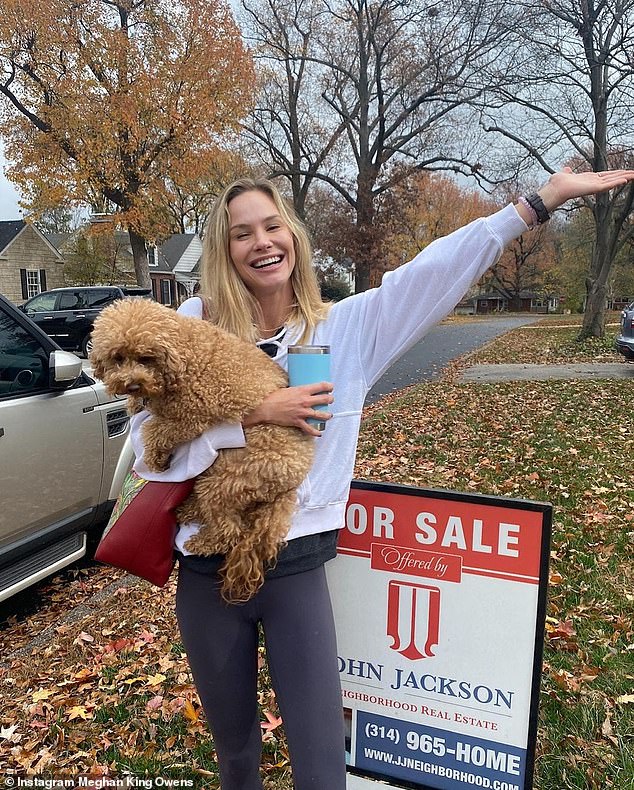 New beginnings: King celebrated turning her life around after her messy split from Jim Edmonds in a post earlier this month

‘I learned to single parent three preschoolers during Covid and managed to save enough money to leave my former family home and proudly provide a *much smaller, much cozier* PERFECT home for my kids.

‘(It was a tumultuous home purchase and because of divorce circumstances I couldn’t celebrate or announce this monumental victory …anyone going through a divorce with kids knows the internal tug of wanting to share special news with kids weighed against the consequences that come when they share that news with their other half of their family… it’s very real and very sad.),’ she explained.

‘In my first year of home ownership I continued putting myself back together and learned how to balance single motherhood with self-care. And at roughly the one year anniversary of buying my house I got married.

‘So much can change in one year, in two years. You are strong, you are worthy, and you can do what I did. It will hurt and you will cry, but you will prevail. You have no other choice to make the decision every single day to find happiness. I believe in you.’ 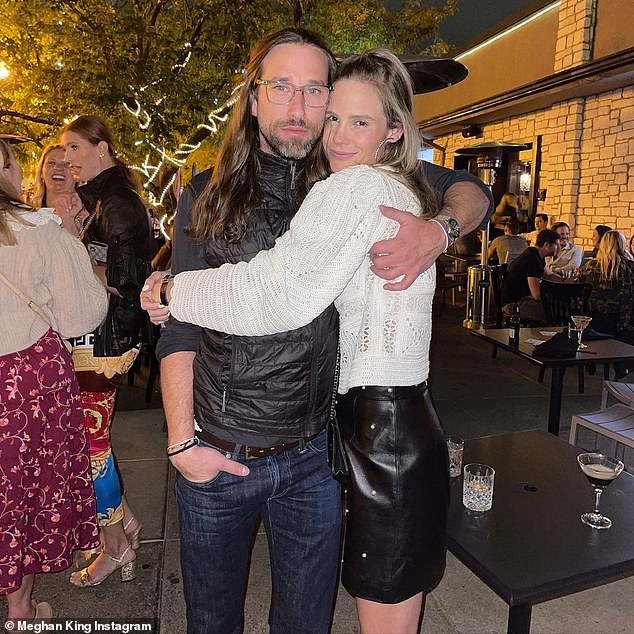 Whirlwind romance: The Bravo star tied the knot with Cuffe, whose uncle is Joe Biden, just weeks after meeting on a dating app