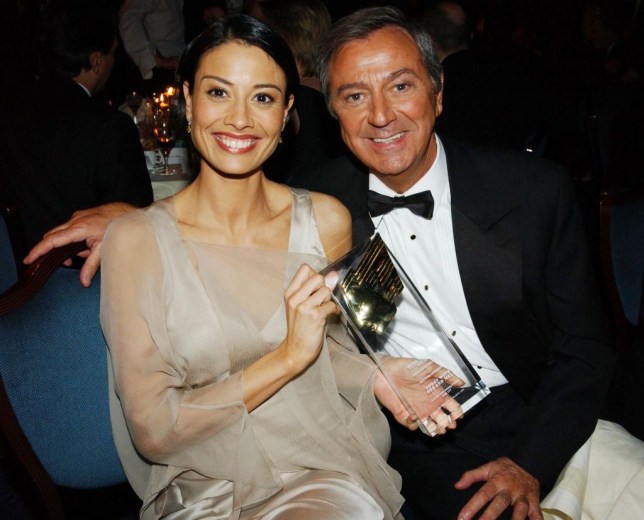 Mel was thinking of her late colleague and friend (Picture: Getty)

Mel Sykes sent love to her long-time friend and former colleague Des O’Connor’s daughter as she marked what would have been her dad’s 90th birthday.

Karen, Des’s daughter from his first marriage to Phyllis Gill, took to Twitter to fondly remember her father on his birthday on Wednesday, revealing that she’s help him set up his account on the social media site, with her father ‘thrilled to discover another way to interact with an audience’.

From his official @DesOConnorCBE account, she wrote: ‘Des’ youngest daughter here. Today would have been Dad’s 90th birthday. I helped him set up this account some time ago.’

Revealing how she helped him out on Twitter, she continued: ‘I used to pop over to his place and read out any messages tweeted to him and he’d dictate, from his armchair, exactly what he wanted to respond.’

Recalling how much he enjoyed social media, she added: ‘New to the web, Dad was thrilled to discover another way to interact with an audience. “Read another one”.

‘Our Twitter trawls became a routine and often led to fits of giggles. Happy Birthday Dad.’

New to the web, Dad was thrilled to discover another way to interact with an audience. âRead another oneâ. Our Twitter trawls became a routine and often led to fits of giggles. Happy Birthday Dad.
Here he is in 1964 describing what it feels like to lose followers in real-time. pic.twitter.com/8j03j4qtrj

Karen then added a fitting throwback clip from her comedian dad on CBS in the 1960s, pretending to have a ‘audience viewing meter’

‘Here he is in 1964 describing what it feels like to lose followers in real-time,’ she joked, as the clip saw Des suggest he dropped from 46 million viewers down to just his mum.

Presenter Mel, who worked with Des on the highly popular chat show Today with Des and Mel from 2002 to 2006, saw Karen’s tweet and responded with her thoughts and support.

‘Sending you much love angel xxxxx,’ she replied.

The pair worked together on Today with Des and Mel (Picture: Comic Relief/Getty Images)

Des died aged 88 in November 2020, and in an ITV special that paid tribute to the star later that year, Mel teared up remembering her time working with her ‘amazing friend’.

Recalling how he ‘always had a smile on his face and a twinkle in his eye’, she added: ‘I just remember him being an amazing friend to me and I’ll miss him, it’s that simple.’

Elsewhere, the 51-year-old opened up about her ‘relief’ at being diagnosed with autism, the same condition as her 17-year-old son Tino, explaining that she now felt ‘validated’.

Mel revealed to Hello! magazine: ‘During lockdown I enjoyed not having to go out and socialise, to brave corporate events, shake hands and be pulled in for a kiss by complete strangers.

‘I’ve always been uncomfortable in crowds or being touched by people I don’t know.

‘My sensitivities are now completely validated because I’m autistic.’

MORE : Alison Hammond remembers her mum two years on from her death: ‘The pain has never left my heart’