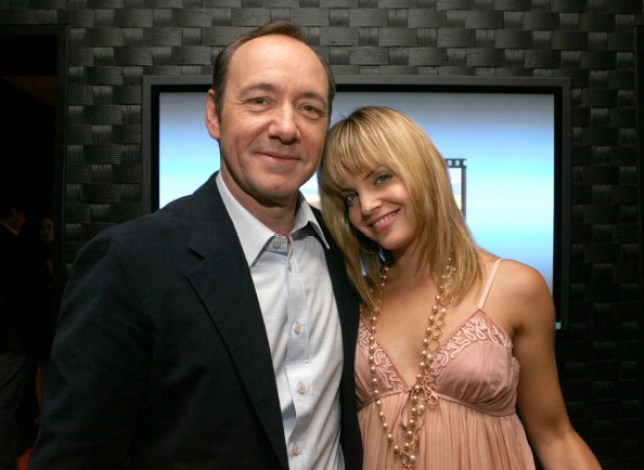 Mena Suvari has recalled a ‘weird and unusual’ experience with Kevin Spacey on the set of American Beauty.

The actress was 19 years old when she was cast as cheerleader Angela Hayes in Sam Mendes’ Oscar-winning drama, with Spacey playing Lester Burnham, a man having a midlife crisis who becomes infatuated with her.

In her new memoir, A Great Peace, Suvari said that while she trusted the actor, she recalled his strange preparation for one scene.

In a passage serialised by People, the 42-year-old said that Spacey brought her into a side room where they ‘lay on the bed very close to one another’.

Suvari wrote: ‘He was sort of gently holding me. It was very peaceful but weird and unusual.’

The star said that she thought about that day when sexual abuse and misconduct accusations were made against Spacey in 2017, adding: ‘My heart goes out to anyone who suffers abuse.’

Spacey, 61, is preparing to make his Hollywood comeback in the Italian film L’umo Che Disegno Dio (The Man Who Drew God), four years after Star Trek: Discovery actor Anthony Rapp alleged that Spacey made a sexual advance towards him when he was 14 years old.

The pair starred opposite each other in American Beauty (Picture: DreamWorks SKG/Getty Images)

Spacey said he had no recollection of the incident and apologised to Rapp for his ‘inappropriate drunken behaviour’, while coming out as gay at the same time in a widely criticised statement.

The same year, 20 testimonies of ‘alleged inappropriate behaviour’ by the actor were made at the Old Vic theatre, while the following year, Spacey pleaded not guilty to an indecent assault charge involving a teenage boy; the charge was later dropped.

Los Angeles officials did not pursue two sexual assault claims – one due to the statute of limitations, the other after the alleged victim died.

American Beauty, along with American Pie which was released the same year, was Suvari’s big breakthrough, seeing her nominated for best actress in a supporting role at the Baftas.

The 1999 film won the Screen Actors Guild award for outstanding performance by a cast, and won best picture, best director for Sam Mendes and best actor for Spacey, as well as best original screenplay and best cinematography, at the Oscars.

Suvari credited the film as a ‘beautiful experience’ that gave her the opportunity to express herself at a particularly difficult time in her life.

In her memoir, Suvari reveals that she was a victim of repeat sexual abuse between the ages of 12 and 20, beginning with a friend of her brother raping her a month before her 13th birthday.

Her experiences led to the actress abusing hard drugs and partying to cope.

At the age of 20, she was able to break free of an abusive relationship thanks to her work, therapy and friends, and two decades on, is celebrating becoming a mother to her first child, son Christopher, with husband Michael Hope.