The actor, 60, watched as the New York Knicks defeated the Boston Celtics 138 to 134 in double overtime alongside his wife Tracy Pollan, Dustin Hoffman, Tracy Morgan and Iggy Azalea.

The Back to the Future actor wore a purple jacket, with a green plaid flannel underneath it. He also donned a pair of dark blue pants and black sneakers with white trim. 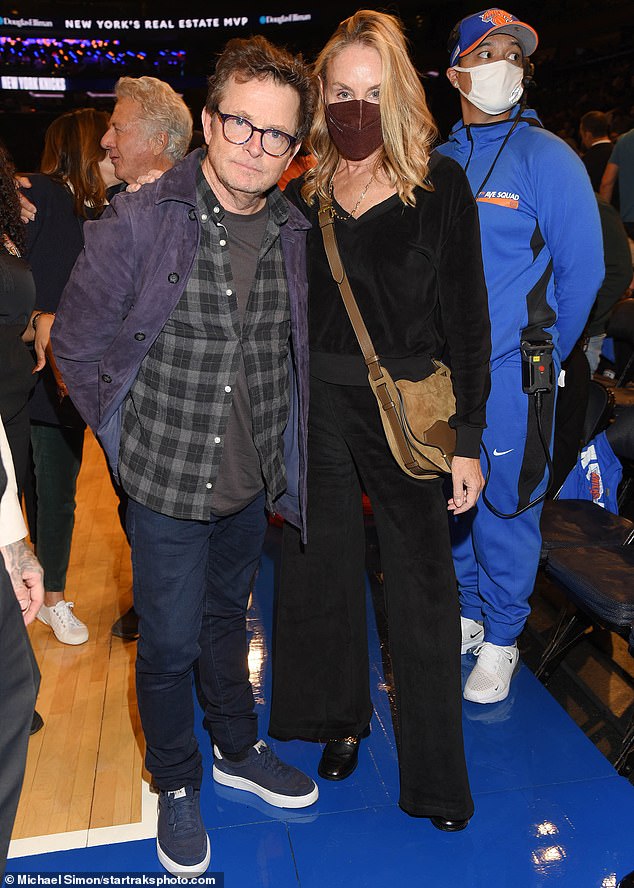 Enjoying the season’s tip-off: Michael J. Fox and his wife Tracy Pollan took in a basketball game at Madison Square Garden next to several famous faces

Fox’s better half wore a black sweater and free-flowing black pants. She also donned a brown face covering while she stood up and cheered.

The couple were photographed alongside legendary actor Dustin Hoffman, 84, who wore a blue zip-up sweater and a white shirt underneath. His hair defied gravity and rose toward the ceiling.

The two actors’ appearances at the game marked a rare night off for the busy pair.

Fox recently lent his voice to Back Home Again, an animated film that chronicles one of the largest wildfire evacuations in the history of Canada. He also stays involved in his charity, The Michael J. Fox Foundation for Parkinson’s Research. 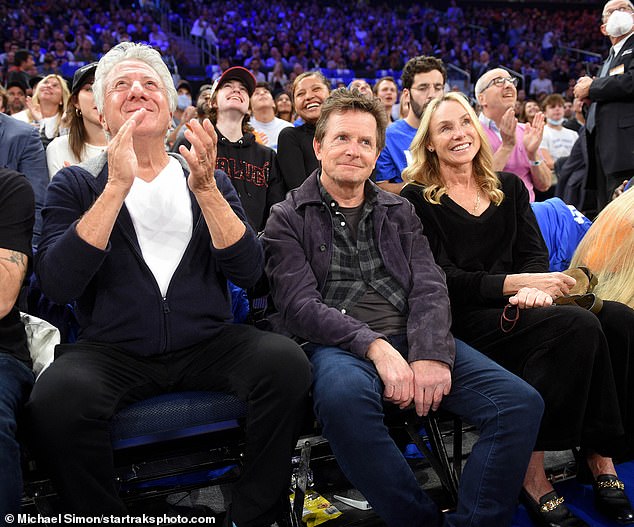 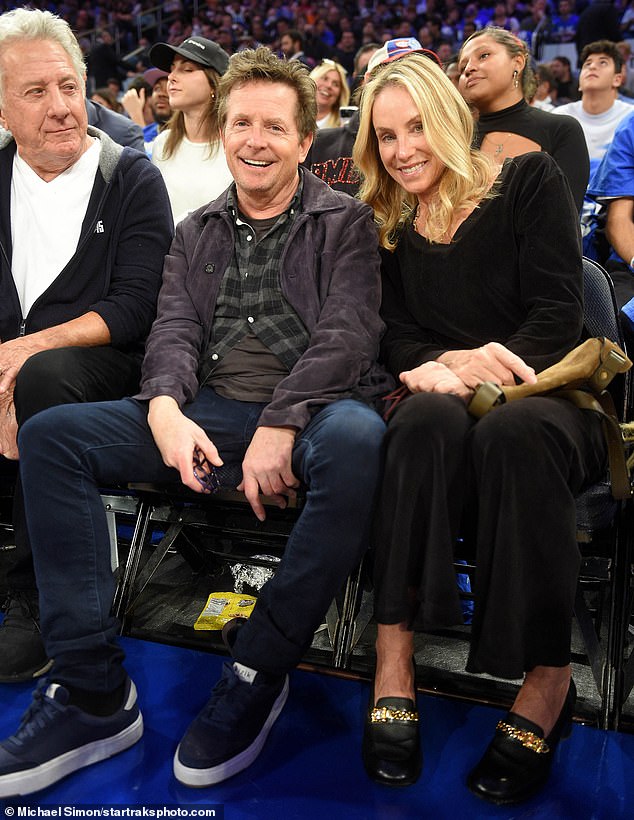 A rare night off: Fox and Hoffman have stayed very busy with different projects in recent years

Speaking to People, Fox recently revealed that he is ‘in a really good groove’ these days after having suffered a nasty fall three years ago that left him with a broken arm. The accident occurred while he was recovering from spinal surgery.

‘Every day is different. The circle [of what I can do] gets smaller. But I’m happy I’ve found things in the middle of the circle that can’t be touched, like my family and the time I have with them,’ he told the outlet.

Dustin Hoffman has a pair of upcoming films as well. He has a role in As Sick as They Made Us, written and directed by The Big Bang Theory star Mayim Bialik, and a part in Sam & Kate, a romantic comedy-drama co-starring Sissy Spacek.

The comedian stood up and cheered after a particularly good moment for the Knicks during which the Family Ties actor cheered loudly and pumped his fist.

Morgan wore several large gold chains, one with his initials emblazoned upon the pendant. His shirt was blue, orange and white, matching the Knicks’ colors. 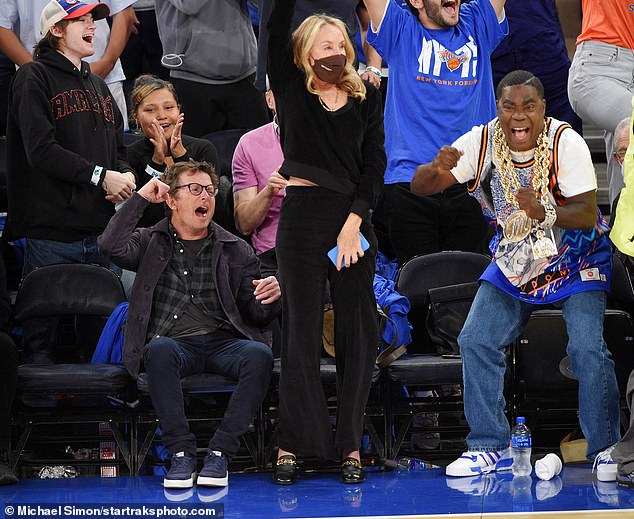 Celebrating together: Tracy Morgan sat just a couple of seats away from Fox and cheered loudly at a positive moment for the Knicks 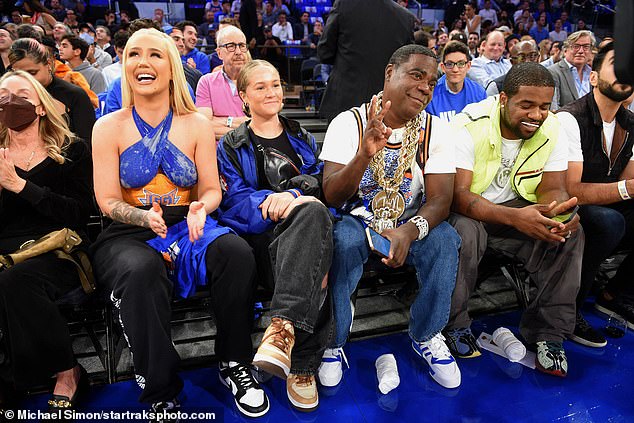 A job well done: Iggy Azalea took a seat next to Fox’s wife Tracy Pollan after her halftime performance

All of the stars watched Iggy Azalea put a big smile on her face and performed for thousands of fans at the halftime show.

The 31-year-old rapper put her enviable curves on display at the performance as she wore white flared trousers which made sure to accentuate her peachy bottom.

After her halftime show, the Problem singer, took a seat next to Pollan and just one down from Morgan. 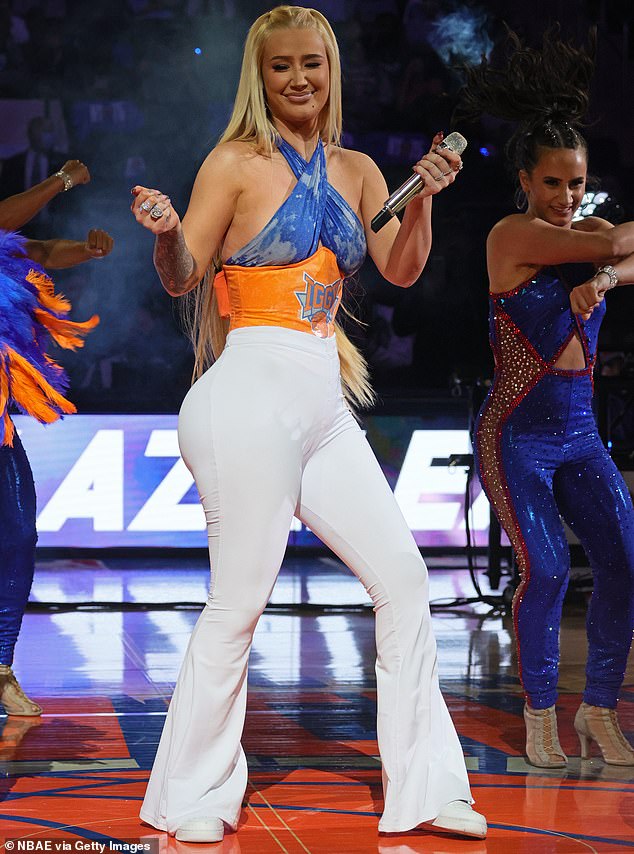 Shaking what her mama gave her: The star showed off her peachy bottom during the opening day halftime performance