They last performed as a trio before the first national lockdown back in March 2020.

But the female band members of Liberty X were finally reunited as they posed together for a picture uploaded to Instagram on Tuesday.

Michelle Heaton, 42, uploaded a selfie alongside Kelli Young, 39, and Jessica Taylor, 41, as they held canes in a studio, ahead of the performances without their male co-stars Kevin Simm and Tony Lundon. 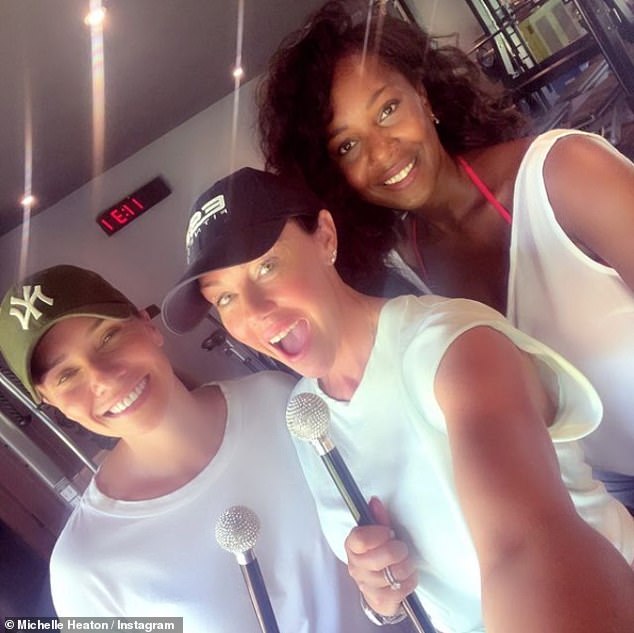 ‘And the girls are back’: Michelle Heaton put on an animated display as she reunited with Liberty X band mates Kelli Young and Jessica Taylor in a photo uploaded to Instagram on Tuesday, ahead of two new gigs

The trio all looked animated as they huddled close together and smiled for the camera after meeting up inside a gym.

All three women opted for similar outfits, as they all wore plain white tees

Michelle and Jessica added a splash of colour to their outfits though with the addition of baseball caps.

They were also picture carrying what appeared to be decorative canes, with a shining silver ball adorning the top of each. 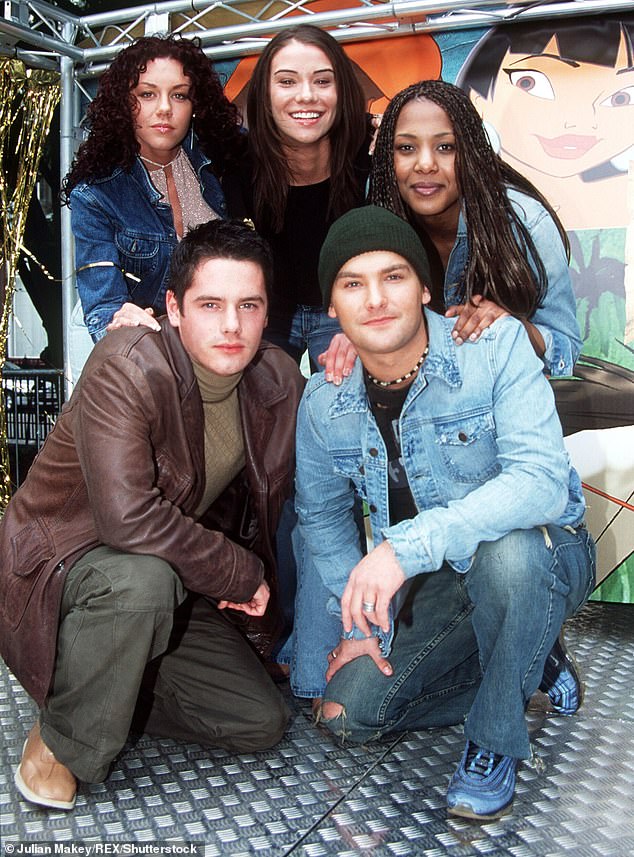 Original group: Liberty X originally formed on the 2001 series Popstars, and officially disbanded in 2007, before coming together again a few more times for reunion gigs in the 2010s (Pictured: Liberty X in 2001)

Michelle also uploaded a short video clip onto her Instagram story to offer some background to the reunion, which was occurring without their male bandmates Kevin and Tony.

In the clip, she revealed that they were preparing ahead of two performances they were booked for next week.

In between fits of laughter, Michelle said: ‘This is Kelli, this is Jessica. We’re Liberty X and we’ve got gigs next week.’

The women are set to perform two separate gigs next week, one in Swindon on July 30, and the other in Manchester the following day. 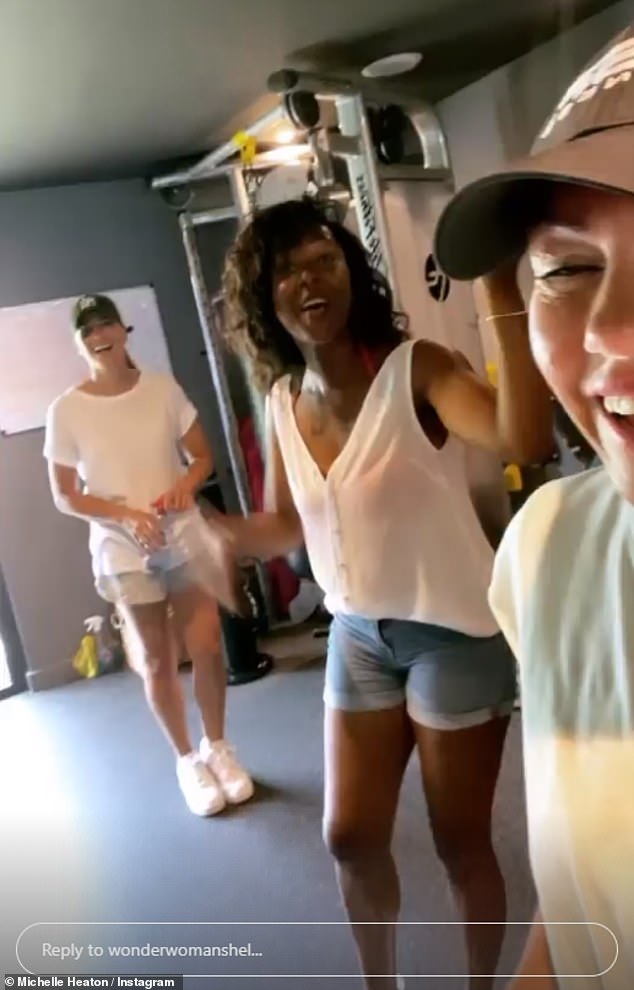 Joking around: Michelle also uploaded a short video clip onto her Instagram story to offer some background to the reunion. In the clip, she revealed that they were preparing ahead of two performances they were booked for next week

The group photo comes after Michelle, who turned 42 on Monday, documented her beautiful weekend away on Instagram, showcasing her figure in an incredible pale rose swimsuit.

The singer didn’t hold back from sharing with her 236,000 followers highlights from a surprise trip to Mottram Hall Hotel in Cheshire, organised by her husband of 11 years, Hugh Hanley.

She shared two jaw-dropping snaps in the swimwear, looking bronzed as she lapped up the sunshine.

Dressing up to mark the occasions, she rocked a statement dark pink lipstick and wore her dark locks loose. 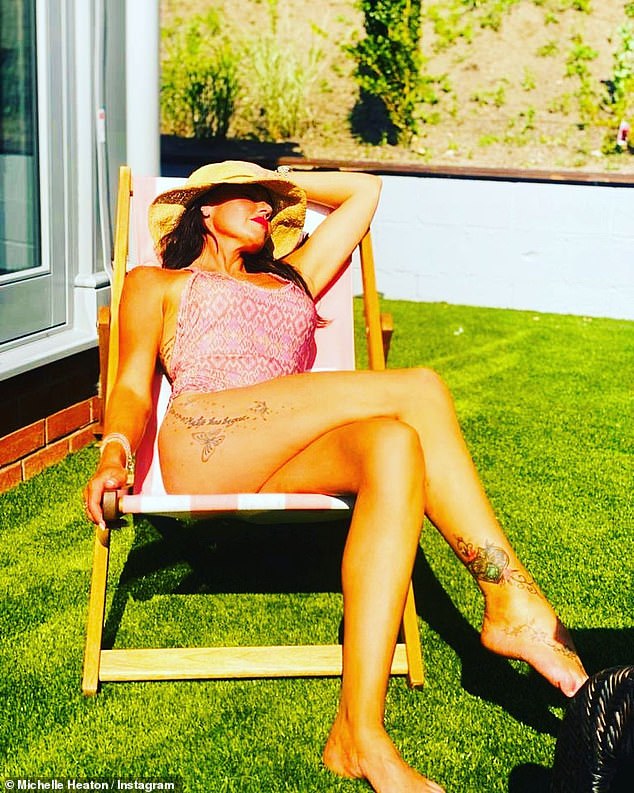 Good times: Michelle flaunted her outstanding figure in a pale rose swimsuit on Instagram on Sunday as she celebrated her 42nd birthday AND wedding anniversary

In one of the shots, Michelle was reclined in a sun lounger and kept it cool with a sunhat.

The former Liberty X star gushed about her husband Hugh in the post, with the pair celebrating their anniversary – as well as Michelle’s birthday – on Monday.

‘And he delivers @hughhanley has brought me all the way to @mottramhallcheshire @champneysspas and it’s simply Devine .. Happy anniversary for tomorrow baby.

‘My rock my best friend my man and he booked and paid all by himself for those enquiries lol he’s a big boy you know [poking tongue out emoji],’ she penned. 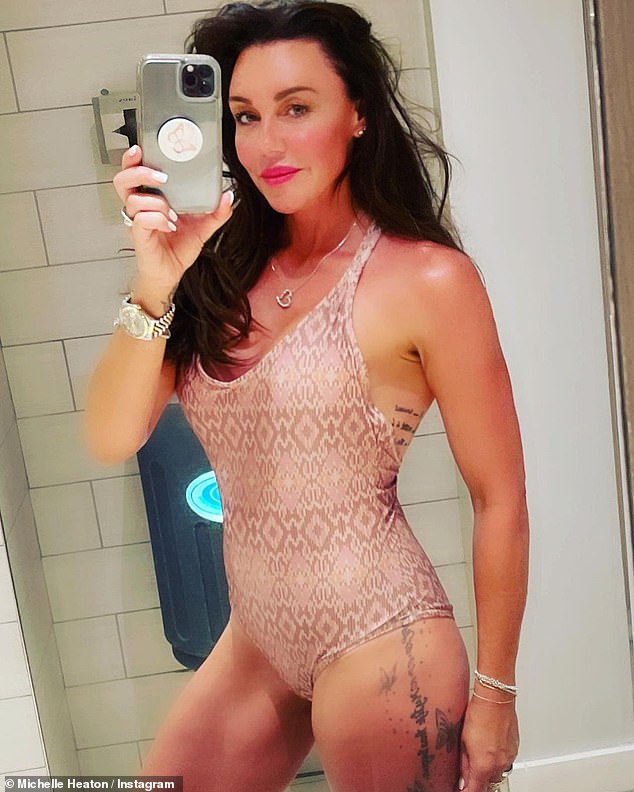 Weekend away: Dressing up to mark the occasions, the singer rocked a statement dark pink lipstick and wore her dark locks loose

The Gateshead-born star was also delighted when she saw their hotel room had been decorated for their anniversary, with rose petals scattered across the bed and two ‘towel swans’ kissing.

Hugh kept the surprises coming, as he also organised a dinner for his wife’s birthday, where they were joined by Nikki Sanderson and Denise Welsh.

She wrote: ‘Well baby @hughhanley you really have pulled it out the bag. For the first time I was actually in the dark.

‘I had no clue I would get to spend this evening with one of my best friends, a friend who has given me so much strength’.

Michelle and Hugh got married in the Bahamas in 2010 and since returning from her rehab stint for drug and alcohol addiction, she has constantly praised him for being her rock. 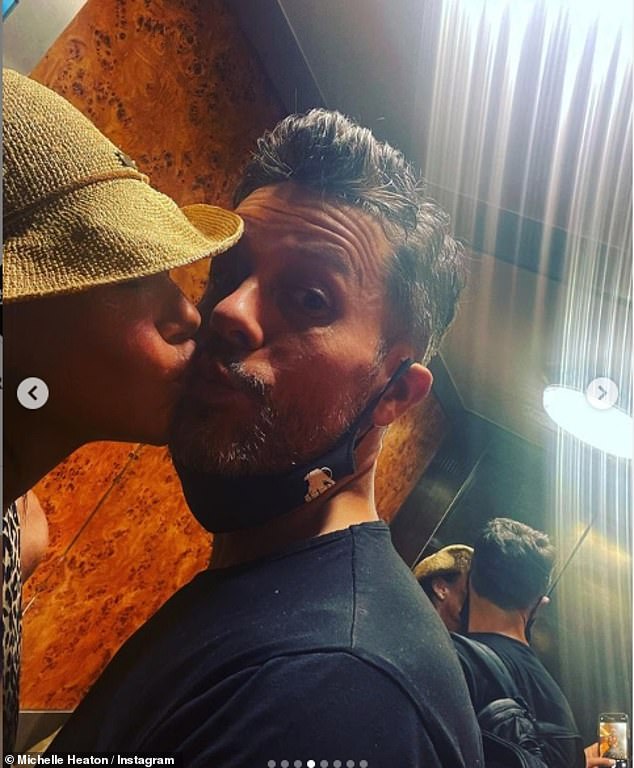 ‘My rock’: The former Liberty X star gushed about her husband Hugh in the post, with the pair celebrating their anniversary – as well as Michelle’s birthday – on Monday