Milla Jovovich opened up about how much she’s enjoying being the mother of a newborn baby back in May.

Now, some eight months after giving birth to her third daughter Osian, the Resident Evil star decided to get in some one-on-one time with her second daughter Dashiel, five.

The pair were seen on their way to and from a Halloween store where they checked out an array of customs and other festive items. 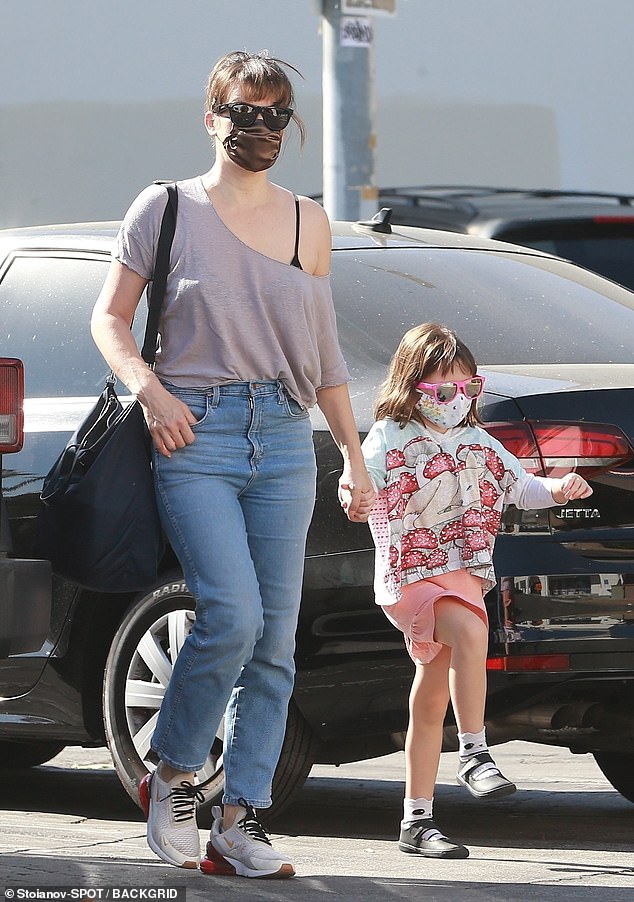 First and foremost, Jovovich put safety first by donning a brown mask over her mouth and nose face mask.

The doting mom had her little girl wear a white-patterned mask amid the still raging COVID-19 pandemic.

Keeping things light and casual, Russian-born actress opted for light blue jeans with a light brown t-shirt that hung off her right shoulder; a style made famous in the 1980s.

She also sported a pair of dark sunglasses and had her brown tresses pulled back into a loose ponytail. 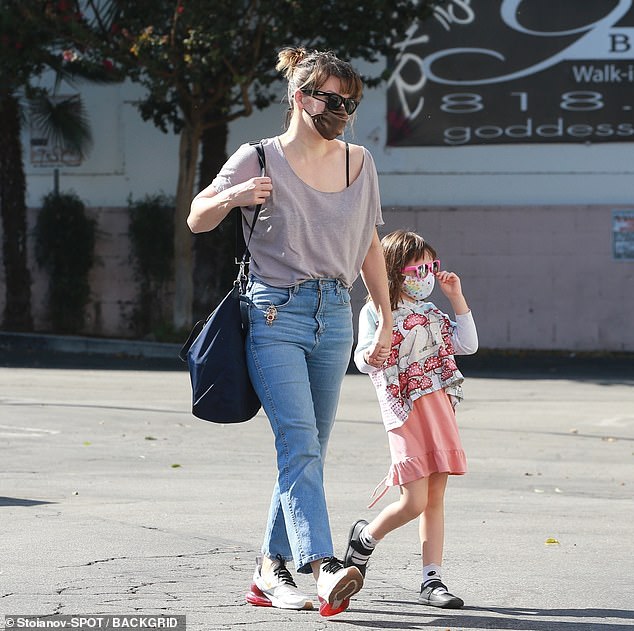 COVID-19 pandemic: The Resident Evil star put safety first as she and her daughter wore protective masks during their time shopping 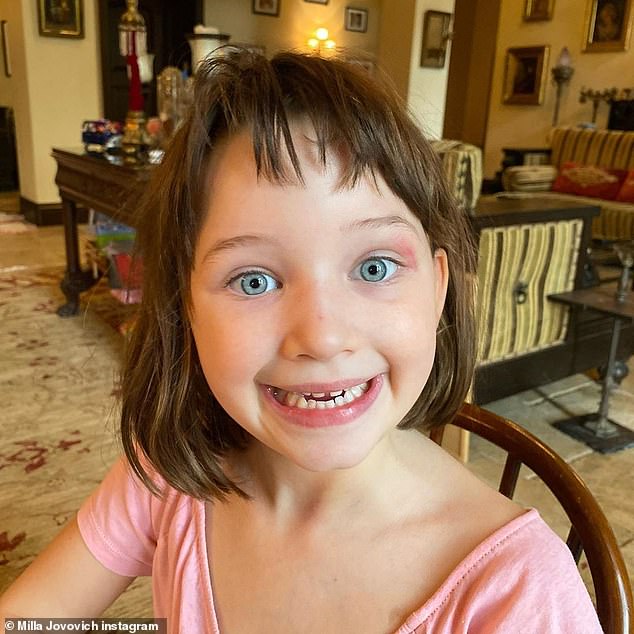 Adorable: With two other daughters at home, Jovovich decided to spend some along time with Dashiel on Monday as they looked at Halloween costumes

At times, she showed off her enthusiasm by skipping her way across the parking lot as her mother held her hand.

Jovovich and filmmaking husband Paul W. S. Anderson also are the proud parents of daughter Ever, 12, and Osian, eight months. 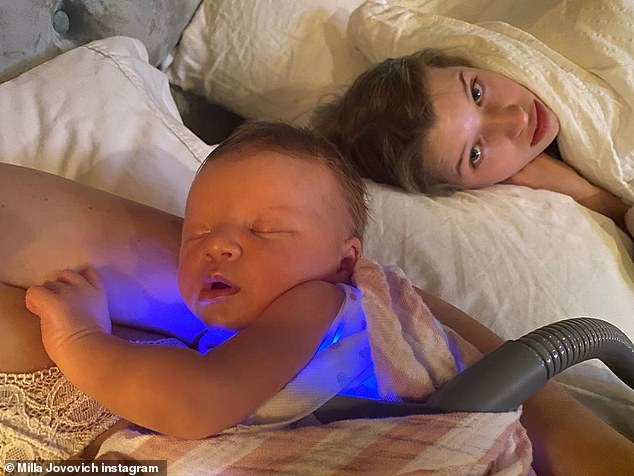 Gift of life: The Russian-born actress gave birth to her third daughter Osian in February 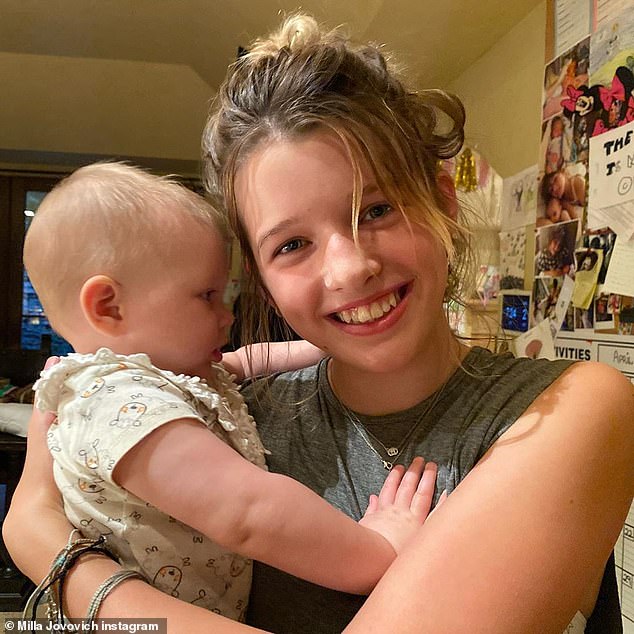 Her mini-me: Jovovich’s look-a-like daughter Ever, 12, has followed her mom into acting

The British-born Anderson is the creative force behind the Resident Evil film franchise that, to date, consists of six movies (2002-2016).

He’s also the writer, producer and director of the upcoming military science fiction fantasy film, Monster Hunter, which is loosely based on the video game series of the same name by Capcom.

Due to the coronavirus crisis, the film’s premiere date has been pushed back to April 23, 2021, after initially being slated to debut this past Labor Day Weekend. Going strong: Jovovich and her filmmaking husband Paul W. S. Anderson, 55,  have been married since 2009 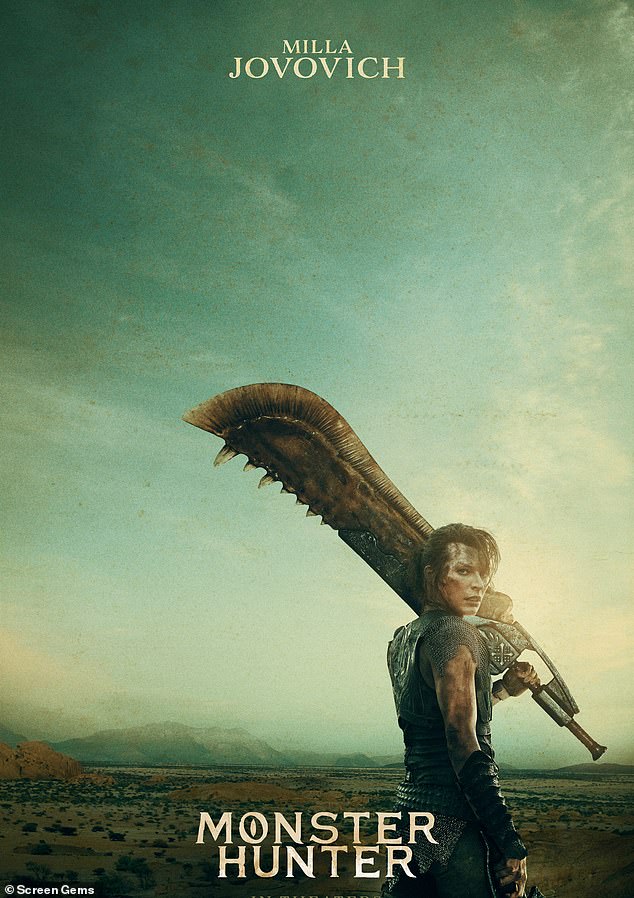 Family affair: Jovovich stars in the military science fiction fantasy film, Monster Hunter, that was written, produced and directed by her husband, Paul W. S. Anderson; the premiere date was pushed back from September 4, 2020 to April 23, 2021 due to the COVID-19 pandemic