The 35-year-old luxury real estate broker — who has been clean since April 2020 — said that there were times on the Bravo show where he was ‘very drunk’ without producers’ knowledge, and watching himself back prompted him to make a change.

Speaking to Page Six, Tyler explained that he was ‘very aware’ he had a ‘problem,’ and referred to alcohol as his ‘dirty little secret,’ before he made the decision to get sober. 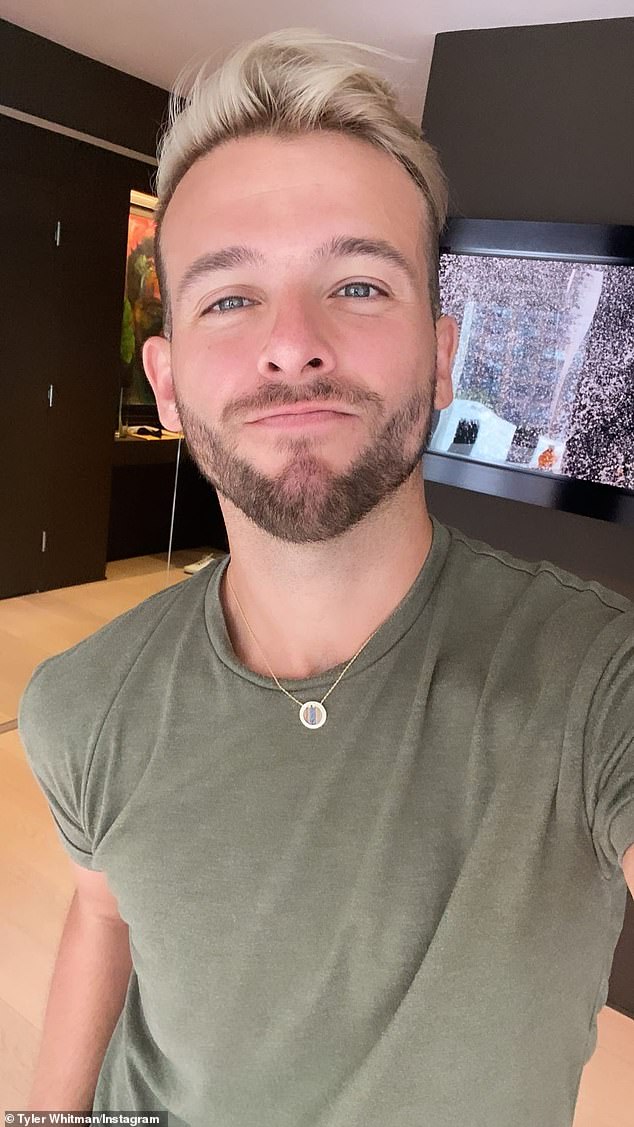 Sober: Million Dollar Listing star Tyler Whitman, 35, opened up about his journey to sobriety in a new interview with Page Six and revealed that he was often ‘very drunk’ while the cameras were rolling without producers’ knowledge

The last time that Whitman had a sip of alcohol was in April 2020. ‘I came home with two bottles of wine on April 15, and I drank them both over tears, and that was the last sip of alcohol I had.’

But the journey to get to where he is now was not easy, as he called his problem a ‘gradual one.’

‘I had been struggling with drinking. It didn’t really start until I turned 30, and then it was gradual. And then by the time I was like 32, 33, it was pretty out of control.’

‘Because I was very high-functioning and I didn’t get, like, the worst hangovers, I was still showing up for work. I wasn’t mean. And so I was kind of just getting away with it,’ he continued to say. 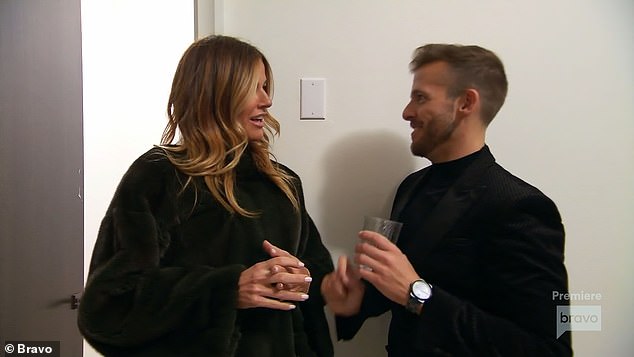 Drink in hand: ‘There were times that the producers and nobody that I was filming with knew but where I knew I was very drunk for the actual scenes, and it was hard for me to watch that’ 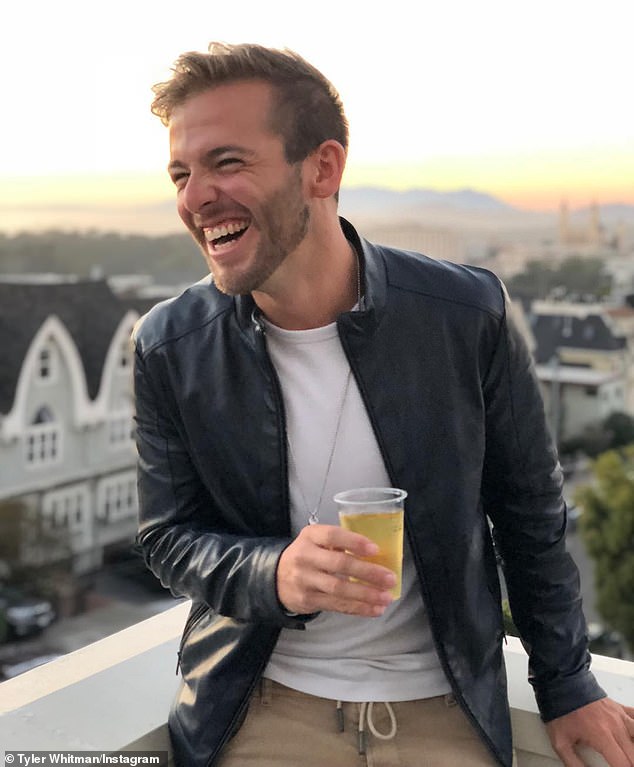 ‘Out of control’: ‘It was basically everything that was pre-pandemic were my darkest days with alcohol,’ he revealed; pictured 2018

Whitman continued to say that there were many times he was ‘very drunk’ while the cameras were rolling, but said being on the show gave him some level of accountability.

‘I know when I was struggling and when I wasn’t on the show, and for me, there is such a clear difference,’ he shared. ‘It was basically everything that was pre-pandemic were my darkest days with alcohol.’

‘There were times that the producers and nobody that I was filming with knew but where I knew I was very drunk for the actual scenes, and it was hard for me to watch that.’ 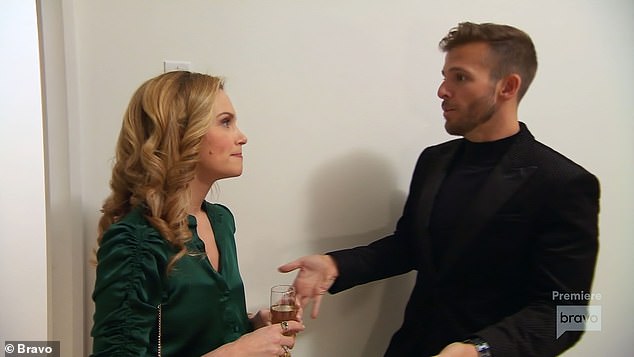 Conflict: One scene in particular that caused him to cringe involved fellow castmate Kirsten Jordan, as he recounted being ‘nasty’ to her while under the influence

Whitman had previously confessed in a June Forbes article that he was consuming up to 12 alcoholic beverages a day but lied to people — namely his life coach — and halved the number.

One scene on the current season of the Bravo show that caused him to cringe involved fellow castmate Kirsten Jordan, as he recounted being ‘nasty’ to her.

‘I remember I was so nervous before that, and I was drinking, and I was like, “That is such like a drunk, you know, immature Tyler reaction.” And then now I see myself, you know, in sobriety, I’m so much more grounded. I’m more patient. I’m more confident.’

And the Triplemint broker realized that the times on camera where he was sober he was ‘understood,’ and was better at his job as he handled work negotiations with dignity. 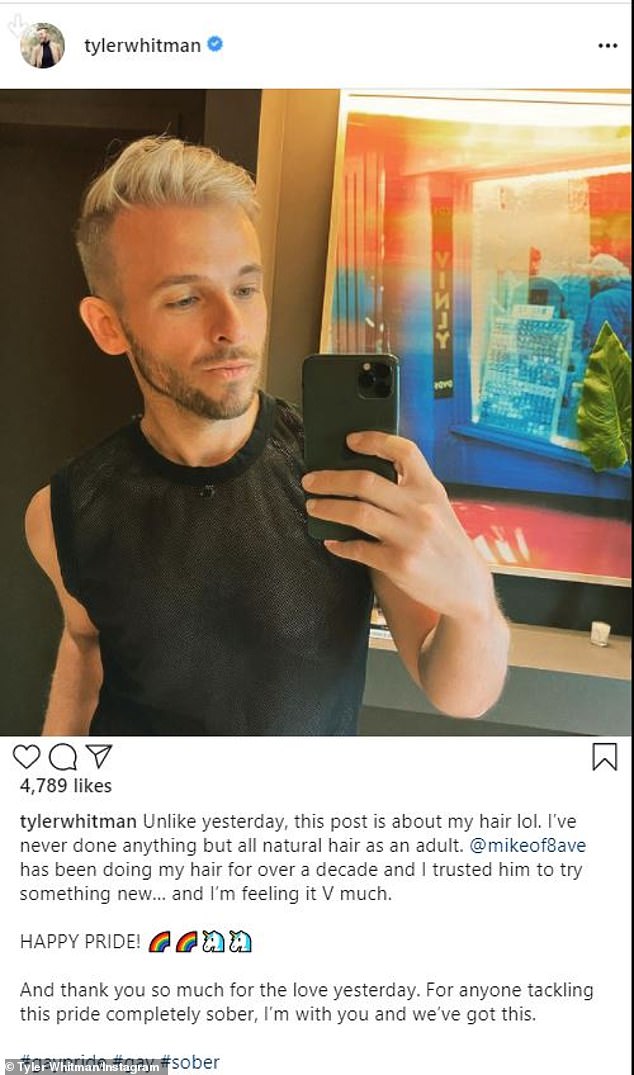 Community: ‘For anyone tackling this pride completely sober, I’m with you and we’ve got this’

‘I wasn’t mean, and I wasn’t rude. I was professional, but I was confident, and I was heard, and I was understood,’ he said of one particular exchange with co-star Fredrik Eklund.

‘That’s who I want to be in this world. Like, that’s the life I want to live.’ That’s been such a gift of this show for me, personally.’

Eklund like Whitman has also been sober and the two have become a support system for each other in some respects.

‘Neither of us knew that each other had quit drinking until we posted it,’ Whitman said of his April 16 Instagram post which read ‘365 days’ and Eklund’s March 25 post. ‘It was nice to be able to connect to him about that.’

Tyler recently celebrated his first pride sober and penned a message of encouragement to any fans who are struggling with addiction. ‘For anyone tackling this pride completely sober, I’m with you and we’ve got this.’ 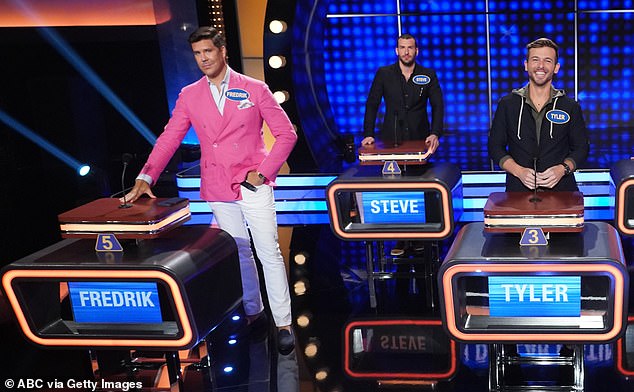 Support system: Both Whitman and Eklund (left) have connected over sobriety, though neither knew the other was sober til their Spring 2021 Instagram posts; pictured July 18