Myleene Klass showed off her toned abs as she stepped out in a bold green trouser suit  in London on Friday.

The former Hear’Say singer, 44, gave a glimpse at her toned midriff while wearing a black crop-top under a bold green trouser suit from her own Next range.

Smooth Radio host Myleene’s jacket featured an animal print lining and she wore a pair of black snakeskin strapped sandals for her outing. 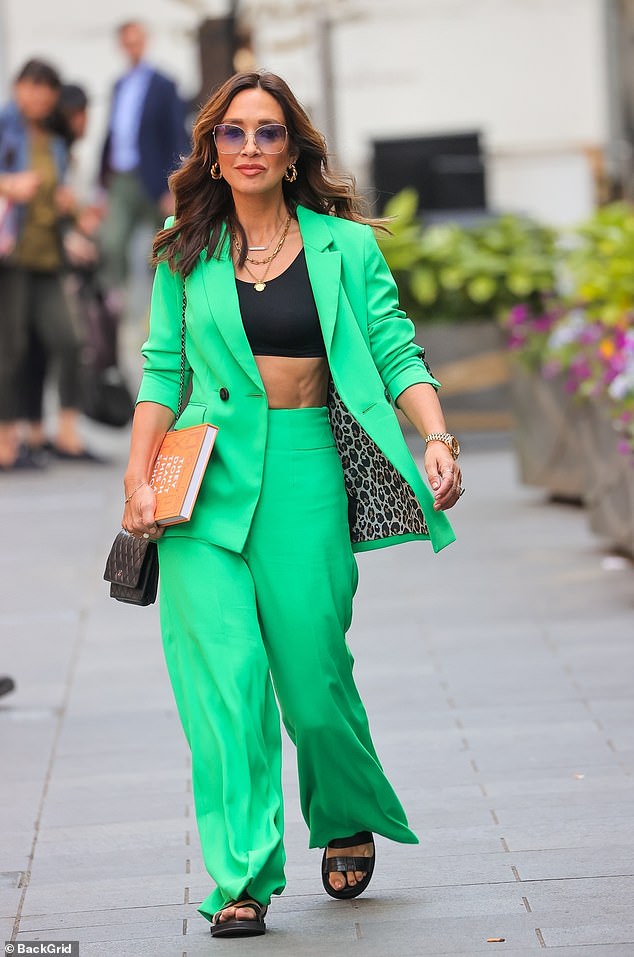 In style: Myleene Klass, 44, showed off her fit physique as she gave a glimpse at her midriff while wearing a brightly coloured outfit from her Next range on Friday

The presenter carried a brown handbag with her and accessorised with plenty of gold jewellery.

She wore a pair of blue tinted sunglasses and carried her book They Don’t Teach This At School with her.

Earlier in the day, Myleene took to her Instagram Stories to share a clip of herself travelling to the Virgin Radio studios.

Fashion focus: The former Hear’Say singer wore a black crop-top underneath the mint green jacket from her trouser suit 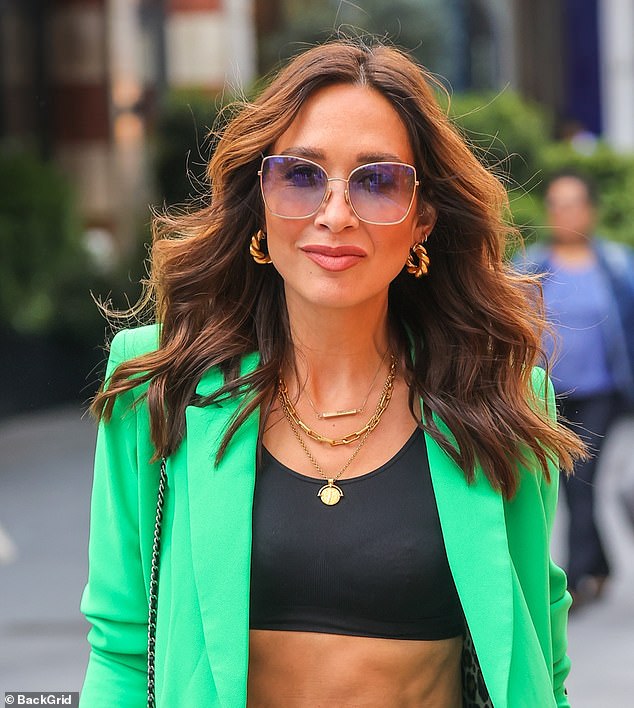 In the detail: The presenter accessorised with plenty of gold jewellery and wore a pair of blue tinted sunglasses

The musician stopped off to talk to breakfast show host Chris Evans about her tome which is billed as a ‘practical guide full of essential skills and knowledge’.

Taking to her Instagram Stories on Friday evening, Myleene shared a picture of herself standing next to her lavish Mercedes G-class at home.

Wearing the same outfit having ditched the outfit, she switched her shoes for some a bright yellow pair of Sketchers trainers. 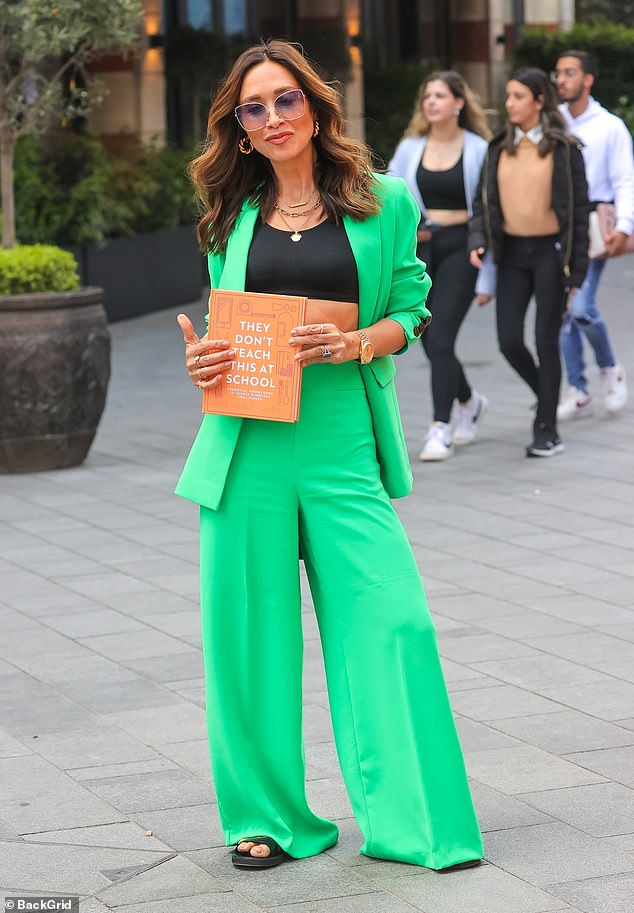 Businesswoman: The musician carried her book They Don’t Teach This At School with her, a tome billed as a ‘practical guide full of essential skills and knowledge’ 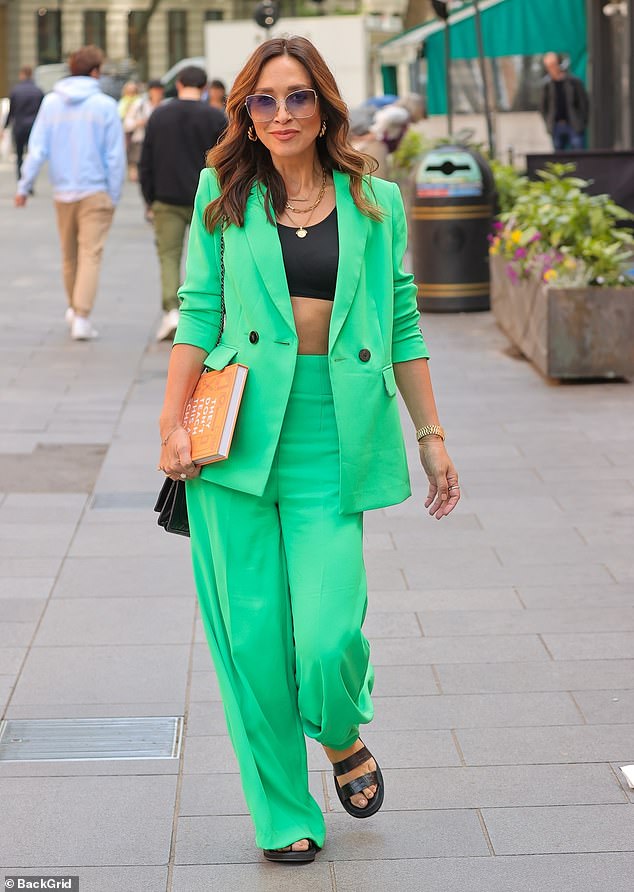 Stepping out: She wore a pair of black snakeskin strapped sandals for her outing and looked glamorous as she walked through London’s Leicester Square

Promoting her book on social media recently, Myleene stressed the importance of teaching first aid in schools after saving both her daughters from choking.

She recalled the moment she was caught off-guard when her daughter Ava, 14, choked on calamari while on holiday four years ago, and when Hero, 11, got a plastic star stuck in her throat when she was 18 months old.

Excerpts of the book were published in The Sun ahead of the its release, with the former Hear’Say star outlining the importance of basic survival skills in the text. 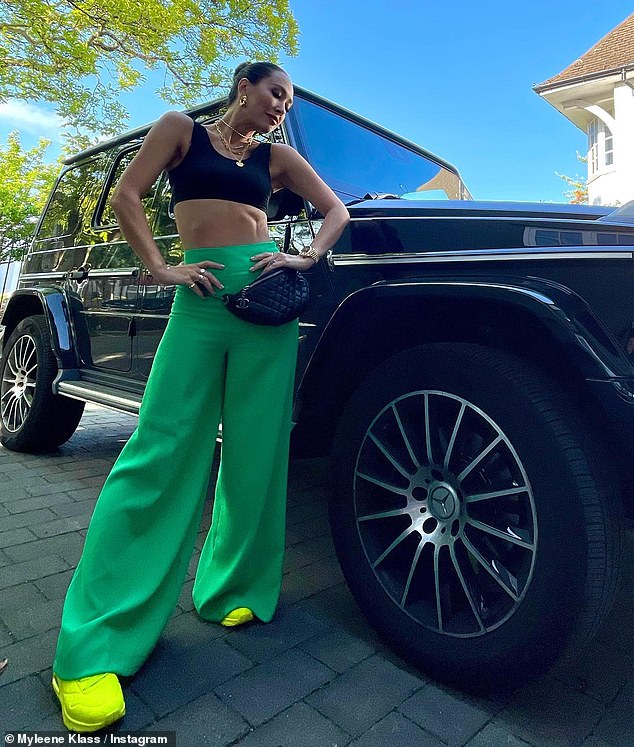 Strike a pose: Taking to her Instagram Stories on Friday evening, Myleene shared a picture of herself standing next to her lavish Mercedes G-class at home

She wrote : ‘A couple of years ago we were relaxing on holiday and my defences were down, so when Ava started to choke on calamari I didn’t immediately realise.

‘Hero choked on a small plastic star when she was one and a half.’

The Smooth Radio host went on to describe the mechanics of what to do if someone is choking, and even shared a step-by-step guide to performing CPR. 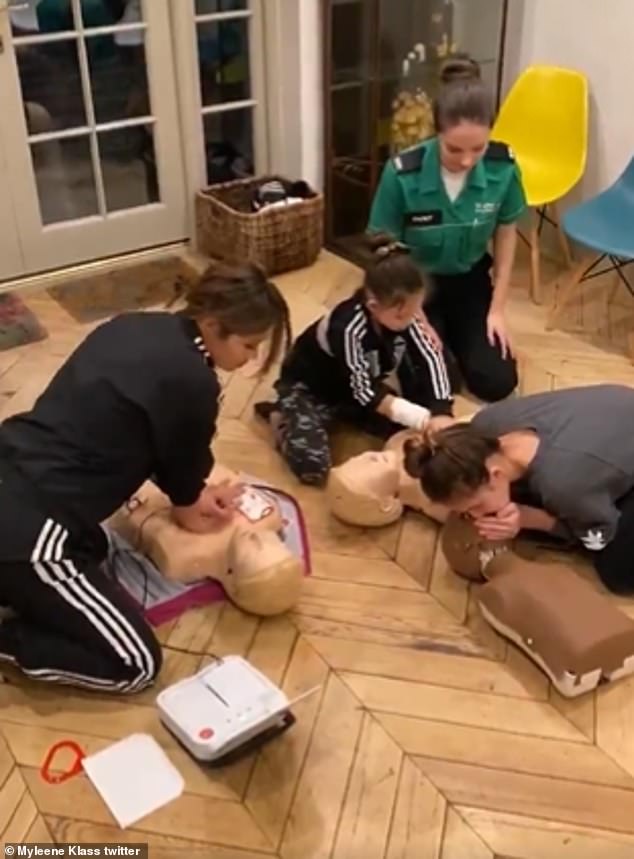 Scary: Myleene recently shared a video of her family learning CPR on Twitter as she recalled the moment daughter Ava, 14, choked on calamari, and when Hero, 11, chocked a star

Myleene’s book also touches on treating jellyfish stings and recognising the signs of a stroke.

She also reminds people to ‘stop, drop and roll’ if they become engulfed in flames, recalling the moment she jumped to the assistance of a woman when her hair extensions caught fire at the launch of one of her classical albums, and when the same happened to a member of a rival pop band at a nightclub.

The former I’m A Celebrity… Get Me Out of Here! campmate has also shared her advice in some handy video explainers on Twitter, recreating emergency scenarios with her children. 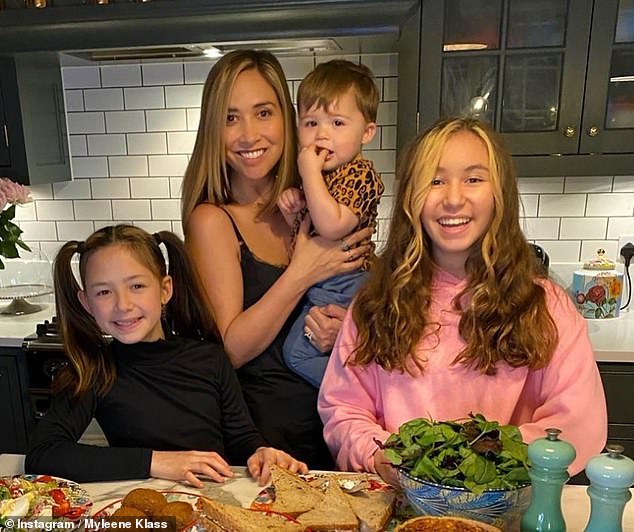 Family: Last month, Myleene spoke of the importance of being prepared for dangerous situations (pictured with daughters Ava and Hero and son Apollo, two)

In a post to her 430,000 followers last month, Myleene spoke of the importance of being prepared for dangerous situations.

She wrote: ‘Just found out we helped a Mother save her baby’s life yesterday after she watched our video on choking.

‘We are all feeling very emotional and relieved after hearing this news.

‘All my safety vids are on TikTok but going to post here too. My book contains all this information BUT *DISCLAIMER* This is a DEMONSTRATION. DO NOT attempt or try this on anyone that doesn’t require actual CPR.

‘NB. The rescue breaths are most relevant to children regarding CPR as the majority of accidents where this is required/used happens around water/pools.’

Myleene, who also shares Apollo, two, with beau Simon Motson, has been vocal about the importance of teaching first aid in schools in the past and was a part of an awareness campaign with St John Ambulance last year. 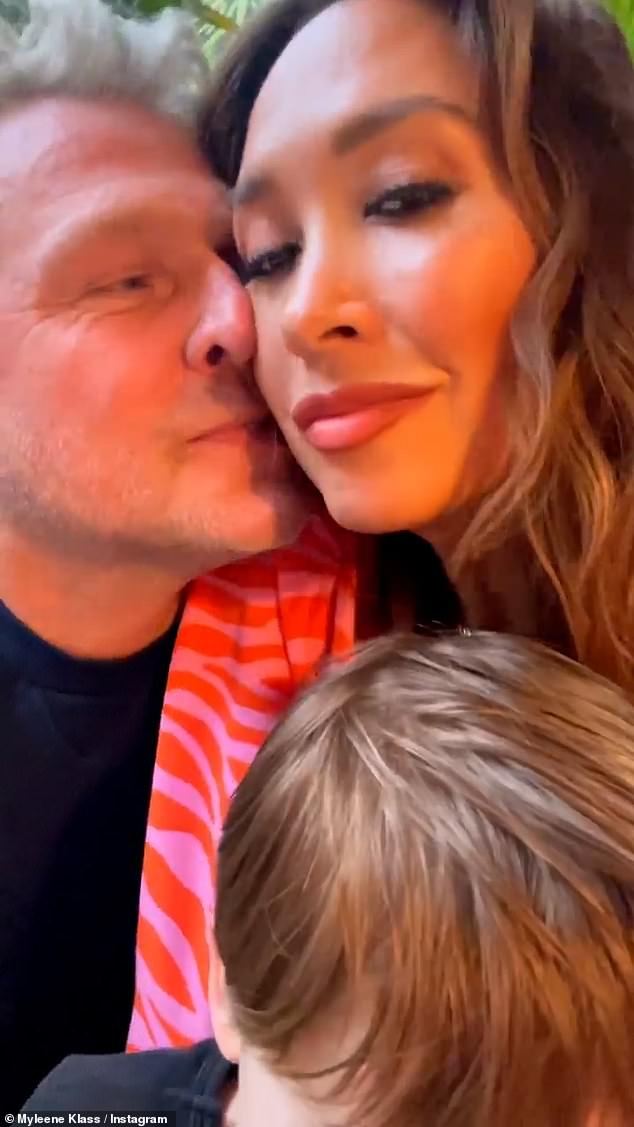 Speaking out: Myleene, who also shares Apollo, two, with beau Simon Motson, has been vocal about the importance of teaching first aid in schools in the past