Nadine Coyle has paid a heartfelt tribute to her late Girls Aloud bandmate Sarah Harding, one week after her death from breast cancer aged 39.

The singer, 36, took to Instagram on Sunday and shared a series of snaps of herself and Sarah taken during their years in the pop group.

Nadine wrote she has been thinking about her friend everyday and said she hopes Sarah knew ‘how much [she] was loved’. 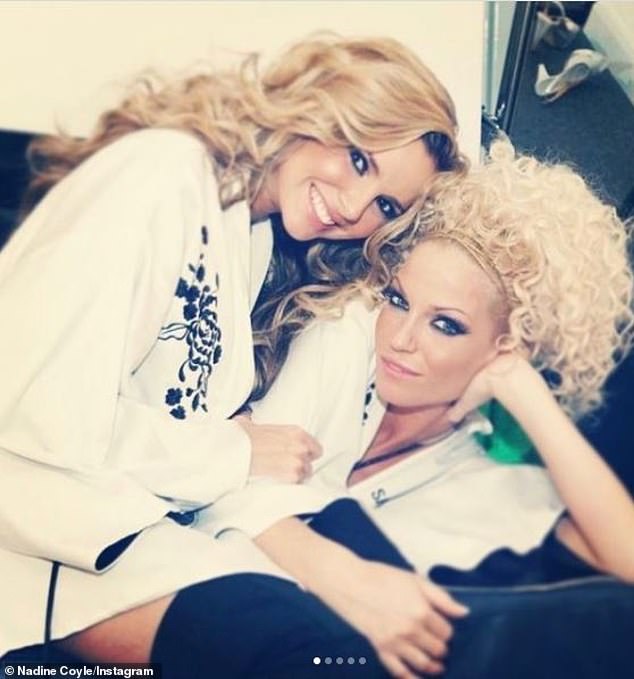 Memories: Nadine Coyle has paid a heartfelt tribute to her late Girls Aloud bandmate Sarah Harding, one week after her death from breast cancer aged 39

She wrote: ‘One week without you!! Thinking of you all day everyday & trying to imagine how your new journey is going. Please feel free to come visit me anytime.

‘I know lots of people will want some Sarah spirit time so I can wait my turn. I hope you now know how much you are loved & how you impacted so many lives by being wholeheartedly yourself.

‘Always an inspiration, always a shining light & always my friend!!’

Sarah passed away on September 5, with her death confirmed by her mother Maria in a statement shared to the star’s Instagram account. 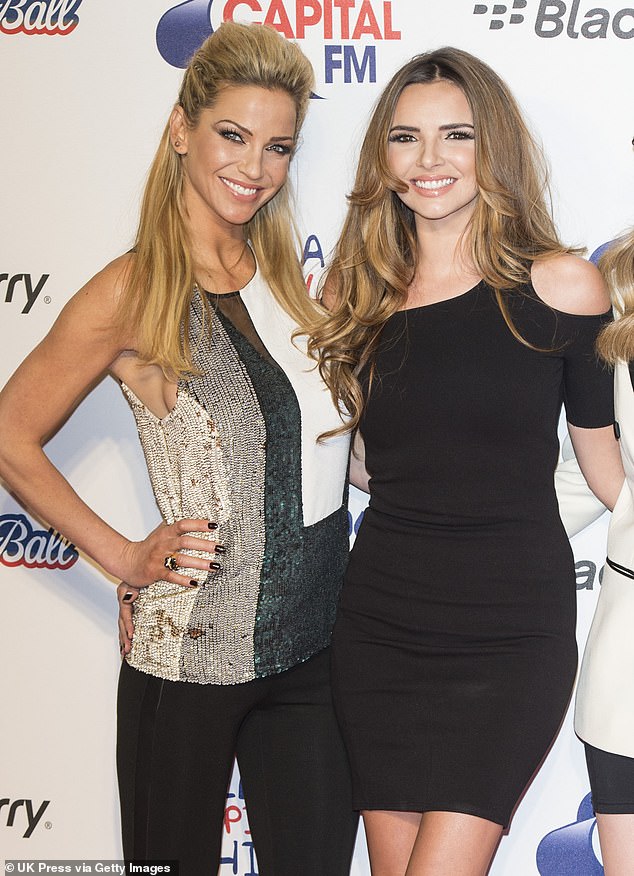 Tribute: The singer, 36, took to Instagram on Sunday and shared a series of snaps of herself and Sarah taken during their years in the pop group 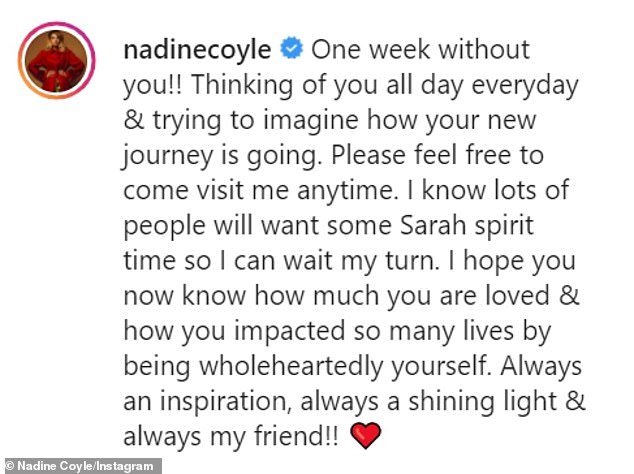 Message: Nadine wrote she has been thinking about her friend everyday and said she hopes Sarah knew ‘how much [she] was loved’

Nadine paid tribute to Sarah in the hours after her passing, writing: ‘I am absolutely devastated!! I can’t think of words that could possibly express how I feel about this girl & what she means to me!! I know so many of you will be feeling this way. For now I’m sending so much love to you!!!’

This was followed by an outpouring of heartfelt messages by Sarah’s other Girls Aloud bandmates Nicola Roberts, Kimberley Walsh and Cheryl.

Cheryl wrote: ‘Although we knew this day would arrive I am somehow still feeling at a loss for words that our stunning, unique, crazy, quirky, kind and soft hearted girl has departed.

‘As I try to navigate my way through these painfully strange and horribly unfamiliar waves of disbelief & finality I am experiencing, I wanted to extend my condolences to all of our GA fans. We were like an extended family for so long and we know so many of you by name. 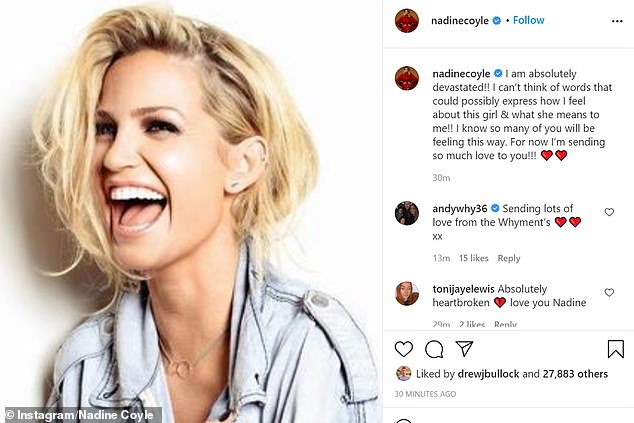 RIP: Nadine was the first member of the band to pay tribute on social media as she shared a photo of Sarah along with a heartfelt message

‘I wanted to make sure you knew just how much your love and continued support meant to Sarah through her most vulnerable times. She was so grateful and you really lifted her spirits when she needed you most… I also realize so many will be deeply affected by the circumstances of Sarah’s passing… I am sending you all so much love. I love you Sarah… farewell.’

Kimberley penned: ‘Beautiful Sarah this hurts so bad. To wake up and know that you are really gone is too much to bear. Hearing your infectious chuckle was one of my favourite things in the world…

‘Your fire burned so bright and you loved, lived and laughed so hard. Sending love and strength to everyone who is grieving today. My heart is broken’.

Meanwhile, Nicola said ‘my heart is aching’ as she posted photos of the pair on their first video shoot for Sound of the Underground back in 2002 – shortly after they were formed on Popstars: The Rivals. 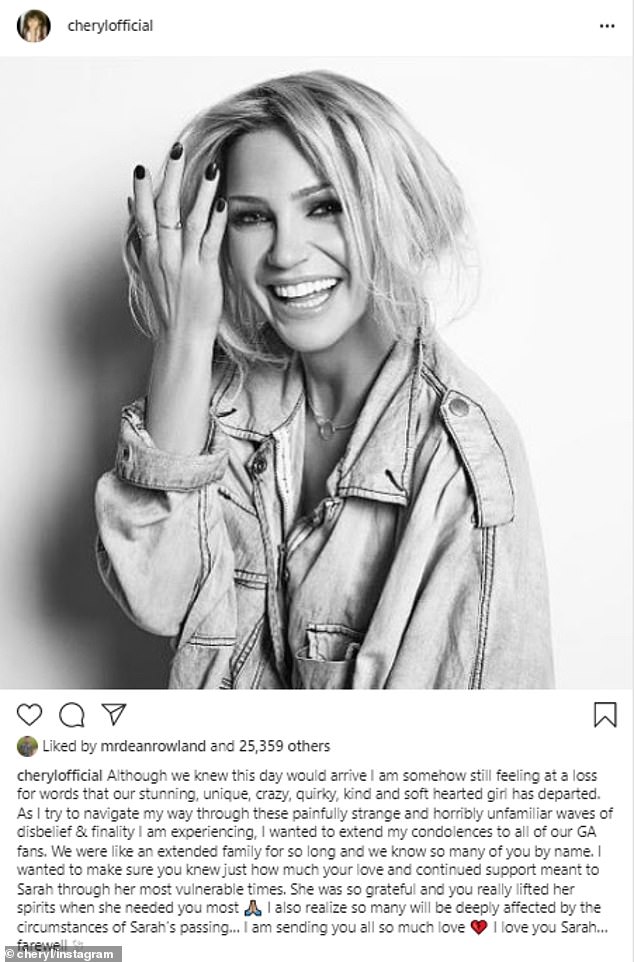 She wrote: ‘I’m absolutely devastated and I can’t accept that this day has come. My heart is aching and all day everything we went through together has raced round my mind.

‘Especially this last year since her diagnosis, as hard as the year has been, our new memories are strong in my heart. There are so many things to say and at first it felt to personal to put them here and then I remembered that there are so many other people grieving her too.

‘A part of me or us isn’t here anymore and it’s unthinkable and painful and utterly cruel. She would have loved your messages today.

‘Electric girl, you made us. You gave it everything and still with a smile. A white butterfly flew past my window this morning before I knew, it must have been you.’ 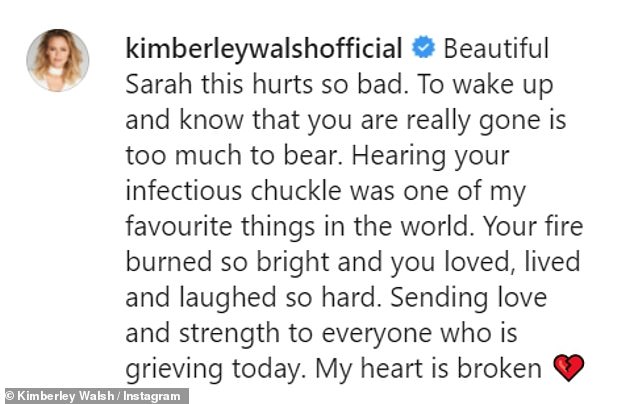 Confirming Sarah’s passing, her mother Marie wrote: ‘It’s with deep heartbreak that today I’m sharing the news that my beautiful daughter Sarah has sadly passed away.

‘Many of you will know of Sarah’s battle with cancer and that she fought so strongly from her diagnosis until her last day.

‘She slipped away peacefully this morning. I’d like to thank everyone for their kind support over the past year. It meant the world to Sarah and it gave her great strength and comfort to know she was loved.

‘I know she won’t want to be remembered for her fight against this terrible disease – she was a bright shining star and I hope that’s how she can be remembered instead. Marie x’. 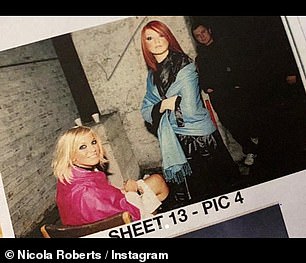 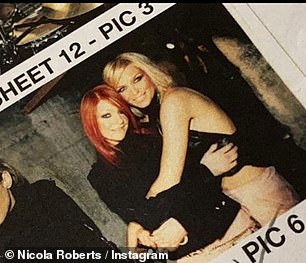 Memories: Nicola said ‘my heart is aching’ as she posted photos of the pair on their first video shoot for Sound of the Underground back in 2002 – shortly after they were formed on Popstars: The Rivals 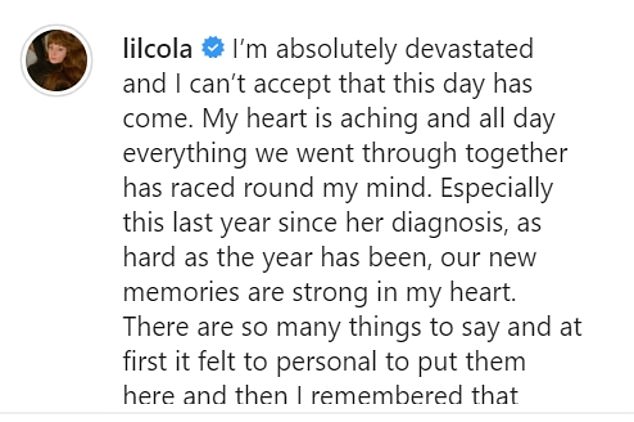 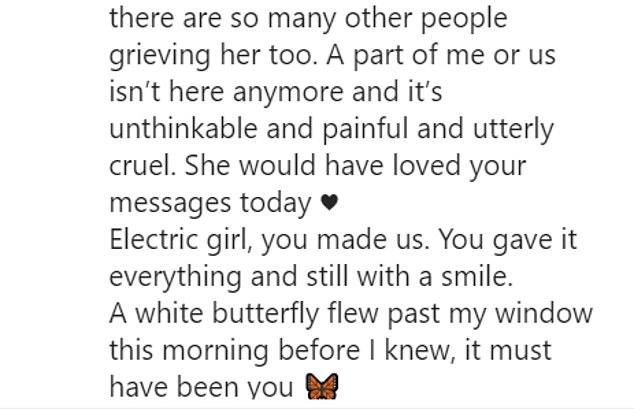 A sign: Nicola said she believed she had received a sign from Sarah before her death was announced

Born in Ascot, Berkshire, in 1981, Sarah spent most of her school years in Stockport, Greater Manchester. She worked in a nightclub promotions team after leaving school.

She also toured North West England performing at pubs, social clubs, and caravan parks to support herself while pushing for a career in the arts.

Sarah found fame in 2002 when she won a place on Popstars: The Rivals – a precursor to the Pop Idol franchise.

She teamed up with, Cheryl, Nadine, Nicola and Kimberley in Girls Aloud and the band took the UK by storm soon after. 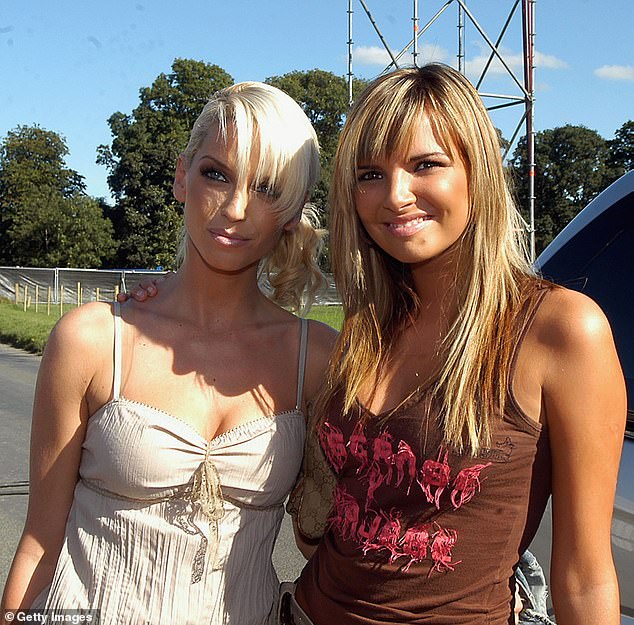 Bandmates: Sarah and Nadine are pictured in 2004 in Dublin, Ireland

The group achieved twenty consecutive top ten singles – including four number ones – in the UK and six platinum studio albums before the band took a hiatus in 2009.

Sarah was reportedly planning a solo career as a blues singer prior to her cancer diagnosis and had been honing her skills as a guitarist before the diagnosis last August.

Speaking to The Sun, a source said: ‘Sarah really wanted to revamp herself as an altogether different kind of artist to her Girls Aloud days. She was on a journey to find herself musically and re-brand as a blues artist, as that’s where her passion is.

‘She was playing guitar all night until her fingers bled and watching videos of her favourite performers in order to perfect her sound.

‘Her health issues meant she didn’t get a chance to lay down any tracks, but there’s hope she will ­eventually be well enough to put out the kind of music she loves.

‘She was looking forward to being in the driving seat and surprising people.’ 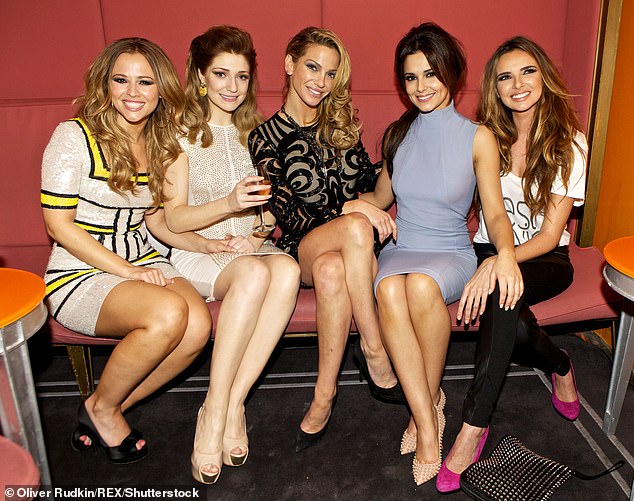 Sarah previously revealed she was taking cannabis oil to ease her pain as she continued to undergo treatment for breast cancer.

It comes after Sarah revealed tumours in her brain and lung had shrunk with treatment.

The musician revealed she had been battling breast cancer in August 2020 and had said she did not know how many months she had left to live after her cancer spread to her spine.

The media personality spoke of her joy that treatment – including weekly chemotherapy sessions – had achieved this milestone and that she was able to enjoy a ‘relaxing Christmas.’

In her book Hear Me Out, Sarah wrote: ‘MRI scans at the end of December revealed that the tumours in my brain and in my lung have shrunk a bit with the treatment.’ 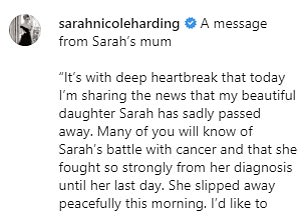 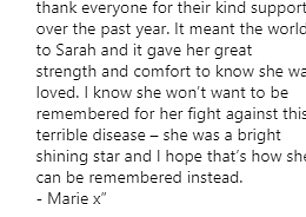 A message from Sarah’s mother Marie was posted to her Instagram account. It read: ‘It’s with deep heartbreak that today I’m sharing the news that my beautiful daughter Sarah has sadly passed away’

The TV star said that while she didn’t know ‘exactly what this means’, ‘right now, every little victory feels momentous.

She continued: ‘With this news under my belt, I was able to enjoy a relaxing quiet Christmas with mum and yes, I got plenty of lovely Christmas pressies.’

Sarah ended the book with: ‘At the moment, I’m just grateful to wake up every day and live my best life, because now I know just how precious it is.’

In a further excerpt from the book, shared by The Times, Sarah said Christmas 2020 was ‘probably her last.’

She penned: ‘In December my doctor told me that the upcoming Christmas would probably be my last. I don’t want an exact prognosis. I don’t know why anyone would want that…

‘Comfort and being as pain-free as possible is what’s important to me now. I’m trying to live and enjoy every second of my life, however long it might be. I am having a glass of wine or two during all this, because it helps me relax.’

The singer added that she wanted to try and ‘enjoy’ herself as she didn’t know ‘how many months I’ve got left’. 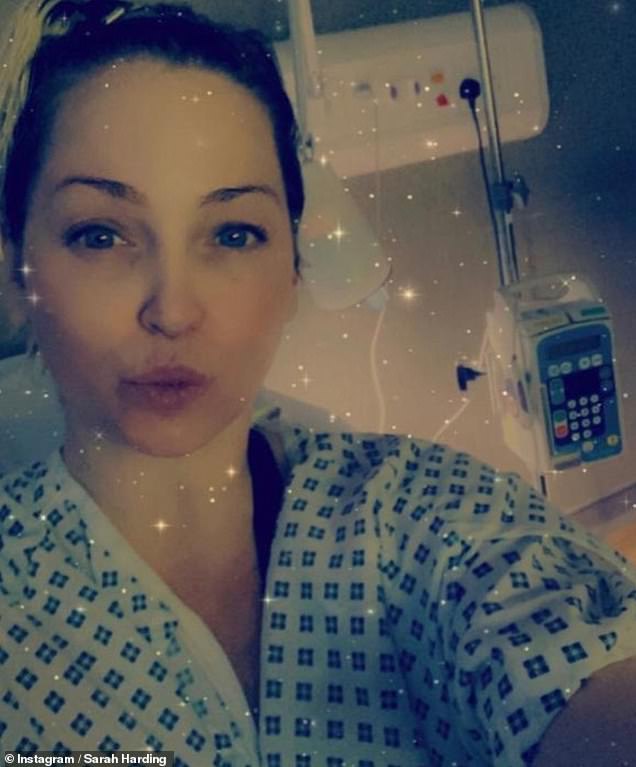 Memoir: In her book Hear Me Out, Sarah wrote: ‘I’m trying to live and enjoy every second of my life, however long it might be’

What is breast cancer?

Breast cancer develops from a cancerous cell which develops in the lining of a duct or lobule in one of the breasts.

When the breast cancer has spread into surrounding breast tissue it is called an ‘invasive’ breast cancer. Some people are diagnosed with ‘carcinoma in situ’, where no cancer cells have grown beyond the duct or lobule.

Most cases develop in women over the age of 50 but younger women are sometimes affected. Breast cancer can develop in men though this is rare.

Staging means how big the cancer is and whether it has spread. Stage 1 is the earliest stage and stage 4 means the cancer has spread to another part of the body.

The cancerous cells are graded from low, which means a slow growth, to high, which is fast growing. High grade cancers are more likely to come back after they have first been treated.

A cancerous tumour starts from one abnormal cell. The exact reason why a cell becomes cancerous is unclear. It is thought that something damages or alters certain genes in the cell. This makes the cell abnormal and multiply ‘out of control’.

Although breast cancer can develop for no apparent reason, there are some risk factors that can increase the chance of developing breast cancer, such as genetics.

What are the symptoms of breast cancer?

The usual first symptom is a painless lump in the breast, although most breast lumps are not cancerous and are fluid filled cysts, which are benign.

The first place that breast cancer usually spreads to is the lymph nodes in the armpit. If this occurs you will develop a swelling or lump in an armpit.

How is breast cancer diagnosed?

If you are confirmed to have breast cancer, further tests may be needed to assess if it has spread. For example, blood tests, an ultrasound scan of the liver or a chest x-ray.

How is breast cancer treated?

Treatment options which may be considered include surgery, chemotherapy, radiotherapy and hormone treatment. Often a combination of two or more of these treatments are used.

How successful is treatment?

The outlook is best in those who are diagnosed when the cancer is still small, and has not spread. Surgical removal of a tumour in an early stage may then give a good chance of cure.

The routine mammography offered to women between the ages of 50 and 70 mean more breast cancers are being diagnosed and treated at an early stage.