Four weeks ago, the Titans were sobering up after losing to the Jets. Now they’ve bullied two AFC heavyweights and look the business. Work that one out.

The Bengals are the AFC’s top seed after blowing out Baltimore and the Bucs are still the team to beat in the NFC. Or is it the still overlooked Arizona?

The Raiders are the AFC’s second seed with Derek Carr playing the best football of his career, while things look less rosy for Patrick Mahomes, Sam Darnold and Jared Goff.

There may be trouble ahead in San Francisco and a Bucs fan earned a fortune for a slice of good fortune – but could he have pocketed more?

Tom Brady threw his 600th touchdown pass. That’s right, 600. More than four franchises – the Jaguars, Panthers and Ravens and Texans – have scored in their history. 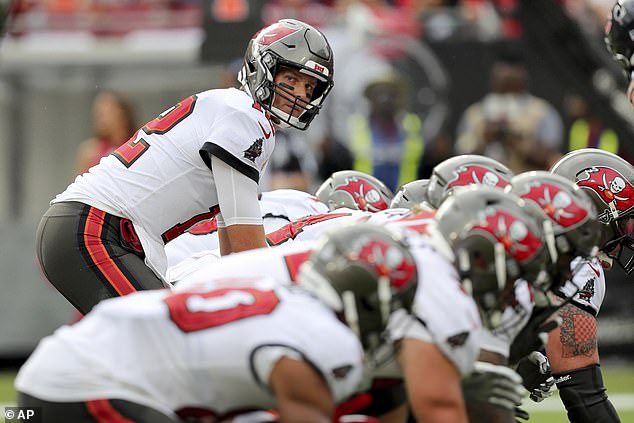 Anyhow, after catching the pass which launched the 600 Club, receiver Mike Evans was unaware of the ball’s significance and handed to Byron Kennedy, a fan wearing his jersey.

After a brief negotiation, a Buccaneers staff member recovered the ball.

‘That was really cool of him to do that,’ Brady said after the game.

‘I don’t actually keep too many things. In that circumstance, I thought that might be a good one to keep.’

The Bucs announced his reward: two signed Brady jerseys, a helmet, another jersey autographed by Evans and Evans’ game-worn cleats.

But opinion has been divided: should Kennedy have given up the trinket so easily, or should he have scarpered from the stadium?

‘Byron lost all his leverage when he gave up the ball,’ Brady joked with Eli and Peyton on the Manning Cast. ‘He should’ve held it… I’m also giving him a Bitcoin, so at the end of the day, I think he’s making out pretty well.’

“He lost all of his leverage once he gave the ball away.”@TomBrady got his 600th TD ball back. It’ll cost him some bitcoin 😂⁰⁰📺: ESPN2 pic.twitter.com/wsY0IH7xKs

HISTORY IN THE MAKING

Last season a former LSU receiver ripped up the record books in his first NFL season.

But Ja’Marr Chase is on pace to shatter Justin Jefferson’s rookie record of 1,400 receiving yards – and could be the first rookie first team All-Pro receiver since Randy Moss. 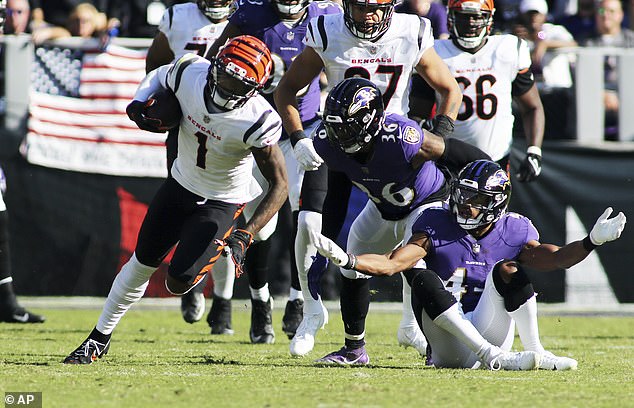 At 21, Chase leads the AFC in yards and his six touchdown receptions ties the lead in the conference too.

As in their outstanding 2019 college season, Joe Burrow and Chase are combining to put the Bengals well ahead of schedule.

This is the best cover guy the Ravens have and one of the best in this league.

Jamarr Chase treated him as if he wasn’t there pic.twitter.com/lQkyUsGLGN

Ja’Marr Chase has more receiving yards through his first seven games than any player in NFL history. He’s at 720+ with a quarter left to go and only two other players have topped 600.

Ja’Marr Chase is a freak

when blitzed, Joe Burrow has targeted Chase for a NFL-high 291 yards

vs Baltimore, Chase had 147 of his 201 yards when Burrow was blitzed & needed to get rid of the ball@DanPizzuta explains why Burrow to Chase has been magic:https://t.co/Te7XuOwr2Y pic.twitter.com/GmZyLHAkfU

Kyle Pitts was drafted higher than any other tight end in history. With George Kittle, Rob Gronkowski and Darren Waller out injured, he showed why on the ludicrously hyped national tight ends day.

Two weeks after his last game, a career day at Tottenham, Pitts put on 163 yards – including this highlight reel grab.

KYLE PITTS WITH ONE HAND. #NationalTightEndsDay

Bill Belichick once coached the Jets for a day.

His rivalry with the franchise reached its peak in 2007 when then Jets head coach Eric Mangini – a former Pats staffer – reported the Patriots to the NFL for illegally filming practices.

So it came as little surprise that the Patriots were fired up to beat the Jets for the 12th time in a row.

‘Yeah that’s so far in the past, I don’t really think about that,’ Belichick explained. ‘Really I just am trying to think about what I can do to help our team perform better and do a good job for the Patriots. That’s all in the rear view mirror, it’s really for me just looking ahead and trying to do a good job with this team. I need to do a better job so I’ll just focus on that.’ 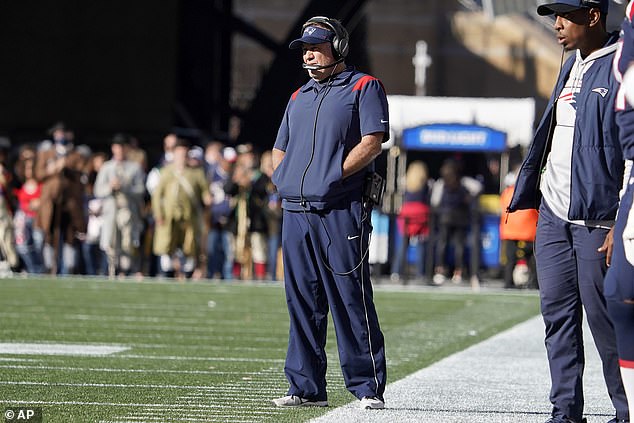 There may have been extenuating circumstances – the Jets failed to score in the first quarter again and Zach Wilson is out for 2-4 weeks after suffering a knee injury – but the Patriots capped their win with Brian Hoyer putting the Pats past the 50-point mark as time expired.

‘I really have a lot of respect for these guys,’ Belichick said of his team. ‘They come to work every day. We’ve improved every day, really every week. We’re far from perfect and far from where we need to be, but we’re heading in the right direction.’

Postgame scene from Gillette Stadium: Bill Belichick and Matt Patricia celebrating the win in Optum lounge with a few others.

Belichick with a Budweiser, Patricia a Corona. pic.twitter.com/HEt2bBrmAc

Little to write home about after MNF as the Saints clawed a 13-10 victory in Seattle.

The pre-game show was worth watching as a nervous Randy Moss came face to face with Seattle’s mascot, Taima the augur hawk.

.@RandyMoss was a little nervous to kick it with the Seahawks’ mascot 😅 pic.twitter.com/Ij6KWwISJr

Oh, and here’s the best bits from the Manning Cast…

The weather was terrible in Santa Clara – something called a bomb cyclone was swirling overhead before SNF.

The dramatic downpour continued and accompanied another defeat – a fourth straight – as the 49ers fell to a distinctly average Indianapolis. 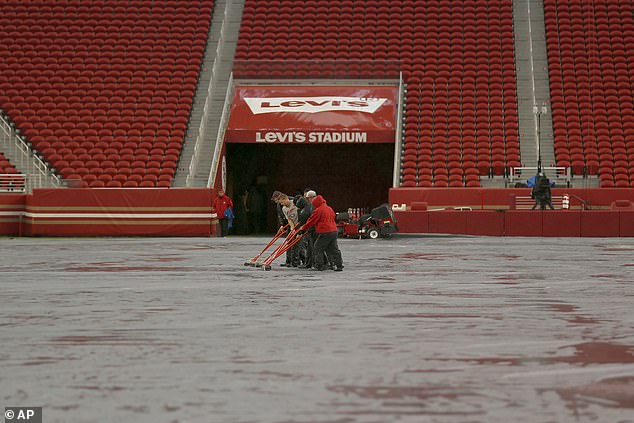 It was a strange game, filled with mistakes and pass interference calls. Jimmy Garoppolo had a mare with a fumble and two interceptions doing little to silence the quarterback controversy which has brewing since the Niners drafted Trey Lance.

It was the Colts’ first visit to Levi’s Stadium; they have won there more times this season than the 49ers have. 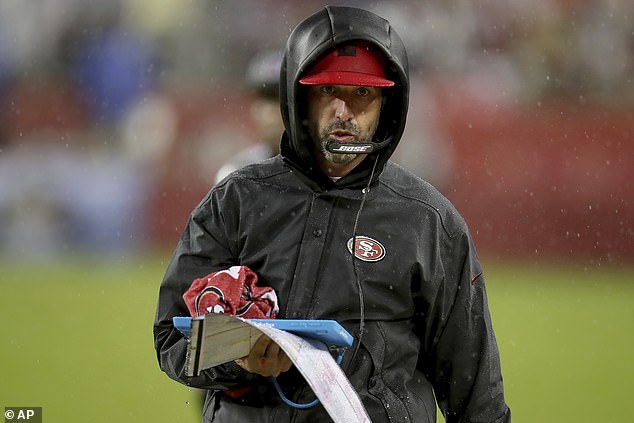 The 49ers last won at home a year ago and that Super Bowl LIV appearance seems a long way away, as head coach Kyle Shanahan finds himself in the hot seat.

‘We’ve lost four games in a row,’ Shanahan said. ‘I’m the head coach of this team… I expect it and I deserve it.’

‘They’re pretty down in there,’ he said of his soaked side. ‘Four games in a row. It’s been a month.’

GOFF GOES OUT WITH A WHIMPER

It’s tough not to feel for the Lions, who tried everything to beat the Rams.

As it turns out, having Jared Goff proved their undoing after special teams wizardry on fourth downs put Detroit in contention for a first win.

But against a tiring defense, Goff threw a costly interception, which was gratefully snaffled by former team-mate Jalen Ramsey.

Detroit getting the first overall pick, Dan Campbell looking like a great guy to play for, going for it on a bunch of fourth downs, and the team playing hard every week seems like a pretty good deal for the 2021 Lions.