The centre forward who refuses to go quietly appears on a Zoom call from Milan at 9am sharp. It’s unusual. Footballers are never on time.

‘I am a striker,’ laughs Olivier Giroud. ‘I am paid to be in the right place at the right moment.’

His career statistics tell us the 35-year-old has been good at it. More than a goal every two Premier League starts for Arsenal and Chelsea. Forty-six goals for France. Four FA Cups, a Champions League, a Europa League, a Ligue 1 title. A World Cup! 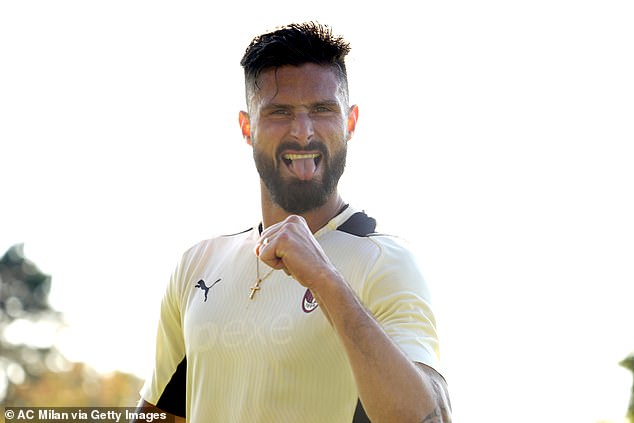 So why is it that Giroud has seemingly spent so much of his career trying to prove people wrong? Why has he had to fight for his place in so many teams, so often? Why indeed has he always had to keep bouncing back?

‘Overcoming difficulties and doubts has been very important for me over the years,’ Giroud tells Sportsmail. ‘Yeah, bouncing back. That’s me. My friends and my brother used to say I was always at my best when I had my back to the wall.

‘I wish things could have been a bit smoother in my career at times but you can’t always explain it.

‘It’s not like I was missing big chances all the time. But I know it’s part of my career and my life and I accept it even though at some points it was difficult because you always want more. 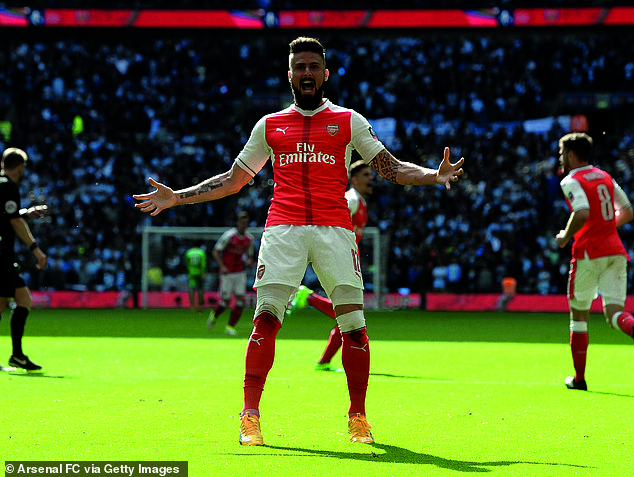 Giroud spent five and a half seasons at Arsenal (pictured), and three and a half with Chelsea 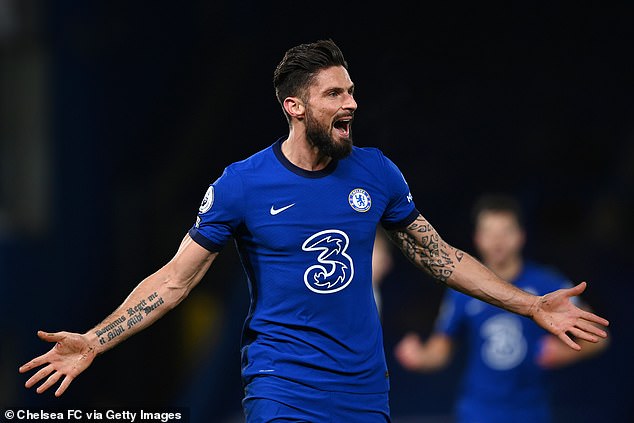 ‘If you told me 20 years ago that I would win so many trophies and experience so many amazing things I would never have imagined it. I feel very grateful.’

Giroud spent nine years in England. Five and a half seasons with Arsenal and the following three and a half with Chelsea. He was successful but always, it seems, eventually replaced.

At Arsenal it was Alexandre Lacazette and Pierre-Emerick Aubameyang. At Chelsea it was Tammy Abraham and then Gonzalo Higuain.

In his new book Always Believe, Giroud talks of the stress and anxiety of the constant search for recognition but also with convincing fondness of his time in England. Settling in now at AC Milan, he nevertheless misses London already and – had things been different – could even have stayed.

In January 2020, so disheartened was he with a lack of playing time under Frank Lampard at Chelsea that he briefly considered a move to Tottenham.

‘Well, there was a very small chance,’ he smiles. ‘I said to Frank I was so determined to leave and play. I told him I had Lazio, Inter and, yes, even Tottenham.

‘To be honest, it would not have been a good idea for me as a Gooner for five and a half years to go to Tottenham, would it? I would have disappointed so many people but this whole thing is part of what footballers have to deal with. 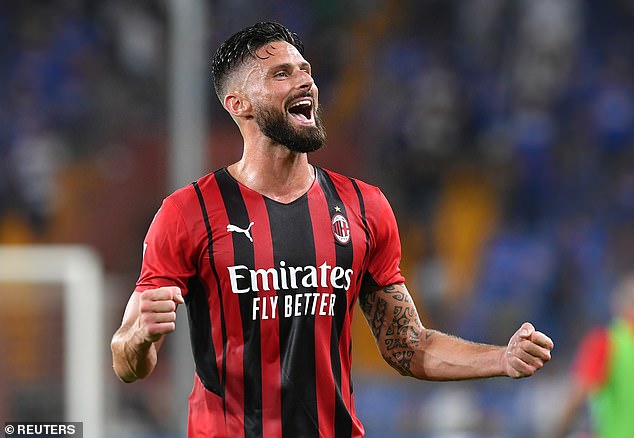 Settling in with AC Milan, Giroud admits he misses London already and could even have stayed

‘People only see the good aspects of this job but you have to make sacrifices and deal with things not going your way. It’s important to always fight against this and dialogue is so important. With Lampard, I explained I needed to be happy again. I asked him to give me that opportunity in another team. I wanted him to understand me.

‘I told him that you cannot play with a footballer’s career like that. He understood my emotions and I am grateful because I stayed and things went well after that. He eventually gave me the chance to achieve great things with Chelsea again. To play again. And I scored goals and contributed to us qualifying for the Champions League.

‘So it was a good answer in the end. Another bounce back.’

Thierry Henry has scored more goals for the French national team, 51, than anybody. Five goals behind is Olivier Giroud.

Giroud loves his country and won the French league title with Montpellier in 2012. But sections of the French support have never loved him back, largely because he played for the national side during a five-year period between 2015 and 2020 when Karim Benzema was not being selected.

In that time, France reached the final of Euro 2016 – losing to Portugal in Paris – and won the World Cup in Russia two years later. But in his book, Giroud describes himself as a scapegoat and his personal difficulties reached a nadir in the run-up to the 2016 finals when he was booed during a friendly against Cameroon in Nantes. 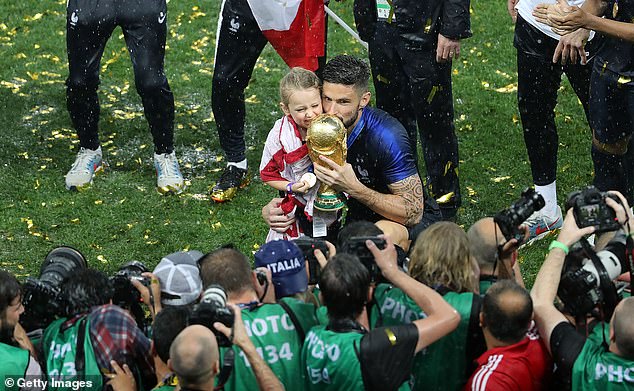 On the morning of the game, he awoke at the team hotel to see a kid holding a banner outside with his name on it. It read: ‘Giroud please get injured.’

‘My relationship with Karim was certainly unique,’ he says. ‘I had to face criticism because I was in his place. There was a section who were up for him and not me. They used to boo me. Against Cameroon I scored and they were still booing me. They resented me because I was there and he wasn’t.

‘It was an injustice but I had to deal with it. It motivated me.’

Benzema is back in Didier Deschamps’ team now and Giroud is on the outside. He has not given up on a recall but is phlegmatic. He laughs that he will receive a Nations League medal – won with the help of a Benzema goal against Spain on Sunday – because he played in the qualifying games. 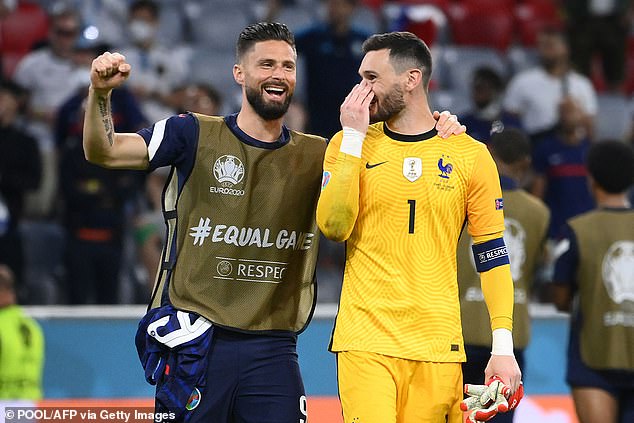 Now on the outside internationally, Giroud has not given up on a recall but is also phlegmatic

And, of course, he has a World Cup winner’s medal. To this day he wishes he could have scored a goal in the finals in Russia – it is one of his few very real regrets – but he has found peace with a stat about which he knows he will always be reminded.

‘I accept now that was the way it had to be for me to become a World Cup winner,’ he says. ‘If you tell me I could have scored six goals in Russia but not win the competition, I would choose the title, obviously.

‘You can fight against things that are said about you but the most important thing is to be aware that you are lucky and happy to be in that team at all.

‘I understand that when you are a striker, people will judge you on your statistics. That’s why I am trying to reach “Titi” Henry’s number, but sometimes things don’t go as you like. And I haven’t given up yet, by the way.’

Giroud grew up in south-east France following the fortunes of Arsenal and AC Milan. Now he has played for both clubs. His hero growing up was the great Milan forward Andriy Shevchenko.

‘I looked up to this club and this amazing shirt so this could be a fantastic end to my career in Europe,’ says Giroud after two Serie A goals already. ‘When you arrive at Milan you feel the weight of history. I have met Sheva many times. I told him he was my hero. He laughed but I got him to sign a shirt and I was the happiest I could be.’

An evangelical Christian, Giroud has at times allowed his faith to guide his career. 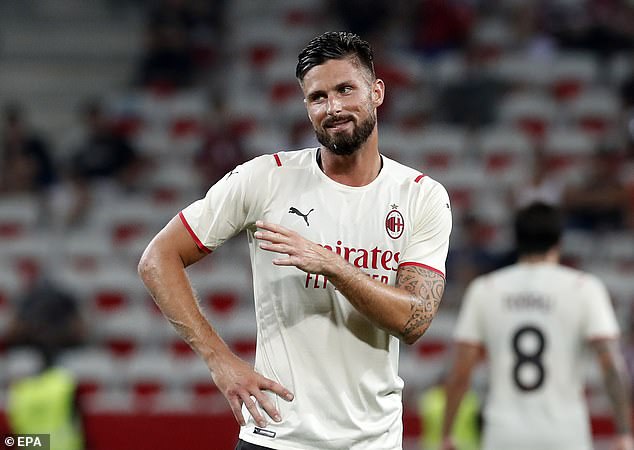 Once, when Everton wanted to sign him from Arsenal in 2017, he said no after receiving advice from a friend of his mother who has – in his own words – the ‘gift of prophecy’.

‘My faith always brought me a lot of strength,’ he says. ‘That’s my motto. We make our own path but the Lord sets the pace.’

Moving forward, he admits he is anxious about what life may be like after football. 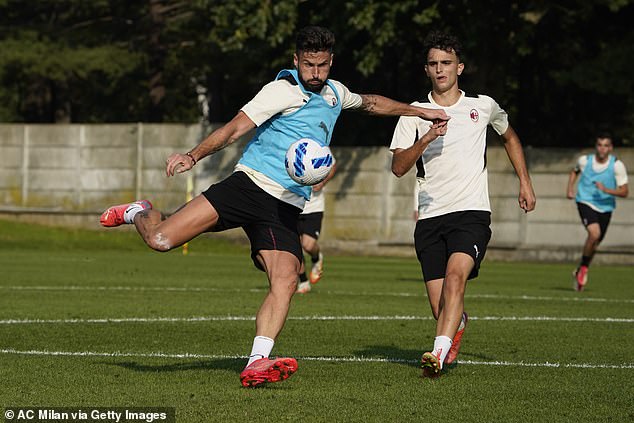 Moving forward, Giroud also admitted he is anxious about what life may be like after football

He does not want to coach – ‘It looks too stressful’ – and will be influenced largely by the needs of his wife Jen and children Jade, Evan and Aaron. But Giroud wants to remain in the game, possibly by mentoring young players or as a sporting director.

‘I have been talking to someone about all this,’ he says. ‘Helping youngsters or helping an academy to find good players. I have something to offer.

‘Nowadays young players have to deal with a different atmosphere around football. You have to be intelligent enough to protect yourself – against criticism, against the problems caused by social media.

‘Image has become important. You have to be careful about what you say and do. You have to show humility. People will not accept any bad things. You need to have a good entourage around you. 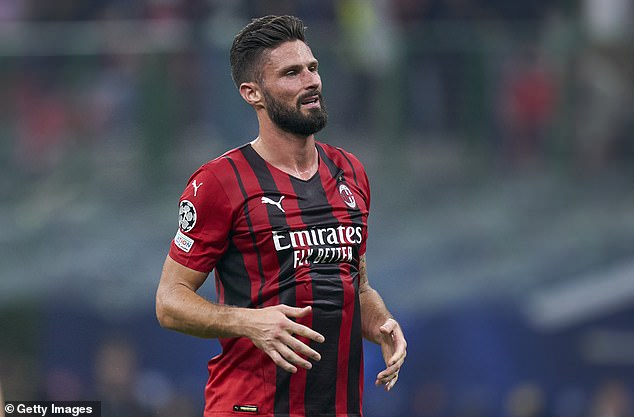 ‘Things happen so quickly in football that if you are not ready to handle the compliments you can get distracted at 20 or 21. It’s harder to be a top player these days because all these things around football make it hard to know how to do the right things.’

By and large, Giroud has found a way through the maze. His c.v. speaks for him and he stresses that his career on the field has some yards to run yet.

Deep down, you sense Arsenal has left the deepest imprint on his heart, but it matters to him that he has never departed any of his clubs under a cloud. 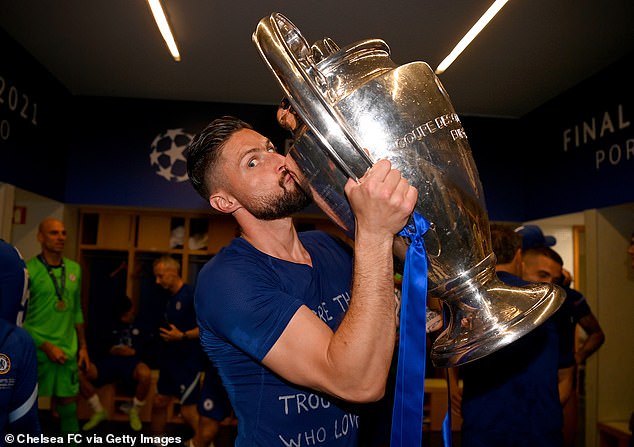 ‘It’s important to leave a good mark on the pitch but also off the pitch,’ he adds.

‘When I meet people in the street, they remember what I have done for Arsenal and Chelsea and that has touched me. That’s the moment you realise what you have achieved in life.’

In France they have been known to call Giroud the ‘Phoenix from Grenoble’ and he still hasn’t gone away. Still rising. Still bouncing. Arsene Wenger’s rubber ball.