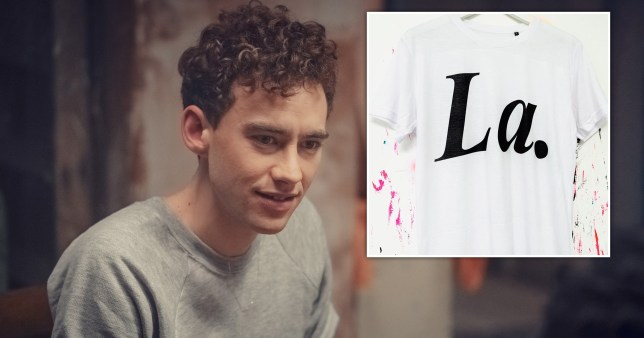 *Warning: This article contains language that some readers may find triggering.

It’s A Sin star Olly Alexander has said he’s ‘extremely disappointed’ after racist and transphobic tweets made by the designer of the La. T-shirts that raised thousands of pounds for charity were uncovered.

Labour councillor Philip Normal has resigned after historic tweets spanning from 2009 to 2014 were reshared online.

One of which read: ‘And I saw the best bad t****y pushing a wheelchair in a gold pleated skirt blowing a whistle really loud! Ultimate Camden town Experience.’

In January 2011 he tweeted that he was dancing like he was at a ‘very t****y wedding reception.’

Philip Normal has resigned from his post as Labour councillor

When asked by one of his followers what ‘t****y’ means, the councillor for Oval Ward, Lambeth, responded: ‘T****Y is our word.’

He added: ‘We’ve used it in London for years.’

That same year, he also wrote a message criticising a ‘big Black man’ for taking up room on a bus, with the hashtag ‘he’s not sucking my d**k’.

T-shirts designed by Normal, inspired by a catchphrase seen in Channel 4’s Aids drama It’s A Sin when the close-knit group of friends in the show would greet each other by saying ‘La’, raised more than £500,000 for HIV and Aids organisation Terrence Higgins Trust in 2021.

Olly, who starred as Richie Tozer, shared Normal’s apology and said he was ‘extremely disappointed’.

Responding to the tweets being shared again on social media, Normal insisted he was ‘horrified and disappointed’ in himself.

‘I am profoundly sorry for the content of some of my historic tweets. I sincerely apologise to everyone who has seen them and who I have insulted by their contents,’ he said.

‘Reading them now I am horrified and deeply disappointed in myself. They are clearly offensive and discriminatory. They do not reflect my views and values today. I have referred myself to the Labour Party for investigation.

‘These messages were written before I was active in the Labour Party. Since being elected as a local Councillor, I have been a dedicated campaigner for equality and against homophobia, transphobia, sexism, racism, Islamophobia or any other form of discrimination.’

‘They conflict entirely with our values and what we stand for as a charity,’ a spokesperson told us.

‘We will always be an ally in the fight against racism, sexism, homophobia, transphobia and other forms of discrimination. This is central to our work as the HIV epidemic and wider sexual health issues are greatly exacerbated by stark inequalities, with marginalised communities some of the most impacted globally.

‘It’s A Sin has had a massive impact in updating people’s perceptions of HIV over the last 12 months. It has engaged so many in the hugely important work still to do to tackle HIV-related stigma, to ensure everyone living with HIV lives well, and to reach the goal of ending new HIV cases by 2030.

‘We’re very grateful for everyone who watched the series, took action and supported our work.  We hope that all that’s been achieved remains the focus when looking at the legacy of the series.’

It’s A Sin is available to stream on All 4.