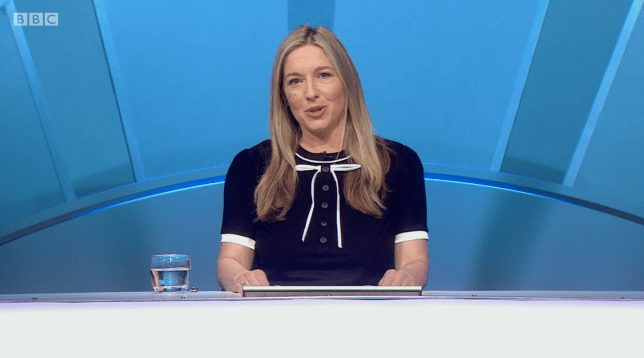 Victoria had a distinctive new marking on her cheek during Monday’s show (Picture: BBC)

Only Connect viewers will have been a little surprised after turning into the latest episode on Monday, with host Victoria Coren Mitchell rocking a new look.

She’s helped the show become one of the most popular programmes on the BBC – even overtaking EastEnders in the ratings recently – but fans have never seen her quite like this before.

As fans will know, the fiendishly difficult quiz has become a certified cult hit since first airing on BBC Four way back in 2008.

After gaining a dedicated audience, it moved to BBC Two in 2014 and it’s not looked back since.

Host Victoria has been asking the questions right from the first episode, and she’s been a mainstay ever since.

But the most recent episode is set to prompt one question from the fans – does she have a tattoo? Here’s what you need to know.

Does Victoria Coren Mitchell have a tattoo?

The series has become a cult hit since first airing in 2008 (Picture: BBC/Parasol/RDF Television/Patrick Olner/Tall and Short Photography)

Victoria, 49, was seen with a flower on her cheek during Monday’s episode, but didn’t explain the reason behind her new look.

She warned viewers by sending out an intriguing tweet ahead of Monday’s episode, informing fans that she would be looking a little different.

The presenter informed viewers that she had a temporary tattoo when the episode was recorded.

Writing on the social media site, she wrote: ‘On tonight’s Only Connect: no, it isn’t a bruise. It’s a LOVELY GLITTERY FLOWER TATTOO.’

She jokingly added: ‘If I was going to get a permanent tattoo, I’d have a naval battle on my back. And a land battle on my navel.’

On tonight’s Only Connect: no, it isn’t a bruise. It’s a LOVELY GLITTERY FLOWER TATTOO.

If I was going to get a permanent tattoo, I’d have a naval battle on my back.

And a land battle on my navel.@BBCTwo 8pm.

While Victoria didn’t explain why the temporary tattoo, she did clear up that it wasn’t related to her stint on Channel 4 show Taskmaster.

‘Or is it a 6 month long task set by the devious @AlexHorne?’ one fan wrote.

Only Connect airs on Mondays at 8pm on BBC Two.

MORE : How does Only Connect work as the Victoria Coren Mitchell quiz show returns?