Zoey Deutch proved to be very busy with outfit changes as production on her new Hulu film Not Okay kicked off in NYC on Friday.

The 26-year-old actress brought lots of an enthusiasm to set as she slipped into four different looks to portray a fame-hungry millennial.

The Before I Fall star was glimpsed in character as Danni Sanders, a misguided woman so thirsty for friends and fame that she fakes a trip to Paris before things quickly go awry.

Attention hungry: Zoey Deutch, 26, slipped into not one but four different outfits for her first day on the set of her new Hulu film Not Okay which begun shooting in NYC on Friday

Zoey was seen with two-toned blonde and brown hair on the set of the Quinn Shephard directed film.

And though it was only day one the quirky actress seemed to be settling into her character quite nicely as she embodied the essence of an attention-seeking young woman.

Her first look included a multi-colored plaid mini skirt which she donned with a white cap sleeve shirt that was unbuttoned to show her midriff, and pink platform shoes. 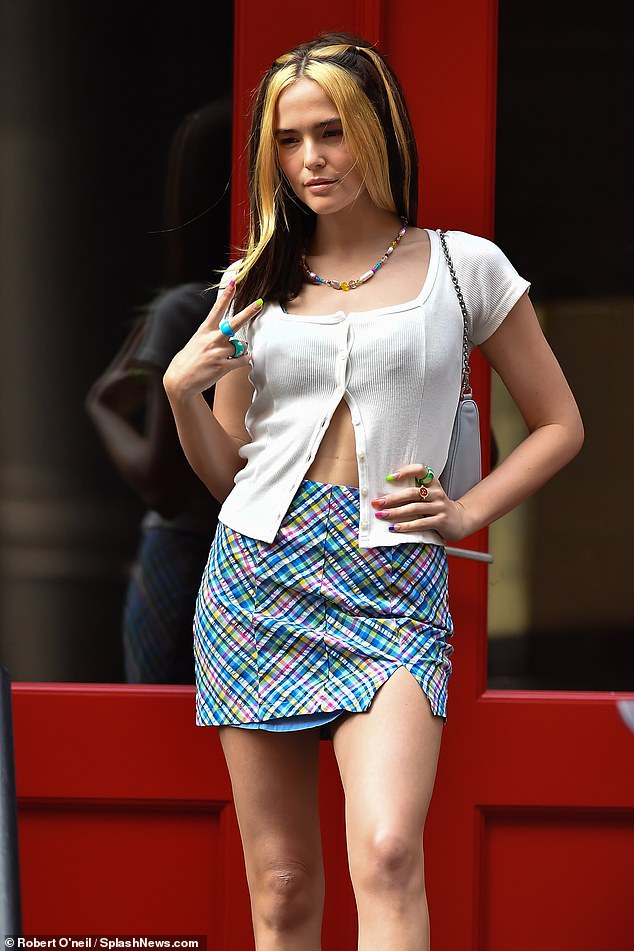 Attitude: The Before I Fall actress looked very colorful and flashed a peace sign in one scene

Leggy: The first look consisted of a multi-colored mini skirt with a white unbuttoned shirt that exposed her midriff 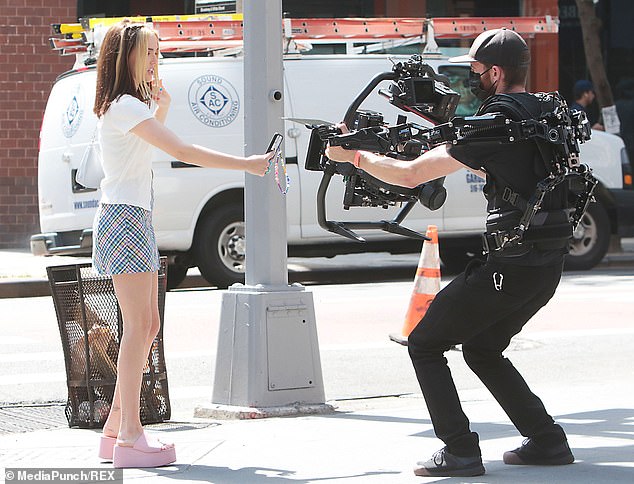 Vanity: Zoey showed off two-toned hair and snapped some selfies while portraying an attention seeking youth

Deutch was seen as her character snapping selfies and feigning enthusiasm for the camera in one scene before she seemed to ramp up the thirst.

A second outfit included flared denim jeans and an argyle printed T-shirt as she twisted and twirled for the camera.

Really playing up the ‘Paris’ facade, she was spotted wearing a red beret and crouching next to some shopping bags. 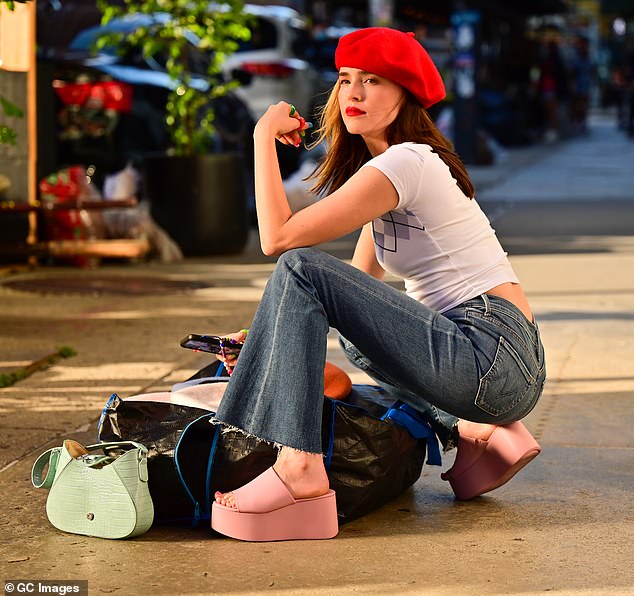 Bonjour: At one point her character Danni is seen slipping on a red beret to keep up the Paris facade

Jumping for joy: At one point she twirled around the streets in flared denim jeans with a big grin plastered on her face 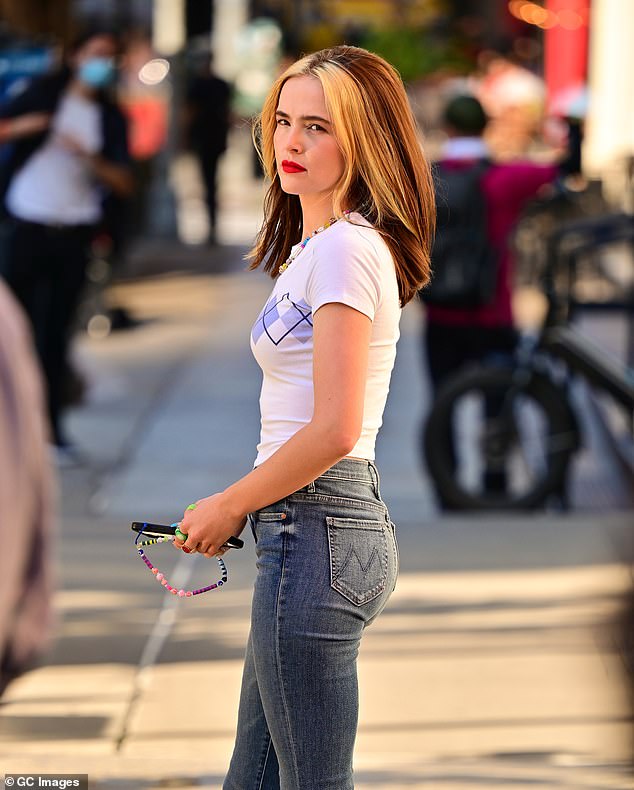 Serving looks: She flashed a bit of attitude and a red lip while shooting bright and early in the city 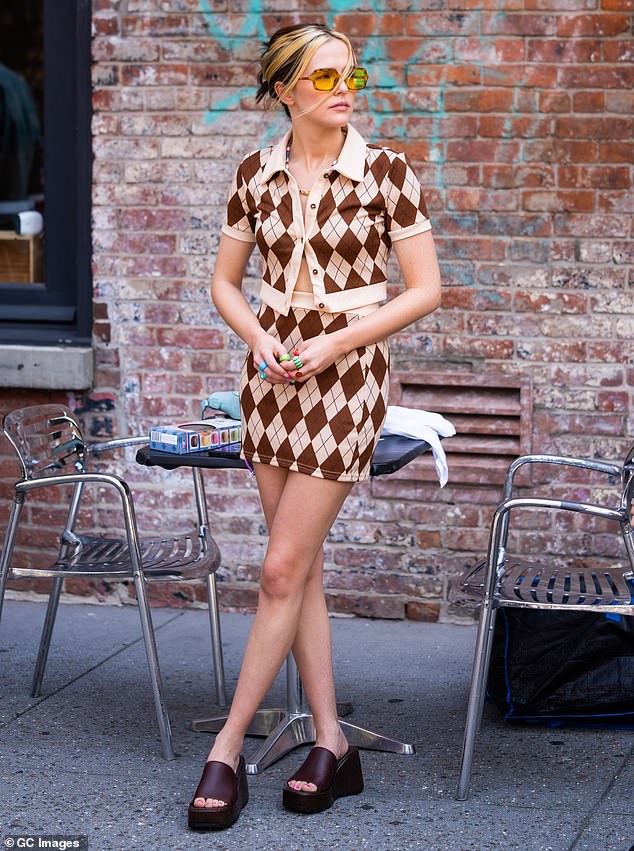 Leggy: The Flower actress showed off her slim legs in another mini skirt look

A third look included a very mod brown argyle skirt set with dark brown platforms, at which point she clipped her hair back and wore sunglasses.

Continuing to ramp up the French fantasy she was seen snapping photos with a croissant on her forehead.

And embodying an Instagram-centric food culture she was then seen expertly curating a meal shot by standing on her chair. 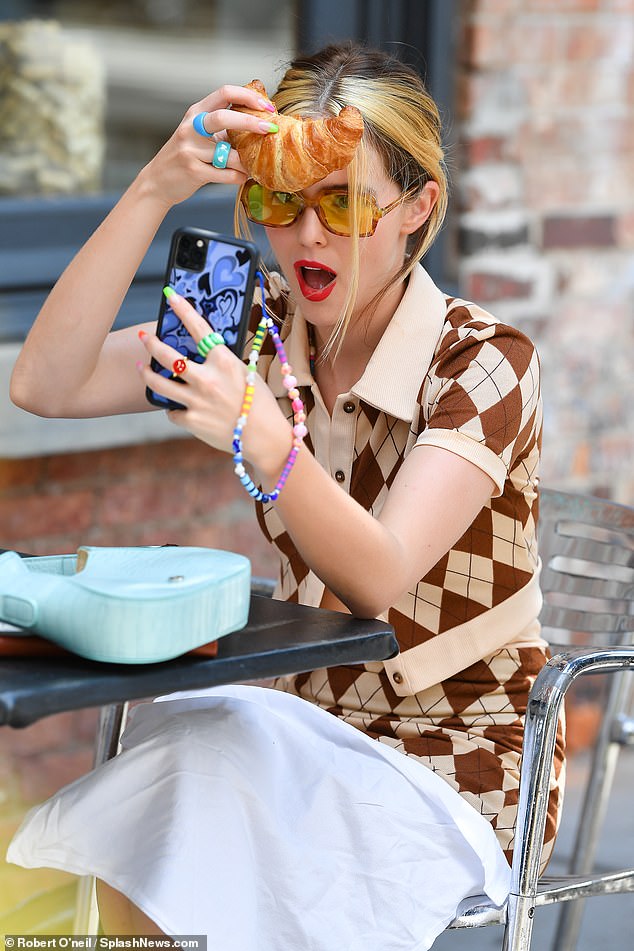 Croissant to the face: Zoey continued to ramp up the French fantasy with a classic pastry which she playfully put at her forehead 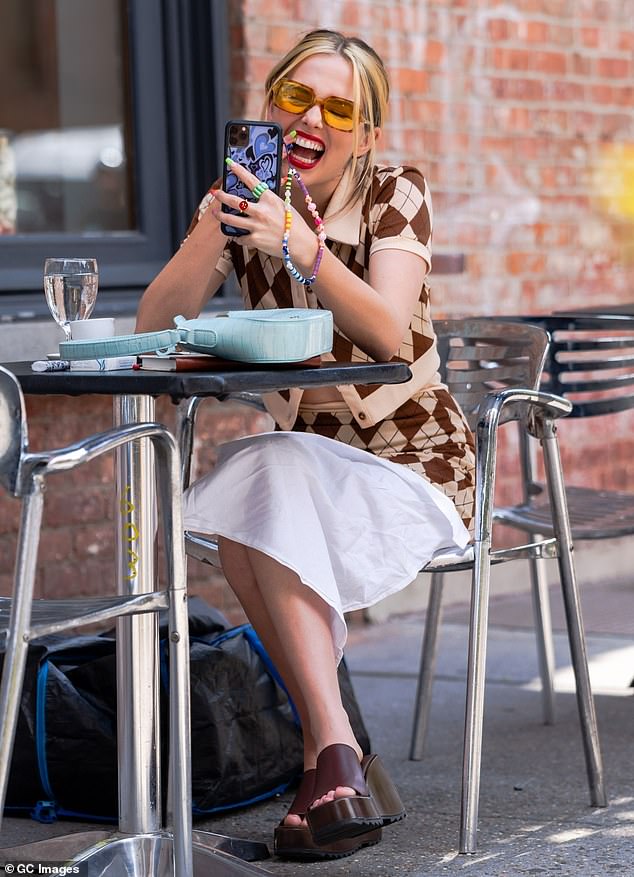 Cafe: Trying to fake being at a Parisian cafe she framed the shot just right 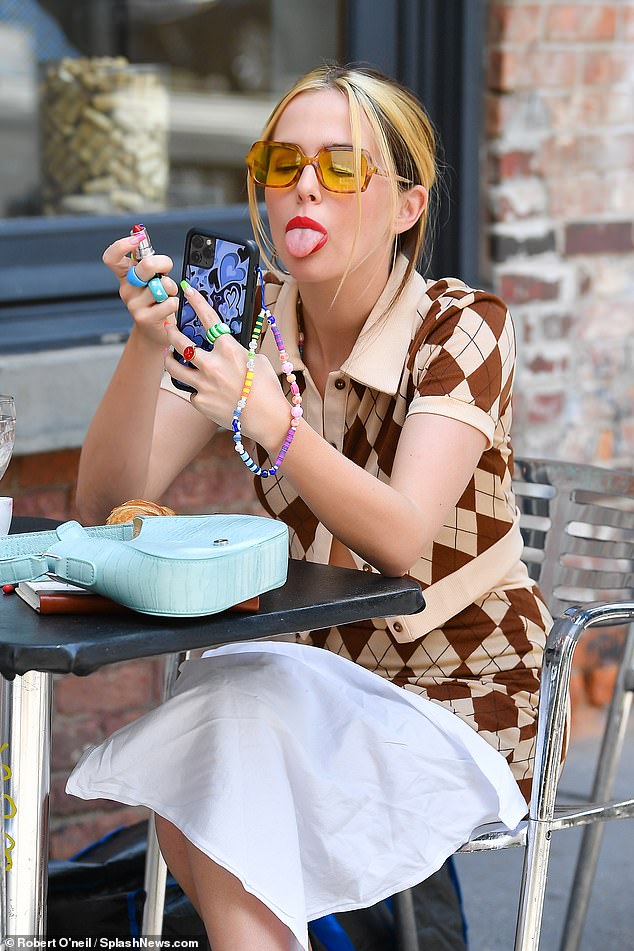 Goofing off: She was seen clutching red lipstick which she touched up in the scene 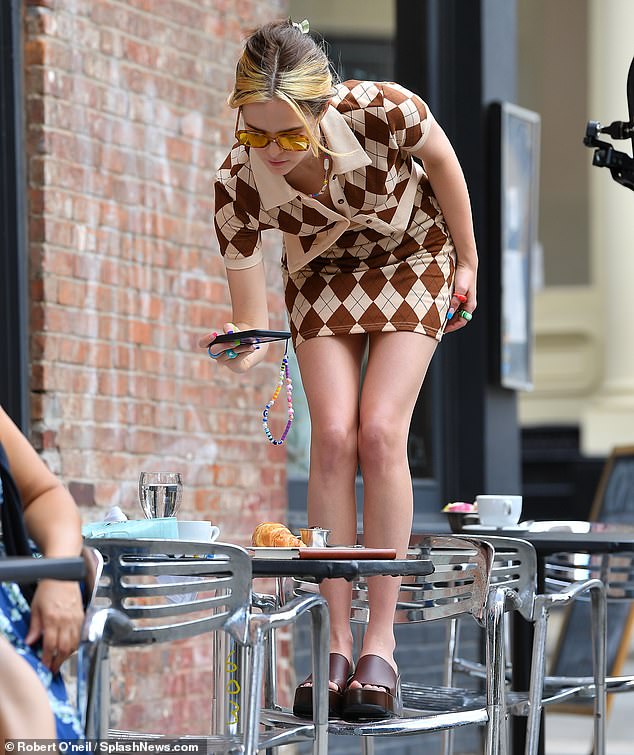 Influencers in the wild! Her character boldly stood on her chair to get the perfect above shot of her meal

A fourth look was much more laid back than the fashionable looks as Zoey stocked up provisions in a grocery store scene while wearing a black hoodie and grey sweatpants with orange Ugg slippers.

A Deadline description of the film teases that during the course of her imaginary Parisian vacation something goes very awry.

‘When a terrifying incident takes place in the real world and becomes part of her imaginary trip, her white lie becomes a moral quandary that offers her all the attention she’s wanted,’ the description reads.

Zoey shared snaps from her first day on set as she posted some artful Instagrams that read ‘day one of not okay’ interspersed across slides. 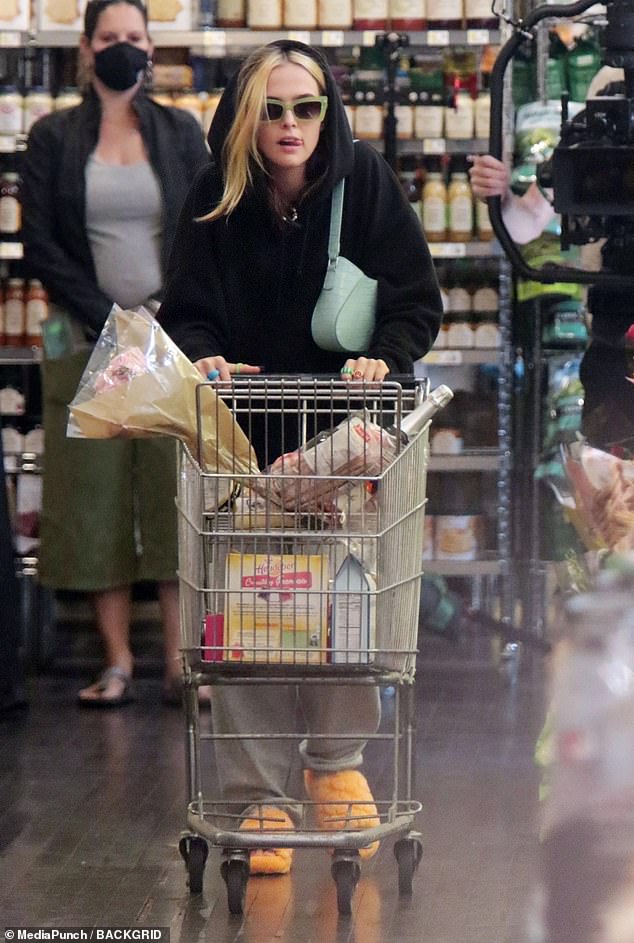 Shopping trip: She was seen picking up some provisions in a grocery store scene 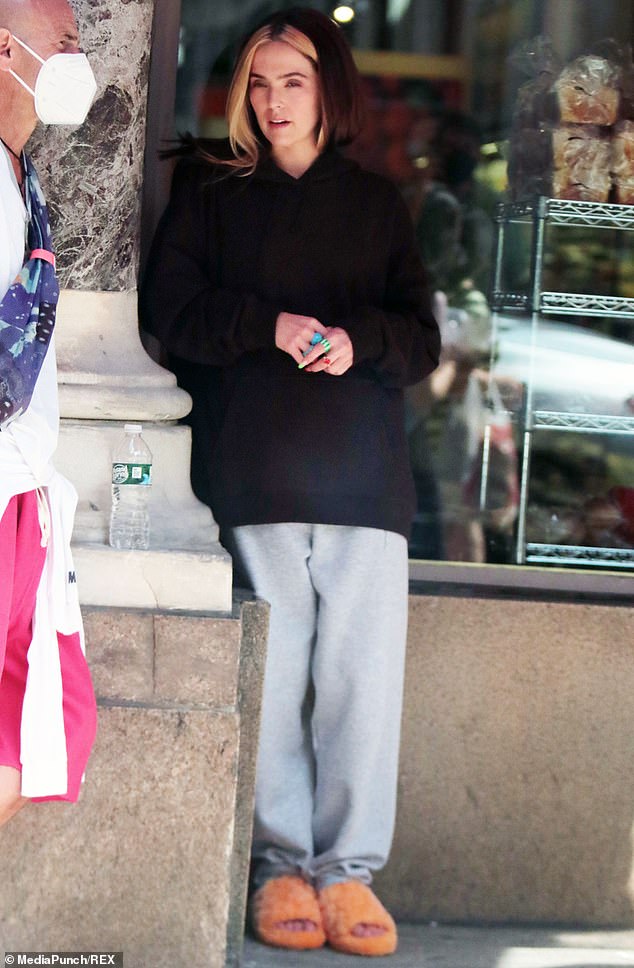 Taking a breather: In between takes she looked cozy in her wardrobe as she stood outside of an establishment 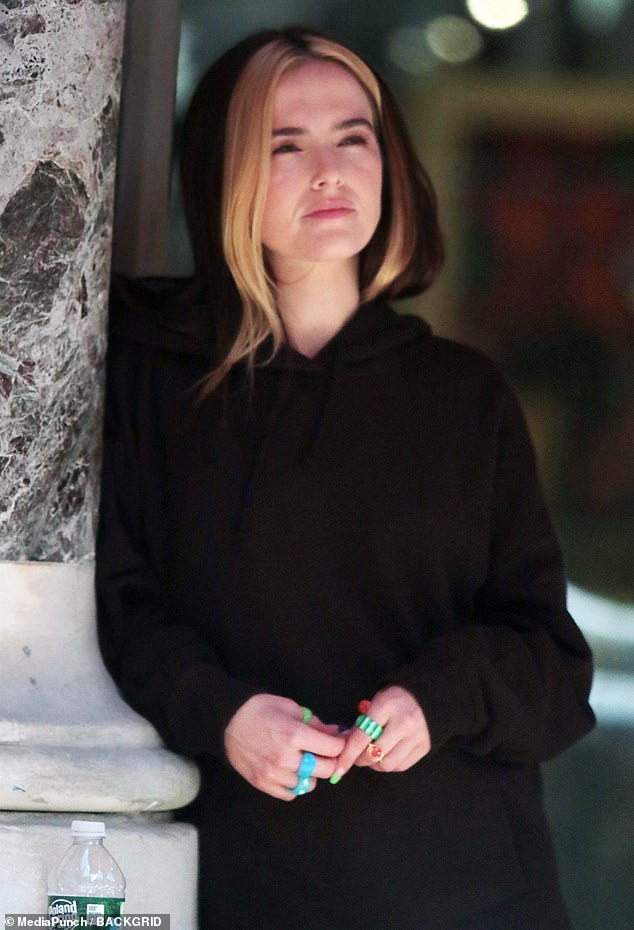 Downward spiral: A Deadline description of the film, teases that during the course of her imaginary Parisian vacation something goes very awry 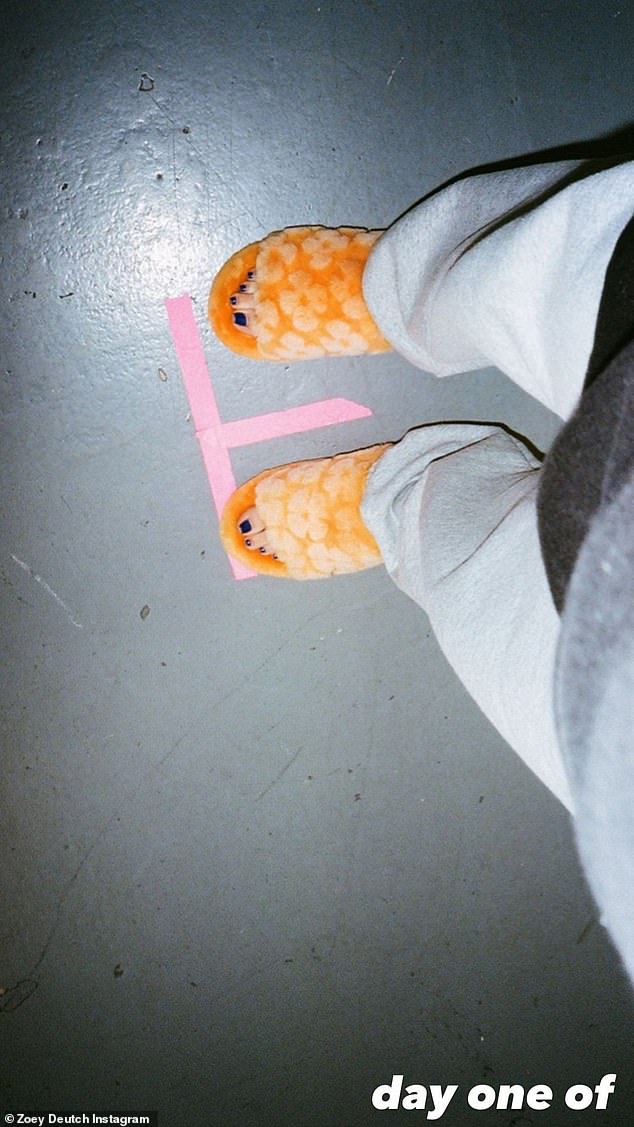 Day one: The Buffaloed actress shared behind the scenes snaps 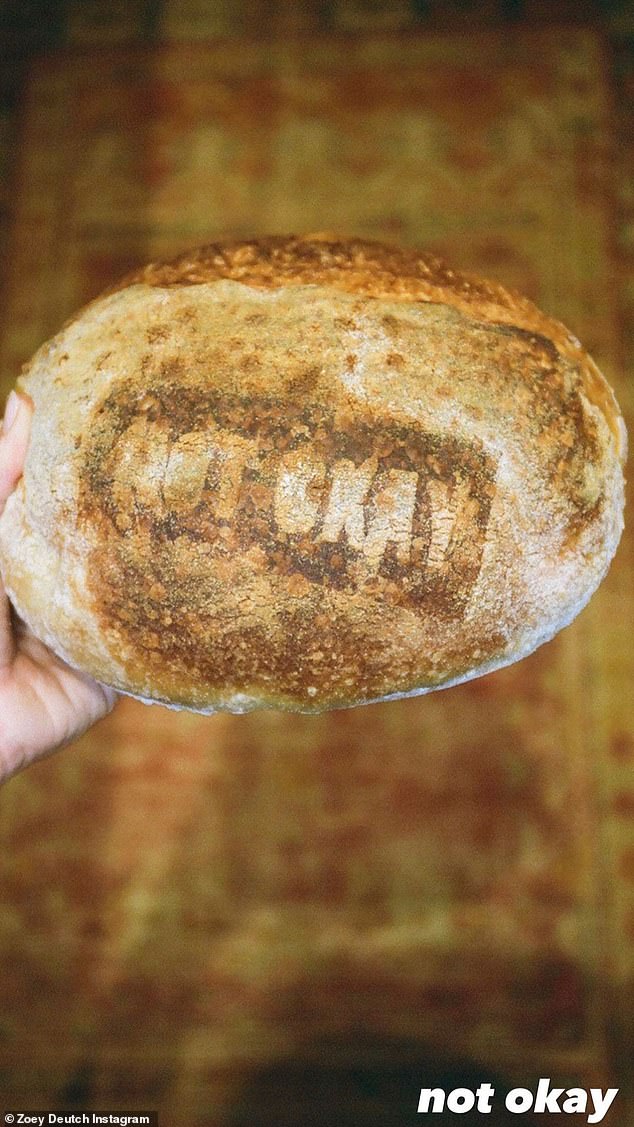 Custom: A snap showed off a loaf of bread with the film’s title imprinted in it

One shot included her getting hair and makeup, while another was a shot of her feet in the orange slippers next to a blocking marker, and a third showed off custom bread branded with the movie’s title.

Though no release date for the film has been set it will stream exclusively on Hulu and her casting was only revealed last month.

The Buffaloed starlette has been seen spending time between NYC and Los Angeles with her boyfriend, American Vandal actor Jimmy Tatro.

The pair only confirmed their romance this past Valentine’s Day as he posted loved up snaps with the caption: ‘Just using today as an excuse to post some top-notch untapped Zoey content.’ 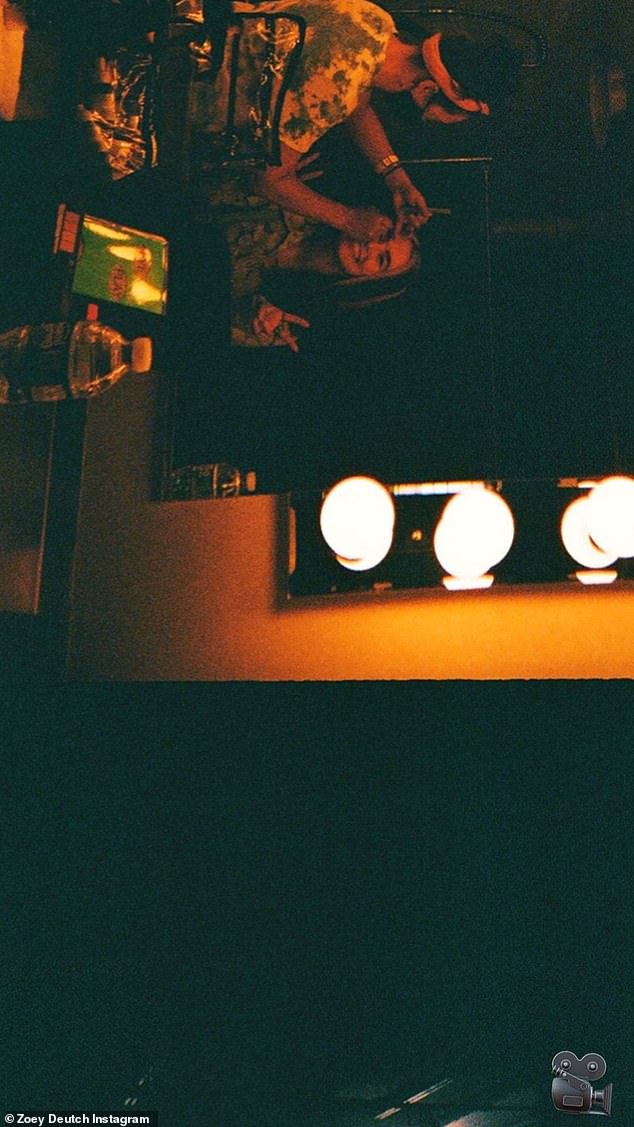 Hair and makeup: Another snap showed her getting glammed up ahead of shooting

Details: Her looks were full of very trendy accessories which included an influencer-centric phone charm and bright colored rings with acrylic nails