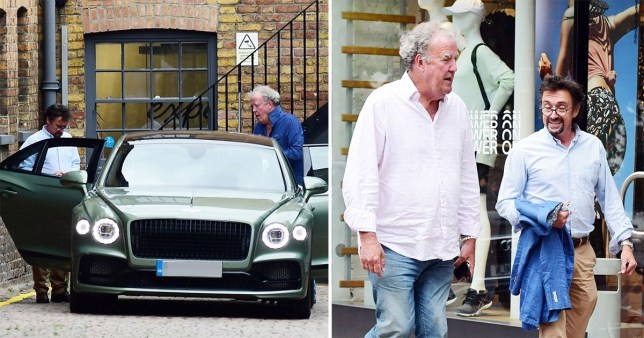 The Grand Tour stars Jeremy Clarkson and Richard Hammond had an afternoon out in Notting Hill (Picture: Backgrid)

Jeremy Clarkson and Richard Hammond spent a sunny afternoon together in London as they were spotted having a good old chinwag at the pub.

The Grand Tour stars visited a watering hole in Notting Hill at the weekend for a catch up over a drink.

The TV stars looked chilled out with a bottle of wine between them at a table in the window with Richard filling him in on the latest in an animate conversation.

Drinks downed the pair left the pub and took a short stroll in the sunshine to a waiting green Bentley, ready to take them to their next destination.

Jeremy stopped to briefly have a wardrobe change, from a pale pink shirt to a dark blue one, before they were whisked away.

The duo are set to appear alongside James May a special double-bill that was filmed in Scotland between lockdowns in 2020, which will land on Amazon Prime Video on July 30.

The presenters enjoyed a bottle of wine at a pub (Picture: Backgrid)

The pair had a short stroll through Notting Hill (Picture: Backgrid)

Confined to the UK because of the pandemic, the trio will celebrate the great 70s American cars they saw in TV shows as kids, with the usual mayhem and bickering along the way.

With travel still up in the air, maybe Jeremy and Richard were planning another UK-based jaunt?

The Who Wants To Be A Millionaire? host might have some more time to fit in another Grand Tour journey as his Amazon Prime Video series Clarkson’s Farm is apparently yet to be renewed for a second series.

Jeremy briefly changed his shirt before they got into a fancy green car (Picture: Backgrid)

The show has been a huge success, with Jeremy admitting his shock over the positive reaction – but it looks like it won’t be back any time soon.

When asked by a Twitter user if the show would return for more episodes, Jeremy wrote: ‘No. We aren’t. Write to Amazon, it’s their decision.’

No. We arenât. Write to Amazon, itâs their decision.

Clarkson’s Farm follows the presenter as he runs his 1,000 acre farm in the Cotswolds.

Richard meanwhile has his own solo project in the pipeline, opening a workshop doing up classic cars, with the cameras following his progress for Discovery Plus.