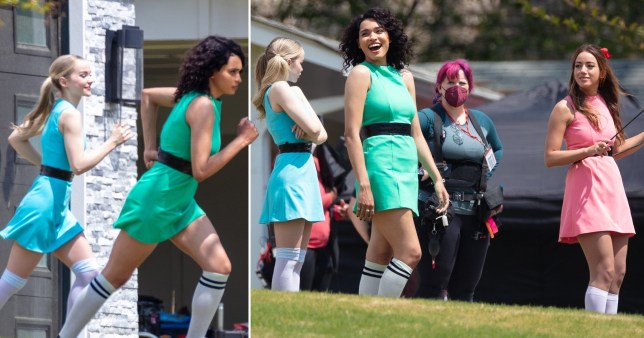 The stars of the Powerpuff Girls live action series were on set filming some daring flight scenes as work on the ‘gritty’ reboot continues.

Stars Chloe Bennet, Yana Perrault and Dove Cameron were spotted in Atlanta acting out some action shots while attached to wires.

They were joined on location by their co-stars Robin Lively and Donald Faison, who will be playing Professor Drake Utonium.

Chloe, playing Powerpuff Girl Blossom, was seen getting ready to take off and save the day as she readied herself to spring into action. She was later in the air, looking calm as she was maneouvered by the crew around a residential street.

She was joined by her co-stars Yana, playing Buttercup, and Dove who is playing Bubbles, and they watched on as Chloe took flight.

Extra steps were taken on set to make sure filming was Covid safe, with all the members of the crew wearing face masks.

Filming on the reboot got underway in Atlanta (Picture: Backgrid)

The new pictures also give fans their first good look at the Powerpuff Girls’ outfits for the first time.

They have obviously tried to stay as true to the beloved cartoon as possible with Blossom, Bubbles and Buttercup each wearing their trademark red, blue and green colours.

They were all wearing white knee-high socks and black shoes with a black belt around their dresses.

Chloe and Dove had their hair styled to match their cartoon counterparts while Yana was given shoulder-length curly hair.

The three stars seem to be getting on famously as they chatted and laughed together in between takes.

The original Powerpuff Girls (and their outfits) (Picture: Cartoon Network)

The Scrubs actor was stood on the lawn of Professor Utonium’s home in Townsville, where he created his three daughters out of sugar, spice, everything nice and of course, Chemical X, which gave them their super powers.

Fans of the original Cartoon Network series are going to be in for a surprise, as this version as been described as a ‘gritty’ take on the show.

From Juno creator Diablo Cody, it will see us catch up with the trio in their twenties as they adjust to life as adults after being forced to be superheroes by their dad.

MORE : Game Of Thrones season 8 has a new trailer two years after car crash finale – and it hasn’t gone down well with fans…