Ajax have been left red-faced after UEFA rejected their desperate request to register Sebastien Haller in their Europa League squad after an initial administrative error.

It was announced on Thursday that the Dutch giants had forgot to include their £20million January signing in their squad for the tournament’s knockout stages which begin later this month with Ajax facing French outfit Lille in the last 32.

All clubs had until Tuesday, February 2 to submit their Europa League squads but Ajax inexplicably forgot to name Haller. 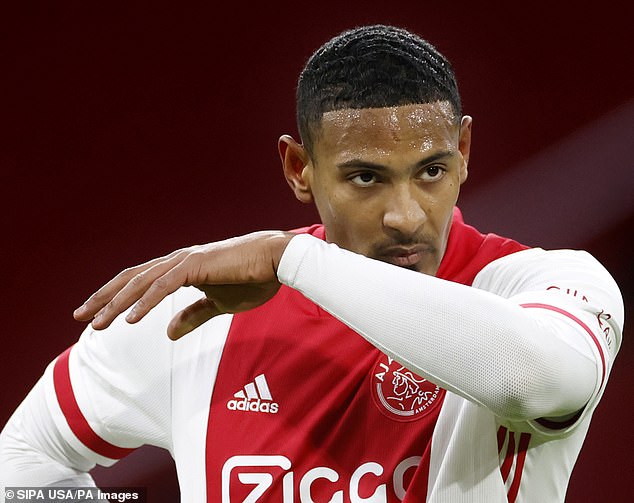 Upon realising their mistake the Amsterdam outfit contacted UEFA to rectify it but to no avail.

‘UEFA has informed Ajax that winter purchase Sébastien Haller will definitely not be available in the UEFA Europa League for the rest of the 2020-21 season,’ a short statement on the club’s wesbite read on Friday morning.

‘Due to an administrative error at Ajax, the striker was not registered on the list of players for the Europa League, which had to be submitted no later than Tuesday 2 February. The player who came to Ajax from West Ham United on January 8, can be used in premier league and cup matches.

‘Despite attempts to get Haller eligible to play, the club received a final message from UEFA on Thursday evening that Haller will not be added after all. Oussama Idrissi, the other attacker who came to Ajax in the last transfer window, can be used in the Europa League.’

Ajax swooped for Haller in a £20m move from West Ham in the January transfer window – 18 months after the Hammers splashed out £45m on the striker.

The 26-year-old has hit the ground running in Holland, firing in two goals in his first six games.

He signed a four-and-a-half-year deal upon joining Ajax, with West Ham accepting a bid that was half of what they paid for him in July 2019.

It appears the chance to play in Europe was a big attraction for Haller, who said upon his arrival: ‘This is a club where I can compete in the Champions League and chase titles every season and it’s that winning mentality that suits me.’