Pep Guardiola has leapt to the defence of Sergio Aguero after the Manchester City striker escaped punishment for grabbing assistant referee Sian Massey-Ellis during their 1-0 win over Arsenal.

The Argentine forward was disputing a throw-in decision which went against him during the game.

He spoke to Massey-Ellis as she pointed her flag in favour of Arsenal, before briefly grabbing her shoulder as she walked up the touchline.

Replays showed the ball coming off Aguero and some believe he was fortunate not to receive a red card for the incident.

The incident was raised in Guardiola’s post-match press conference with the Spaniard not convinced Aguero did anything wrong.

‘Come on guys. Sergio is the nicest person I have ever met in my life,’ he said. ‘Look for problems in other situations, not in this one.’

New rules were introduced in 2016 in order to protect referee’s which stated that players could receive yellow or red cards for touching any of the officials.

It stated that any physical contact with a referee would warrant a yellow or red card which would be judged on the level of severity.

Guardiola leapt to Aguero’s defence, claiming the Argentine is the ‘nicest person’ he’s ever met

A statement on the Premier League website in 2016 said: ‘Premier League football, and the wider game in England, is known for being competitive and compelling, but also for its fairness and for being played in the right spirit.

‘However, the English football authorities have noticed over the past four seasons that intolerable behaviour by players and managers in their competitions have reached unacceptable levels in certain areas.

‘This will focus on behaviour towards match officials, with the aim of reducing disrespectful conduct such as aggressively challenging decisions or running from distance to confront an official.’ 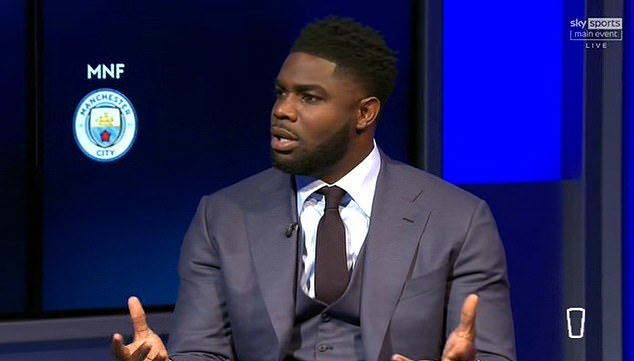 He said: ‘He didn’t need to do it really. You have to respect the officials. I think she deals with the situation really well.

‘He’ll know better. I don’t think we need to go over the top on it but he shouldn’t be touching the officials, it doesn’t look good.’

The incident came towards the end of the first half, with City going into the break a goal to the good.

The deadlock was broken by Raheem Sterling, who’s left-footed finish found the corner of the net.

Arsenal felt as though they should have got a penalty for Kyle Walker’s high boot as Gabriel Magalhaes went for a header, but City would hold on for the victory.