The atmosphere at Bramall Lane will be supercharged when Sheffield United and Nottingham Forest run out to do battle in the first leg of their Championship semi-final play-off this weekend.

Not only are the Premier League ambitions of two historic clubs and a promotion dividend of more than £100million on the line, but matches between the Blades and the Reds reverberate with almost 100 years of history.

Last time the two sides met at this stage of the play-offs was 19 years ago. United battled back from two goals down in the second leg, to snatch a 4-3 win in extra time on a crazy, raucous night in Sheffield, in 2003. 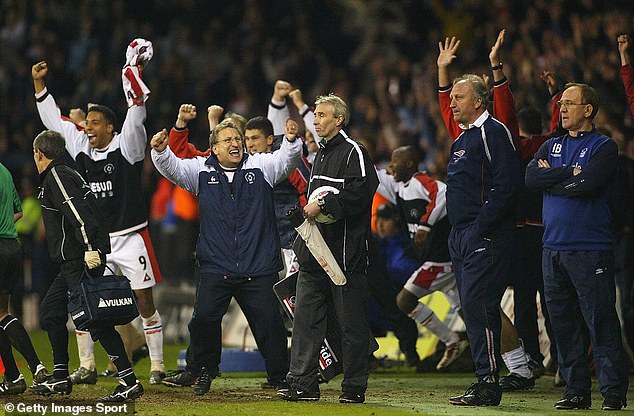 ‘When I look back now, it was one of the best atmospheres I ever played in,’ the Blades goalkeeper, Paddy Kenny, told Sportsmail as he reflected on the 5-4 aggregate win, masterminded by Neil Warnock.

Michael Brown, who scored United’s first goal told the BBC he loved the fixture during his four years with the club and was looking forward to this game.

‘It has a history and a bit of spice to it,’ recalled Brown. Saturday’s encounter will be no different. 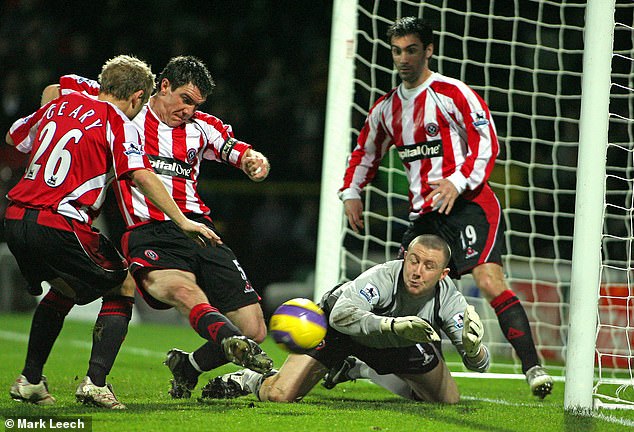 Sheffield and Nottingham have an unusual and lesser-known rivalry in British football, but it is no less visceral for that.

It is not born of local competition, since 32 miles of the M1 separate the two cities. There is no religious legacy, like Rangers and Celtic, or class war. This is an enmity that can be traced to a national coal mining dispute in the 1920s and is still rooted in the hostility of the 1984 miners’ strike. It lives on in the memory of older fans – and in folklore for the rest.

In both strikes, Notts miners took their own path and elected to work, while Yorkshire and the rest of the country downed tools with deep-seated resentment towards the East Midlands’ men.

As a result, perhaps victory is always a little sweeter in this fixture, which still echoes the divisions of the past in the Blades’ chants of ‘Scab, scab, scab!’ and ‘Who let the miners down?’ Swiftly followed by, ‘You did? You did!’ 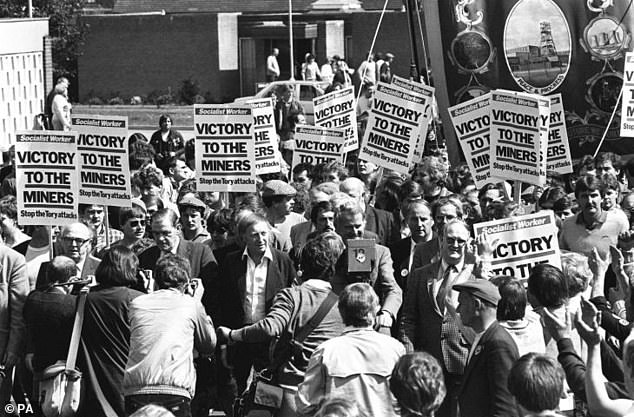 Mineworkers in Nottinghamshire voted to carry on working, splitting the local workforce

Imagine that been us scoring the goal against the scabs then going up.
Absolute pandemonium and probably WW3 near the Forest end.

I always check for Forest’s results. But there’s bad blood between us. ( Like the time I advised the boys it wasn’t a good idea to go in the TBI before the match, but, they didn’t believe me, and we got trapped there, amidst a fight started by a Blade calling the Reds ‘scabs..’ )

‘Actually, I am not sure if they are referring to the 1984-85 miners’ strike or the 1926 miners’ strike, because the enmity goes far back,’ joked Amanda Ball, a principal lecturer in journalism and public affairs at Nottingham Trent University, and a lifelong Blades’ fan.

‘There is more of an edge, if it is Forest,’ added Ball, who admits it will mean a little more beating their Nottingham rivals, compared to the other play-off contenders, Huddersfield Town and Luton.

‘But it is not just Sheffield United,’ she explained. ‘It is the same chants when any of the Yorkshire teams play Forest.’

The 1984 strike was a violent and bitter year-long dispute which saw coal miners across the UK walkout after the National Coal Board announced its intention to close 20 pits, which would cost 20,000 jobs.

The strike, which involved more than 200,000 miners nationwide, began at the Cortonwood colliery, near Rotherham, in South Yorkshire and pitched Conservative Prime Minister Margaret Thatcher against the trade unions.

Within days, the vast majority of men in almost every coalmining county responded to the strike call, but ultimately the Nottinghamshire coalfield kept working. 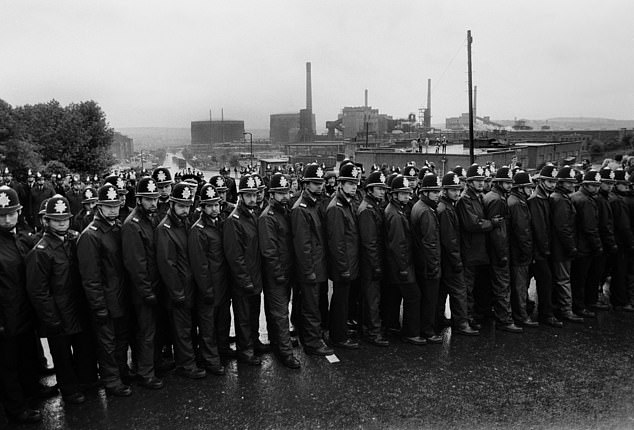 Police were deployed to areas of confrontation across the country, including the Orgreave Coking plant (pictured). During the course of the strike there were more arrests in Notts than in any other county

Men from the South Yorkshire branches of the National Union of Mineworkers, under the direction of NUM president Arthur Scargill, were sent to Nottinghamshire to fiercely picket the mine entrances.

South Yorkshire was militant with almost 100 per cent of miners out, but in Notts only 20 per cent supported the strike.

Since the government’s strategy to break the strike was to stockpile coal and keep some mines in production, Nottinghamshire miners were blamed for the capitulation and hardships that followed. 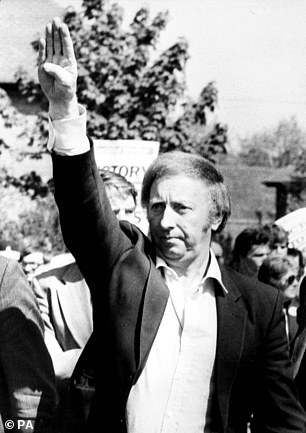 Battle lines were drawn and the injustices – real and perceived – have never been forgotten and often not forgiven by those who lived through those desperate times.

People on both sides suffered and for many years afterwards, as the industry, already in decline, eventually collapsed.

Of course, a lot of fans are too young to remember those days, but the seismic political and social event sent shockwaves across generations. And some sense of grievance has survived in the tribal nature of football fandom, passed on from one group to the next.

‘[Many fans] will know of these things that happened way back in the mists of time,’ said Ball. ‘It is like folklore; it is passed on through generations.

‘I started taking my nephew to Bramall Lane when he was about 12,’ Ball added. ‘We sat in the family stand. The first time we played Forest he said to me, “why are they shouting ‘scab’?” So, I had to explain to him.’

Although, there may be some evidence that the historical hostility is beginning to wane, almost 40 years on.

‘The League of Love and Hate’, a fan survey, reported in Sportbible, that charts the shifting sands of fan rivalries, listed the Blades’ fiercest rivals as Sheffield Wednesday and Leeds United in 2019, followed by local teams, Barnsley, Rotherham United and Doncaster Rovers. 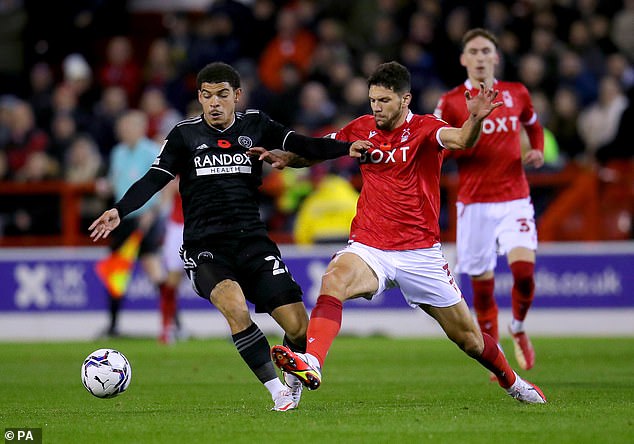 Forest and Sheffield United’s rivalry is rooted in political and social history and games are still fiercely contested. This season, both Championship matches ended in 1-1- draws

‘I’ve always had Nottingham Forest in our ‘top 5′ and would pick Forest over Rotherham and exclude Doncaster altogether, just because teams are close doesn’t mean they’re a rival,’ Whitsun Blade commented on the S24SU fan site.

‘There’s obviously historical rivalries but younger fans may not know about or feel that rivalry,’ added another user, Sheffsteel.

‘Then there are fashion trends where a set of results, or a set of events temporarily grows that rivalry to something very strong.’

Wherever Forest now sit on the Richter scale of rivalry, last weekend, Blades’ fans were glued to their phones, even as they thrashed champions Fulham 4-0 to seal their own play-off place. 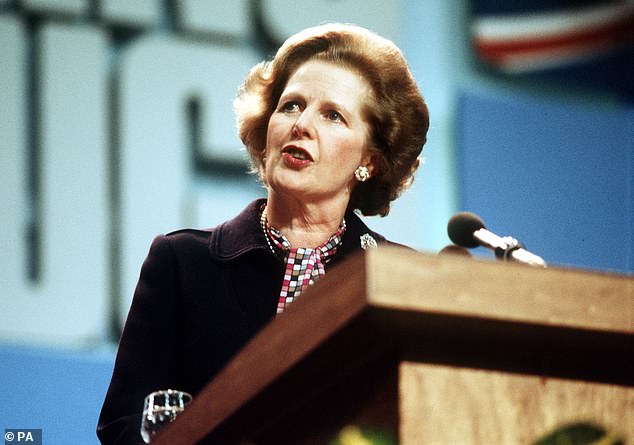 They wanted to know how Forest were faring at Hull City. And then an equaliser for the Tigers in the 94th minute set up this mouth-watering tie.

On the Nottinghamshire side of the divide, Forest fans still rank Sheffield United as one of their most significant rivals, behind Derby County and Leicester City, in fan surveys.

Their dislikes are very neatly reflected in the Reds own chant: ‘We hate Derby County, we hate Leicester too, we hate Sheffield United… Forest we love you’.

‘It is a quirk of football… the folklore of the game,’ reflected Paul Severn, 41, one of the organisers of the Nottingham Forest Supporters’ Trust, who points out he would have been four-years-old at the time of the dispute.

‘They will be calling us Scabs for a change. YAWN,’ predicted Forest fan, Andrew McGuinn, probably correctly, on his Twitter account after the result at the MKM Stadium (formerly the KC). ‘The majority of them weren’t born when the strike was on.’ 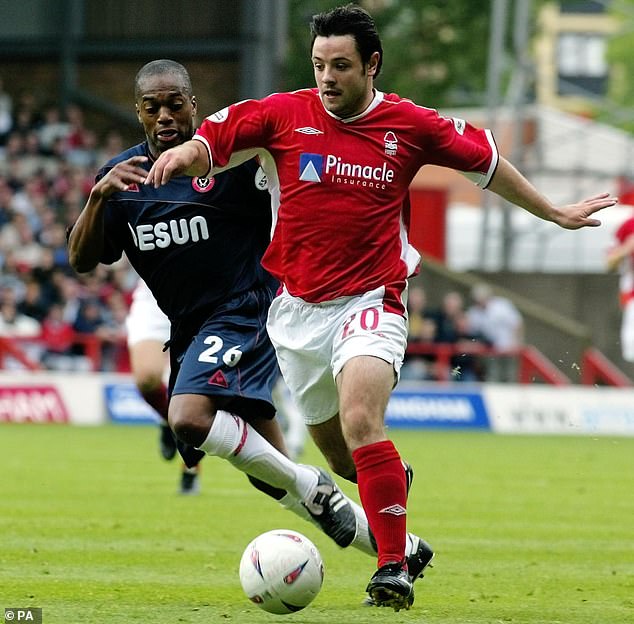 They will be calling us Scabs for a change. YAWN. The majority of them weren’t born when the strike was on. Lol

I will be at Beautiful Downtown Bramall Lane on Saturday. We will sing that Forest are Scabs, they will reply with the sign on song……banter, football banter⚔️ Mick the Blade

Forest fans could claim they have been treated unfairly in this dispute for almost four decades.

In some accounts of the miners’ strike, the Notts workforce were prepared to cross the lines when they were manned by flying pickets from Wales.

But when the Yorkshire miners pitched up, with a more aggressive attitude, not to mention a bit of previous in earlier strikes, they refused to be bullied, and the Notts’ men went back to work.

But regardless of what was going on in the industrial dispute, their own club actually supported the miners in 1984.

In his autobiography, former Labour cabinet minister, Peter Hain, recalled how Forest’s then manager, the legendary Brian Clough, backed the striking miners with his own cash. Hain set up the Miners’ Families Christmas Appeal to aid stricken families in December 1984. 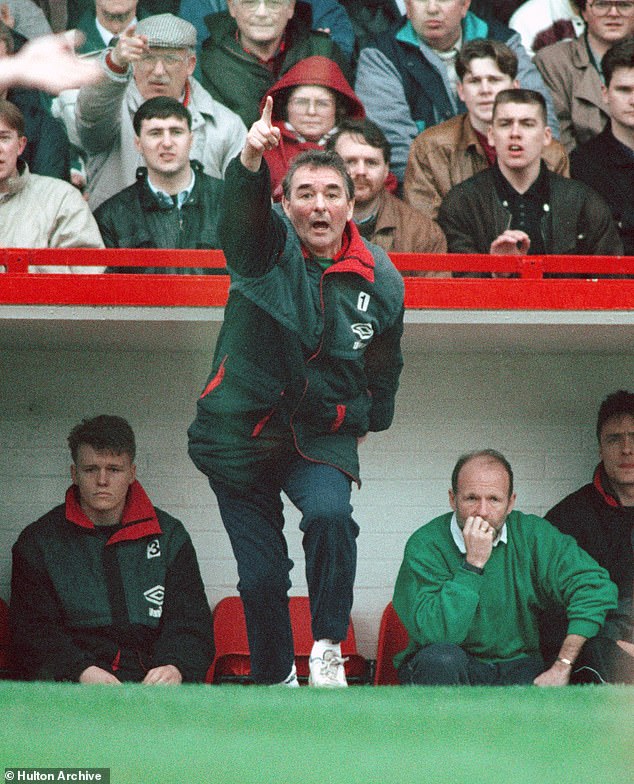 ‘Since he was coach to Nottingham Forest and the Nottinghamshire miners had split from their union to work on through the strike, his support was very significant and I waved his cheque at our launch press conference.’

In fact, Clough had a history of supporting miners that stretched back more than a decade. In a previous strike in 1972, he took his Derby County squad to man the picket lines at a colliery in Spondon, Derbyshire, over two days.

In the eighties, he joined marches and as ever, stories are legion of his colourful interventions.

In one, striking miners were collecting donations in the vicinity of the City Ground, when they were invited to a Forest board meeting by Clough, to put their case.

‘At the end, he gave them a substantial personal cheque,’ a correspondent to The Guardian wrote in 2009, 25 years after the dispute. ‘The following Saturday they all returned to the ground to help clear snow from the pitch to enable that day’s game to go ahead.’

But details never got in the way of a good argument. So, it was perhaps fortunate Forest and Sheffield United didn’t meet during those turbulent years. But Clough did take his Forest team to Bramall Lane in the week before Christmas in the 1990-91 season.

It was a highly-charged affair. The Blades, bottom of Division One and without a win in 16 games, recovered from 2-1 down to win 3-2 thanks to a towering header from Brian Deane in front of 20,000 fans, sparking a huge pitch invasion.

It turned out to be the beginning of a glorious run under manager Dave Bassett, which secured United’s survival in the top flight that season.

Since the miners’ strike, which ended on March 6, 1985, Sheffield United have won 14 and lost 10 of their matches with Forest. Ten games have been drawn.

Forest fans will be hoping that this match is a less emotional encounter than either of those in 1990 or 2003. Both games this season ended in 1-1 draws and a similar scoreline at Bramall Lane might suit Forest with the second leg to play at home this time around.

‘I think it will be really tight,’ said Severn, who is lucky enough to have a ticket for both legs. ‘Nil-nil in the first leg and then us to pinch it at the City Ground,’ he hoped.

Whoever prevails, there will be another hurdle to clear. After their 2003 success in the semi-final, United went down 3-0 to Wolves at Wembley. This time, Huddersfield or Luton await – and the riches of the Premier League beckon.