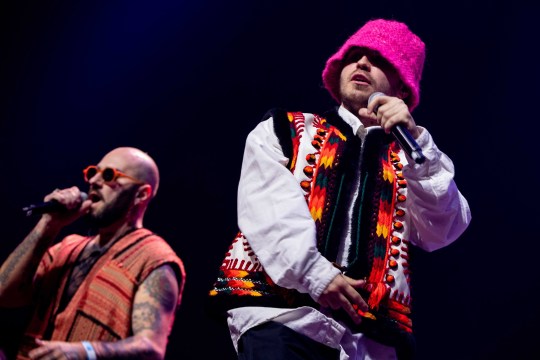 Europe will be voting in solidarity with Ukraine (Picture: EPA)

If it was a normal year would Stefania by Kalush Orchestra be in with a shout?

Probably not – in the general run of things a marriage of rap, folk flutes and crazy dancing might be a bit out-there.

But it’s got a catchy chorus and, with the blue-and-yellow flags fluttering, is bound to have a big emotional impact. Worse songs have won before, such as Toy (2018).

Party Fact: Kalush Orchestra only got the Ukraine nod after the original national contest winner Alina Pash was disqualified for having allegedly illegally visited the disputed region of Crimea.

Could this be our year? (Picture: EBU / Andres Putting)

It’s been 25 years of hurt and nul points since the UK last tasted Eurovision success but Sam Ryder’s soaring rendition of his self-penned star-gazing Space Man – even Radio 1 is playing it – is tipped to give us our best finish since Jade Ewen finished fifth in 2009.

The rehearsals buzz is all about Sam knocking it out of the galaxy – so we could be hitting the heights!

Party Fact: Sam Ryder (@samhairwolfryder) has 12.3 million fans on TikTok, the platform where his career took off.

Sweden are the Real Madrid of Eurovision, the side with a winning habit whom no one outside their fan base wants to win.

They’ve slipped a bit of late but with the raspily charismatic Cornelia Jakobs, they’re back on top form.

Her broken-hearted ballad Hold Me Closer sounds like a Eurovision winner but it all depends on the Ukraine factor.

Party Fact: Hold Me Closer only came second in Sweden’s televote behind national treasure Anders Bagge, a TV judge with a big fan base. But the international jury votes saw it selected.

Brividi means shivers in Italian and the romantics among you will goosebump to Mahmood & Blanco’s impassioned duet, their voices melding in a sensuous slice of classic Italian emoting. This one feels real.

If you’re someone who goes ‘novelty songs, no thanks’ then think again because Norway’s Subwoolfer – imagine Daft Punk go to Disney – rhyme ‘teeth’ with ‘Keith’ in the irresistible Give That Wolf A Banana.

Come on, have you even read this byline?

Party Fact: It’s widely rumoured that Ben Adams from ancient boy band A1 is one of the guys in the Subwoolfer Wolf masks. We so want that to be true. 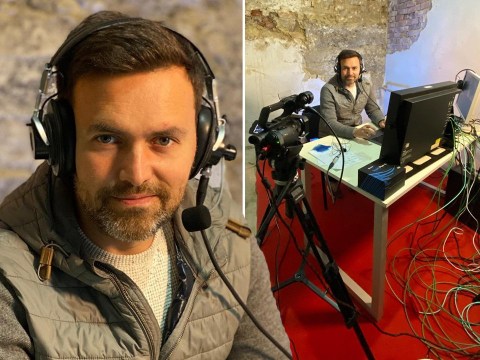 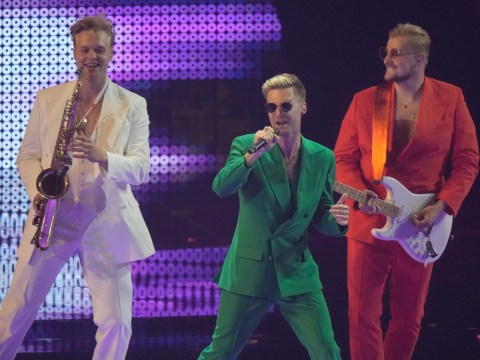 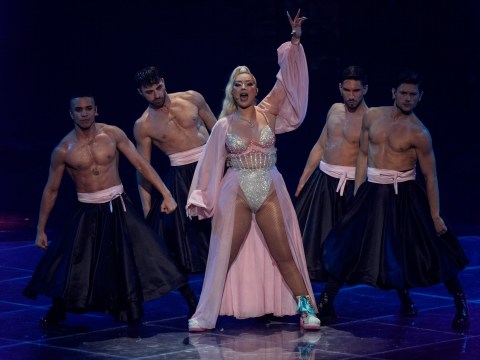 Chanel’s song is anything but slow motion (Picture: EBU)

Spain’s Chanel is, thighs down (and often up), the best dancer in the contest. And she’s got a cracking back-up bunch of leg-shakers to shimmy in unison.

Her song/aerobic workout is called SloMo but it’s fast and bound to bag the Zumba vote.

Party Fact: Chanel’s selection for Spain attracted a hate campaign from enraged fans of Ay Mama, a rival song dedicated to Spanish mothers that featured a giant breast (a model, not real) on stage. Honestly, not kidding.

Konstrakta is asking the important questions – how does Meghan Markle get her hair so shiny? (Picture: EBU / Andres Putting)

Quite how Meghan Markle gets a namecheck in a satirical song about Serbian healthcare is anybody’s guess.

OK, that’s not so much a fact, more a talking point, but Konstrakta’s In Corpore Sano is definitely different, a piece of performance art (there’s a lot of hand washing) in a sea of pop ballads. Niche.

S10, aka Stien den Hollander, sings the haunting De Diepte (The Deep), a moody folk/soul crossover that has a touch of London Grammar about it.

It’s too classy to win but it’s the song you’ll Spotify months from now.

Party Fact: S10 is almost certainly the only singer in Turin who risks being confused with both a Sheffield postcode and a motorway in Poland.

You won’t forget Aussie singer Sheldon Riley’s look – the full cape topped with a metal face mask, which he whips off – as his song Not The Same reaches a climax.

Party Fact: Riley is autistic and his song is about his experiences.

Our predictions for the night

Germany’s Eminem impersonator Malik Harris looks a fair bet to be down in the gutter with his rap-by-numbers effort Rockstars.

MORE : What are the latest odds for Eurovision 2022?