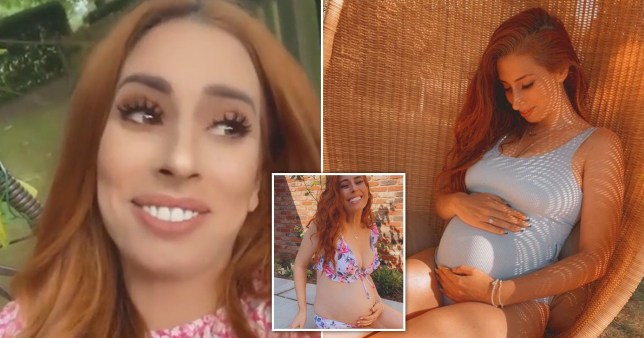 Stacey Solomon cleared up that she hasn’t ‘secretly’ given birth to her fourth child after a fan claimed she ‘doesn’t look pregnant’.

The Loose Women star and fiancé Joe Swash are expecting a girl, their second child together.

Stacey, 31, has been sharing her pregnancy journey on social media with her fans from decorating her daughter’s nursery to her baby shower at the weekend in the couple’s Essex home, organised by her sister Jemma.

On Instagram she shared a message she had received from one of her followers who asked if she had already given birth.

Stacey patiently explained that it appeared that way because of the loose top she was wearing, and she is not expecting her first daughter for ‘a few more weeks’.

‘You don’t look pregnant have you had baby girl?’ they said, adding two kisses.

The X Factor star replied: ‘I promise I haven’t secretly had the baby and just casually come on here like nothing happened.

Stacey explained it was the top she had on (Picture: Instagram)

‘I’ll let you know when I go into labour. It’s just this top.

In the clip she said: ‘I promise I haven’t secretly had the baby’ before pulling up her top.

‘She’s still in there! It’s just this top I think. A few more weeks left hopefully.’

Stacey revealed her nearest and dearest thought the pink-themed baby shower was actually her and 39-year-old Joe’s wedding.

She told OK! Magazine: ‘So many people messaged me like, “Is this a secret wedding?” And I was like, “No! Does it not look like a baby shower?”’

The TV star shared a series of adorable snaps with her 4.6m followers, showing Joe cradling her baby bump and gazing lovingly at his wife-to-be.

The happy couple grinned from ear-to-ear as they enjoyed the beautiful afternoon, with Loose Women co-stars Jane Moore, Nadia Sawalha and Judi Love also in attendance.

Stacey and Joe were due to get married in July, but postponed the big day after she fell pregnant so all their children can be at their big day.