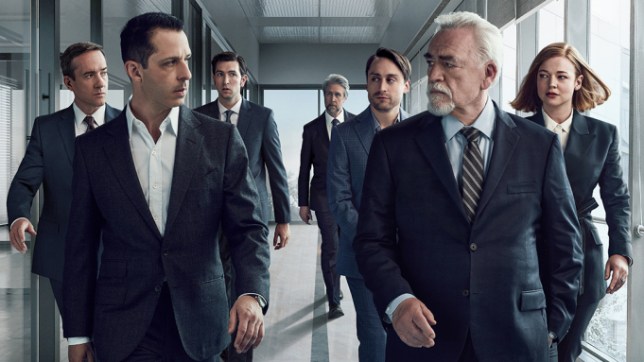 Can’t remember what happened in season 2? We’ve got you covered (Picture: HBO)

Succession season 3 is just hours away from launching and so, naturally, we’ve created this helpful recap on all the major points from the previous chapter to help jog your memory.

The HBO drama following billionaire Logan Roy and his children’s fight to be named successor of his business empire has become one of the most acclaimed shows around since first arriving in 2018.

The upcoming instalment, which sees the return of Brian Cox, kicks off immediately after the events of the series two finale.

‘Following his bombshell presser, a righteous Kendall scrambles to find a base of operations, while Logan’s team searches for safe harbor,’ the synopsis for episode one teases.

Can’t remember what happened in series two? Don’t worry, we’ve got your back.

Just 48 hours into his stay, Kendall is called away to give a public statement regarding his decision to back off from his part in the hostile takeover. Kendall is instructed to simply say, ‘I saw their plan, and my dad’s plan was better.’ He follows the plan, with Logan declaring it’s the first thing he’s done right. Logan’s financial adviser Jamie Laird then suggests that he sell the company and name his successor.

Logan asks Shiv to come in and be the next chief executive behind closed doors during a family trip to their Hamptons home. The job is offered when Logan is unable to extract an honest opinion from his children about whether he should sell the company. As a result, he has each of his children individually meet him in his office. Shiv is eager for the opportunity but doesn’t disclose it to Tom. Instead, she tells him he has been promoted to ATN’s Chair of Global Broadcast News.

Connor is toying with the idea of running to become President of the United States.

The battle for PGM begins

Logan decides he wants to acquire media rival Pierce Global Media (PGM) against the counsel of his inner circle. During dinner, he finds out that PGM is already aware of his plans, and subjects Greg, Tom, and Karl to an outrageous game of Boar on the Floor until the source is revealed. Kendall finds out that it was Roman who reached out to PGM, though Roman insists that he did so to help secure the deal. Logan and Kendall meet Rhea, the CEO of PGM, who relays the Pierce family’s disinterest in selling their company. The Roys offer $24billion for the company, which sparks the interest of the owner, Nan.

The roys meet with the pierces

The Roys spend a weekend with the Pierces at their family estate. Conversation between the two families grows increasingly tense during dinner, with Nan asking Logan who will replace him as CEO. When Logan refuses to answer, Shiv announces to the room that she has been chosen. The following morning, Nan agrees to sell PGM to the Roys on the condition that Shiv is named Logan’s successor on the day of the merger. Logan refuses and calls off the deal. However, he receives a call soon after saying the Pierces have changed their mind.

The Roys learn that New York Magazine has written an expose about the company’s cruise line. Kendall, Roman and Shiv take the stage for a scheduled panel discussion, but offer conflicting responses to questions about the scandal. Shiv shocks the audience when she makes remarks seemingly suggesting that Logan should step down from the company. A row ensues after the event, during which Logan hits Roman. Nan decides to call off the PGM deal and fires Rhea for betraying her and siding with Logan.

Rhea is named as Logan’s successor

Realising that Rhea will bear the burden of the scandal as CEO, Shiv gives Logan her approval to name Rhea as his successor. Logan and Kendall later testify in the cruise scandal, with Logan deflecting the blame onto Kendall. After the hearing, Rhea tells Logan she no longer wants to be CEO. Logan tells Shiv that a ‘blood sacrifice’ will have to be made to appease the company’s shareholders

logan puts the blame on kendall

Logan gathers his inner circle where he reveals that someone will have to take the fall for the cruise ship scandal. Shiv volunteers Tom but Logan selects Kendall. ‘You’re across the clean-up,’ Logan tells him. ‘The optics make sense and now you’re the face. You’re not a killer. You have to be a killer.’

Kendall attends a press briefing where it’s presumed he’ll take the rap. However, in an almighty twist, he puts the blame on his father instead. ‘The truth is, my father is a malignant presence, a bully and a liar. This is the day his reign ends.’ Logan watches the scenes and end credits roll.

Succession season 3 arrives on Monday October 18 on Sky and NOW.