Tallulah Willis and her fiancé Dillon Buss just escaped Los Angeles to enjoy a much needed vacation in Sayulita, Mexico.

The 27-year-old daughter of Demi Moore and Bruce Willis was seen modeling a range of bikinis during her stay at the Conrad Punta de Mita.

Dubbing the vacation thus far ‘a hoot n’ a half,’ she posted a carousel of images while soaking up the sun in her very stylish swimwear. 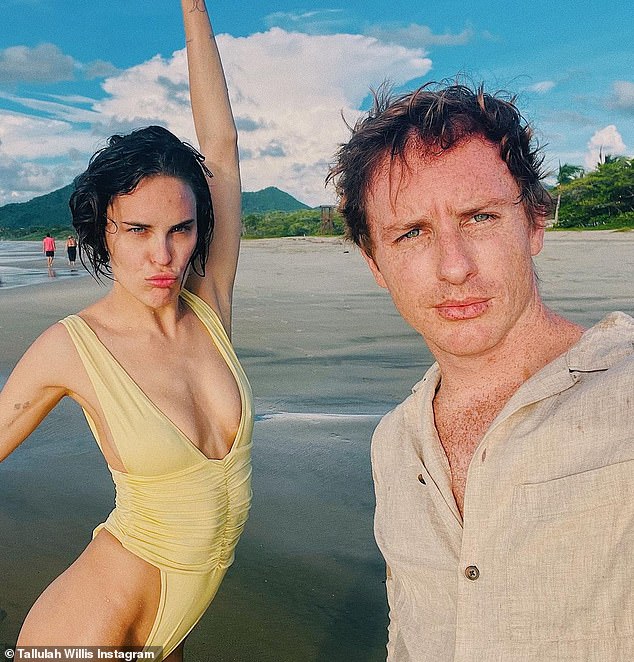 Rest and relaxation: Tallulah Willis enjoyed a luxury vacation in Sayulita, Mexico with fiancé Dillon Buss where she soaked up the sun in a range of stylish swimwear

The couple looked blissful in a selfie as Tallulah modeled a plunging yellow one piece, which she also donned in a snap as the tide rushed towards her.

Other images included her wearing a patterned bikini bottom that showed off a bit of her backside, while gazing at the expansive sea with her toes in the water.

In another artful shot she floated on her back in the pool while wearing a white bandeau top with a blue bikini bottom.

‘What a hoot n’ a half!’ she remarked of the pair’s luxury escape, which began on Sunday. 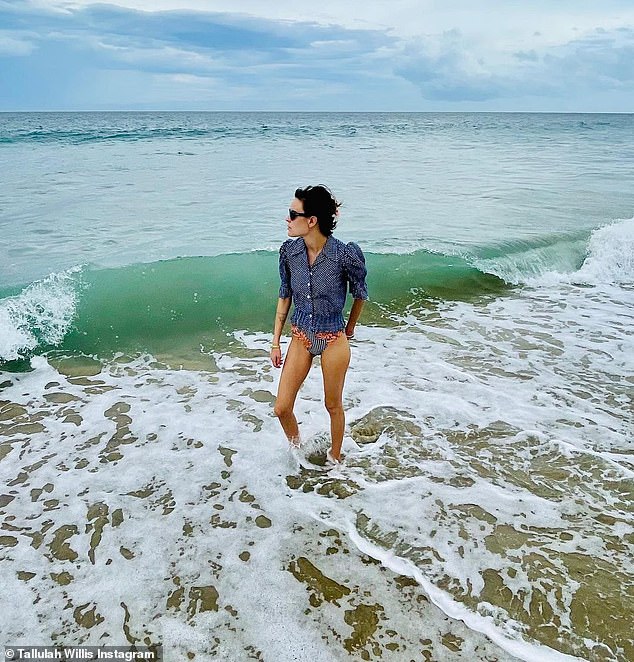 Living the dream: In one image she modeled a patterned bikini bottom with a stylish blouse on top while gazing at the ocean 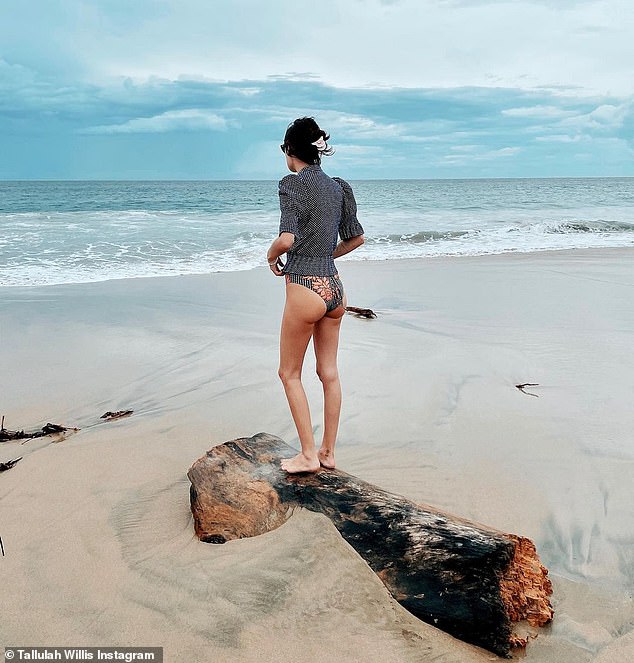 Cheeky: She looked stylish while taking in the landscape during her stay at Conrad Punta de Mita

Tallulah and the photographer/director got engaged in early May after dating for about a year. Of her response when he popped the question she affirmed: ‘With absolute most certainty.’

They quarantined together at Demi’s ranch in Hailey, Idaho along with sisters Rumer, 32, and Scout, 30, and in an October 3 birthday tribute she made their strength as pair known.

‘Our story bloomed in a chapter of history we didn’t see coming, and in this unfamiliar landscape we choose to hold on, to discover one another and for me, finally found Home,’ she wrote in excerpt.

And the close knit family made their support for the pair’s relationship known in a myriad of congratulatory posts after Buss proposed. 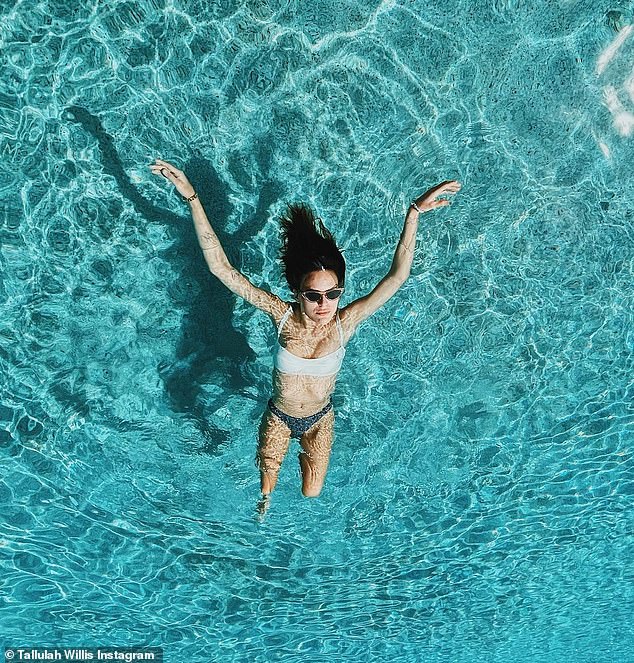 Vulnerable: The Wyllis designer has been very open about her struggles with mental health and body image, and even recently opened up about getting lip fillers in the hopes of elevating her ‘damaged self perception’ 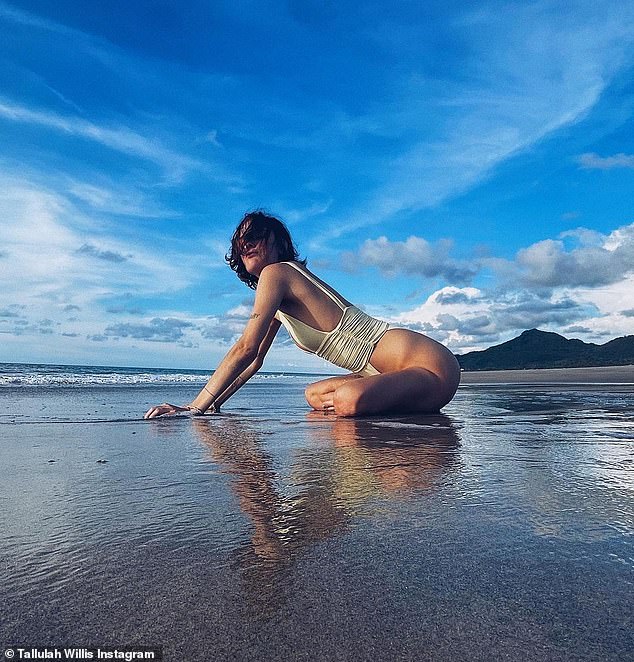 Leaning in: In one image she crouched down in a yellow one piece as the tide rushed towards her

The Wyllis designer has been very open about her struggles with mental health and body dysmorphia, and even recently opened up about getting lip fillers in the hopes of elevating her ‘damaged self perception.’

‘I had been so optimistic a vile of Juvaderm would heal my damaged self perception (it didn’t, it never has, and it never will. The real healing is done through compassionate inner dialogue and actions that support your self care,’ she wrote on September 27.

In another instance she had spoken about ‘punishing’ herself for not looking like her mom. ‘I resented the resemblance as I believed wholly my “masculine” face was the sole reason for my unlovability.’ 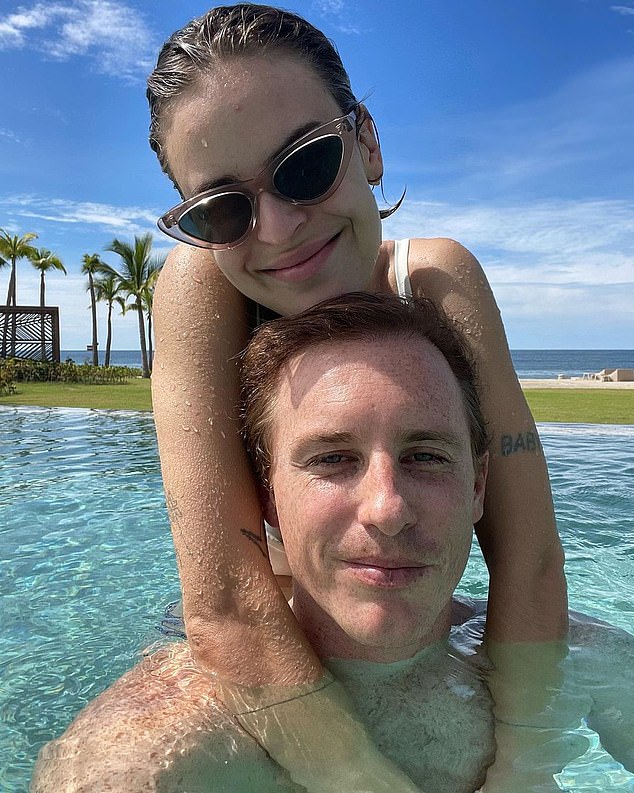 Fiance: The photographer/director popped the question in early May and in a gushing birthday tribute she spoke about their quarantine love story as she said that they ‘bloomed in a chapter of history we didn’t see coming, and in this unfamiliar landscape we choose to hold on’; pictured October 11