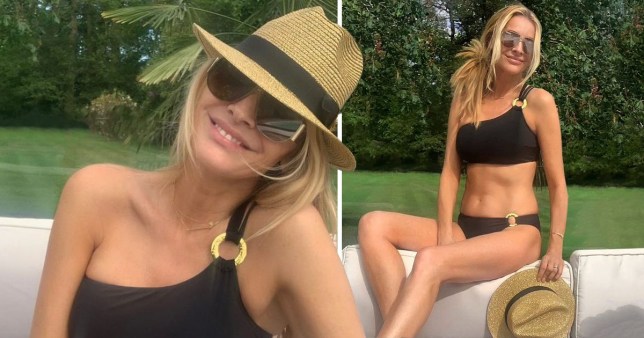 Tess is soaking up the sun during the UK’s heatwave (Picture: Instagram)

Tess Daly is definitely making the most of the UK’s heatwave as she posed in a black bikini for a sizzling new photo.

The presenter looked stunning as she donned the two-piece swimwear from Naia Beach, with the strap and hip featuring gold metal hardware.

She added a pair of sunglasses to her ensemble, while she clutched a large straw hat in her right hand.

For the image, Tess sat atop a sofa situated in her back garden, alongside a copy of Brit Bennett’s novel The Vanishing Half.

‘Summer uniform,’ she captioned the post. ‘Wearing HERA from @naia_beach.’

The 52-year-old later added another snap to Instagram Stories, in which she smiled while wearing the sunhat on her head.

She wrote: ‘If only every day could be like this! #summer #staycation.’

Tess stunned in a black bikini as she sat atop of a sofa (Picture: Instagram)

Fans were quick to compliment Tess, with one commenting: ‘Looking amazing Tess!’

One enthused: ‘Love the design you look so strong.’

Tess had previously celebrated her age after posing for a striking photoshoot for Women’s Health magazine in March.

In the images, she oozed confidence as she wore a range of stylish lyrca ensembles and leotards.

Tess recently opened up about being in her 50s (Picture: WireImage)

The Strictly Come Dancing host also opened up about being in her 50s, claiming she doesn’t feel ‘any different’ now compared to when she was in her 30s.

‘Confidence comes from cutting yourself some slack,’ she told the publication. ‘I’m in my 50s now. That’s still a shock when I say it out loud because I don’t feel any different to when I was in my 30s.’

Tess explained that she ‘doesn’t fixate on age as a limitation’, adding: ‘Confidence, to me, is just pushing yourself a little bit further than you think you can ago, and you’ll always surprise yourself.’

She also praised her ‘soulmate’ husband Vernon Kay, who she married in 2003, stating: ‘It’s been a ride. And I love him more than ever.’