Welcome to Metro.co.uk‘s The Big Questions, where we ask, well, the big questions (and the smaller ones too) and this week, we’re diving deep with TV queen Scarlett Moffatt.

But we must ask – please spare a thought for Scarlett, 31, on this fine Saturday, as the Gogglebox star and I’m A Celebrity jungle queen is in the thick of Dry January. Still, despite the severe lack of alcoholic fizz, it’s got her thinking clearly, feeling fresh and ready to take on 2022 with the kind of pizzazz we’ve come to love from the lass.

Here we unpack everything from Richard Madeley being a vampire (something we can neither confirm nor deny) the best advice she’s received from Ant McPartlin and Declan Donnelly and why one should, at least once in their life, eat pizza in a bikini by the pool

Every year I say I’m gonna do it because I feel like December is such a heavy month, it’s nice to have a detox. Volvic has done some studies and the polls showed that the second week is when most people give up in Dry January and that’s usually me. But I’m determined to see it through!

I’m going to be releasing different mocktail recipes each week, I feel like that gives you a burst of “I can get through it, I’m having something tasty”.

Hangovers hit harder the older you get, right?

I used to think I was immune to them, “Wow I’ve been born with these genes that I just don’t get hangovers”. Then I turned 25 and realised it was just because I’m young.

Also this year I’m wanting to work on lots of passion projects on TV, and my podcast, and I think doing Dry January will help me have a clear head and visualise goals, not working on a hangover.

Without sounding cliche, blessed, because for everybody coming out of 2021, being healthy, alive and working is something we can grasp with both hands, because it’s been such a hard year for everyone. I feel really lucky. There’s been ups and downs for everyone, but it’s a new year, I feel like this year went so quick… 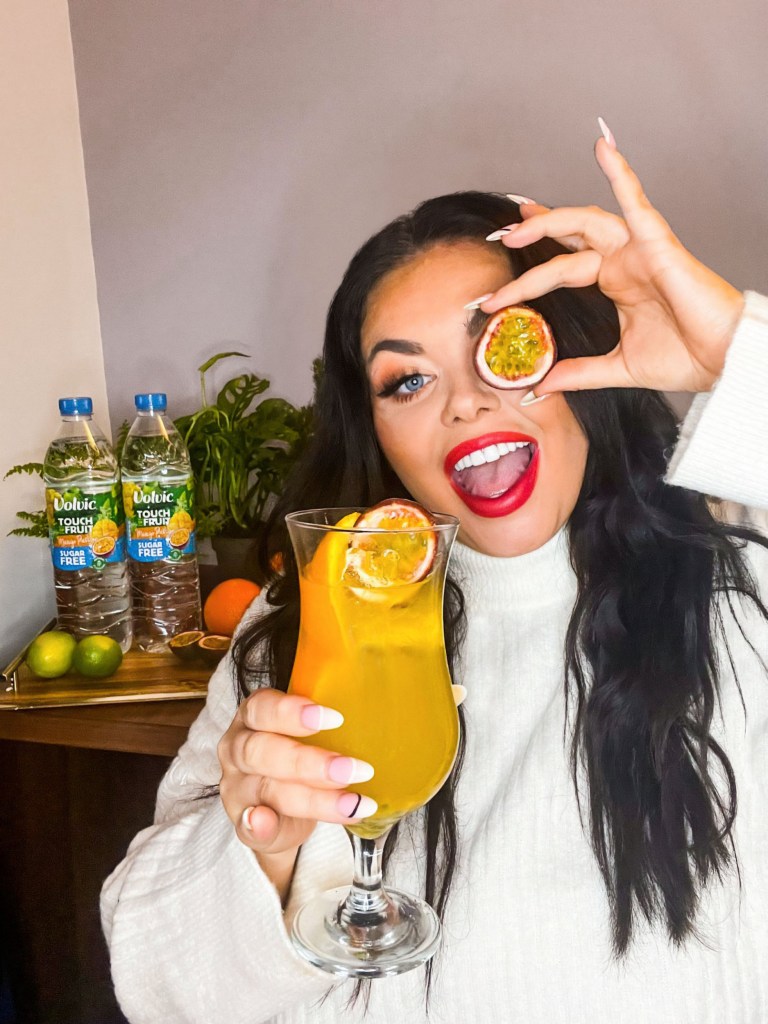 It really has and I’ve done lots of exciting things I can’t wait for people to see. 2021 has been a different year for me. Usually, I’d so shiny, studio floor stuff, but I’ve done more investigative, documentary-style stuff.

Well, I am very obsessed with your podcast, Scarlett Moffatt Wants To Believe. How much fun is it to be at your point you can take on passion projects like this?

This time of the year always makes me feel very lucky, and I look back at where I started. Obviously, Gogglebox played a big part in changing the way that I live my life, but for me, I’m A Celebrity changed everything.

I was in there back in 2016 and I always love seeing the new winner and following their journey. It’s such an amazing platform and I feel lucky to still be on the telly.

When I said I’d do I’m A Celebrity, I thought, one, I’m a massive fan, secondly, I’ve got to meet Ant and Dec, but I thought if I can have six months to a year of doing something I love, being on telly and learn as much as I can, then I’m really lucky. So the fact it’s gone into 2022 and I’m still here, I pinch myself.

Did you watch the last season of I’m A Celeb?

I did and I loved it, I’m really happy Danny won. I do love Frankie as well.

Ok, so you won in the jungle, but do you think you’d be crowned queen of the castle?

The thing is, everyone complains about the cold, but I’m Northern so I think I would have had an advantage there. I’d be walking around the castle with no jacket on.

Going back to your podcast, you shared a conspiracy theory Richard Madeley is a vampire, hence why he doesn’t age. Has Richard responded to that?

I know Richard and I think I know he would have taken that as a compliment. Because he does look so young!

We wish he lasted longer on I’m A Celeb…

I’m really hoping they bring him back next year. It would be lovely because I always remember he came on the Extra Camp show I was hosting and I said “you’d be such a good campmate” and he was telling me all these stories. We didn’t get to see any of those, so I hope he goes in next series.

Having been in the industry for as long as you have, and from such an age, can you pinpoint a piece of advice from someone you still live by?

I was very fortunate to work with Ant and Dec…it was like going to the university of presenting.

A good tip I learned, is making people feel comfortable. So when I’m interviewing or working with people who’ve never done TV before, like Love Bites, I always make a couple of mistakes, purposely, at the start of any show. And that makes people realise, “ah, this is her job and she’s made a mistake”, and it doesn’t matter, you can do it again. It instantly puts people at ease. The atmosphere is so much better.

You were recently a guest editor for Metro.co.uk’s Mental Health Awareness Week – how important is that conversation for you in the public eye?

I’m an ambassador for Samaritans now, and something I do focus on. There is a community of people online, like Bryony Gordon, Elizabeth Day, and for so many people on the outside looking in, you’d think they’d never have a problem, they’re living the dream. Thankfully, they openly speak about the struggles.

I think there is less of a stigma attached [to speaking about mental health issues]. We still have a long journey to go, but the campaigns of people like Dr Alex George as well, it’s getting people talking at an earlier age. That’s key. And where social media plays a part, if we can tap into young people so they know their own minds and the things to look out for.

Even 10 years ago if you told someone you were getting counseling or therapy they’d be muttering under their breath as you left, but it’s not like that now. It’s the same as going to the doctor if you have a broken ankle. I think the more we talk about it, it can only do good things really.

Recently you were telling people to embrace the ‘boob gap’. Do you feel like you’ve reached a place of body positivity, or will it always be a journey?

If I’m totally, 100% honest with myself and you, no, I think I’m lying if I said every day I look at myself and say “yeah, you sexy thing”. As women, and men as well, we are very critical. But what got it for me was I realised how much I was missing out. I’d say things like, “no I’m not gonna go to that pool party, I’ll go next year when I’ve lost weight”, or, “no, I’m not gonna go out for that meal because all my mates will be wearing bandage dresses and I’ll look out of place”.

When I looked at how many events I’ve missed I got so upset and promised myself I’d never do that. And in doing that, I’ve become a much happier person.

I can’t tell you how liberating it was, when I went on holiday with [boyfriend] Scott [Dobinson], I wore a bikini and realised no one gave a sh**. No one cares, and if they do they’re not enjoying their holiday. I was eating pizza around the pool, which sounds pathetic to some, but to me that was a big thing. I was sat, eating a pizza in front of people in a bikini.

Honestly, no one cares as much as we think they do. I think we’re a bit self-obsessed thinking everyone cares.

So, you’re a TV presenter, author, podcaster – what else is on the list to tick off?

Definitely first port of call, tick Dry January off. Also, pass my driving test. I’m determined. 2022 is the year for that. You’ll see me riding around in my little whip.

It’s Saturday morning, what are you doing?

Weekends are my lie-ins, but my little chihuahua Bonnie wakes us up at nine and then it’s wellies on and we take her for a walk. I normally make breakfast. I’m into making french toast but it’s not as fancy. You basically just whack a bit of egg on bread, then add Nutella.

We might see our friends, who are drag queens, do a show, we might go shopping. We like doing the ‘big shop’. Me and Scott like gaming so I’ll probably play a bit of Sims, then in the night, we prefer people coming around, so we’ll probably have our friends come around, I’ll make some food, and some little mocktails.

Me and Scott are creatures of habit, we do tend to watch the same things. I really like the film About Time, that always makes me cry. I’m gonna sound weird here, but sometimes on a Saturday we do like watching a horror, so maybe Final Destination. It’s not cosy, but I do like a bit of a horror film.

So, avocado on toast with a runny poached egg. I didn’t eat an avocado ’til I moved to London, so I would have been 26. I remember FaceTiming my friend Sarah eating my breakfast and she asked if it was guacamole, “why are you having nacho sauce for your breakfast”. No, they eat it down here for breakfast!

How have your weekends evolved?

10 years ago I would have been at university. We are still all best friends but we were a little bit wild. We used to pre-drink… we use to drink before we went out going drinking. Who invented that? That’s my worst nightmare now. We’d start getting ready at 7pm and sometimes we’d go to a place called Willow where you’d get free prawn crackers at 3am.

They’re a lot more chilled now. We prefer hosting, and I always wanted to be that person, who has dinner parties.

Scarlett Moffatt has teamed up with Volvic Touch of Fruit to release a delicious series of tasty Mocktails each week to help beat the January blues.