Filming for the upcoming The Flash movie continued in Glasgow on Tuesday, as a Batman body double suited up once more to ride a motorcycle.

The film, which also shot in London last month, stars Ezra Miller in the lead role while both Ben Affleck and Michael Keaton are reprising their roles as the Caped Crusader.

The body double sported the iconic cape and cowl of the Dark Knight as he filmed shots on a motorcycle.

The Flash: A body double donned Batman’s iconic caped outfit to drive a motorcycle through Glasgow for another day of filming The Flash on Tuesday

It seemed the filming was focused on an action sequence, with police cars seen in the background of some shots with their flashing lights on.

The front of the motorbike had a unique design in that it appeared to have been designed with two front wheels in mind.

The Flash is the latest film to be shot in Glasgow after the city was recently transformed into 1960s New York for filming of Indiana Jones 5 where Harrison Ford’s body double was seen earlier this month. 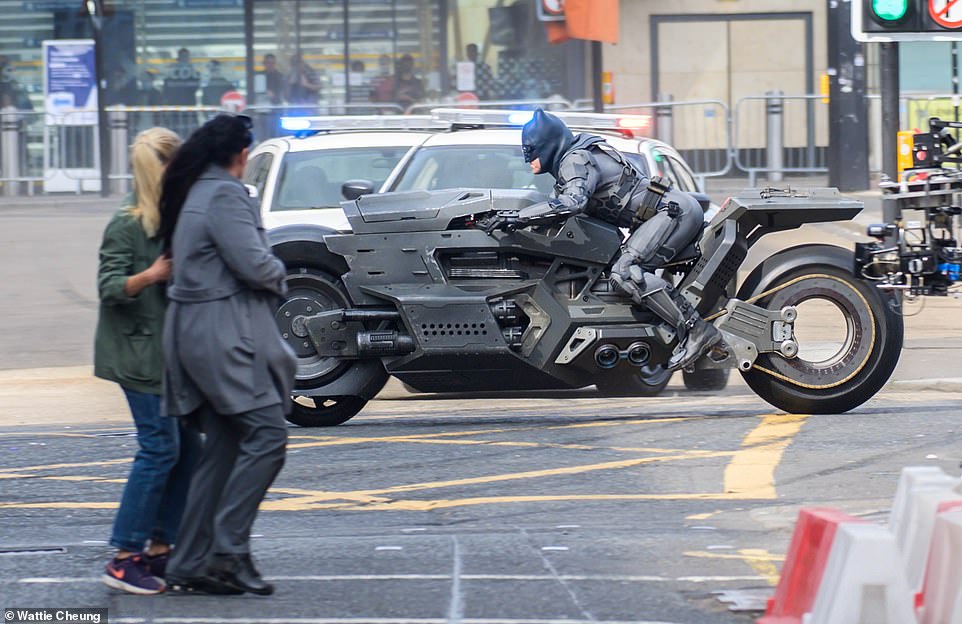 All action: The film, which also shot in London last month, stars Ezra Miller in the lead role while both Ben Affleck and Michael Keaton are reprising their roles as the Caped Crusader 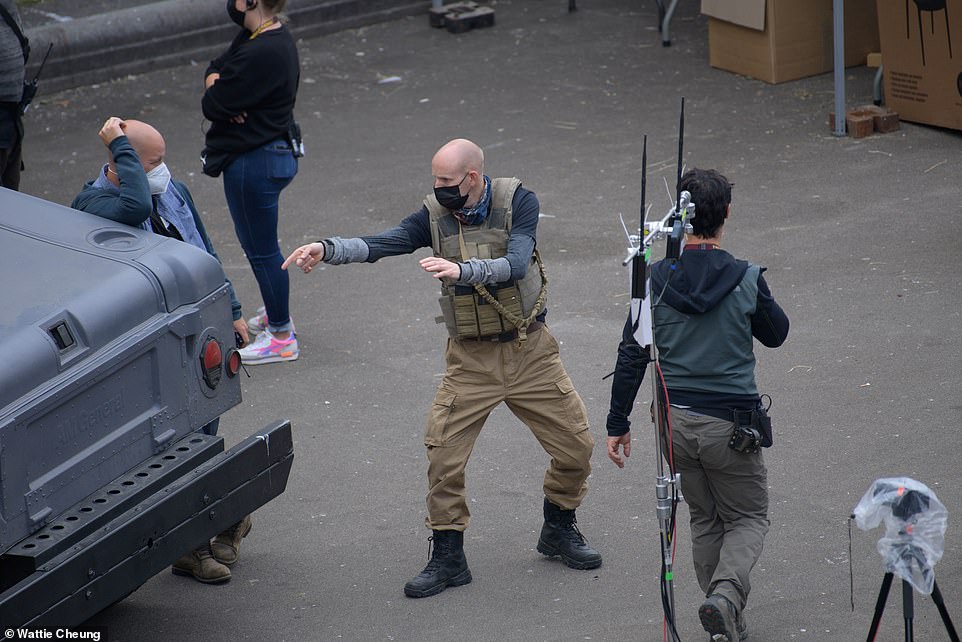 Directing: Members of the cast, in costume, appeared to be animated between takes

Michael Keaton has already been spotted filming in London but has yet to be seen sporting his Batman costume, implying he may only be returning as alter ego Bruce Wayne.

Ben, who played Batman more recently, has yet to be seen on set.

The film sees The Flash travel back in time to prevent the murder of his mother, triggering a string of unexpected consequences in the process, including meeting Batman in a parallel dimension.

The Flash was originally scheduled for release in 2018, although it was later pushed back due to its troubled development process.

Director Andy Muschietti was brought on to helm the feature. It was rescheduled for a June 2022 debut and was eventually pushed back to November 4th of that year as a response to the onset of the global pandemic. 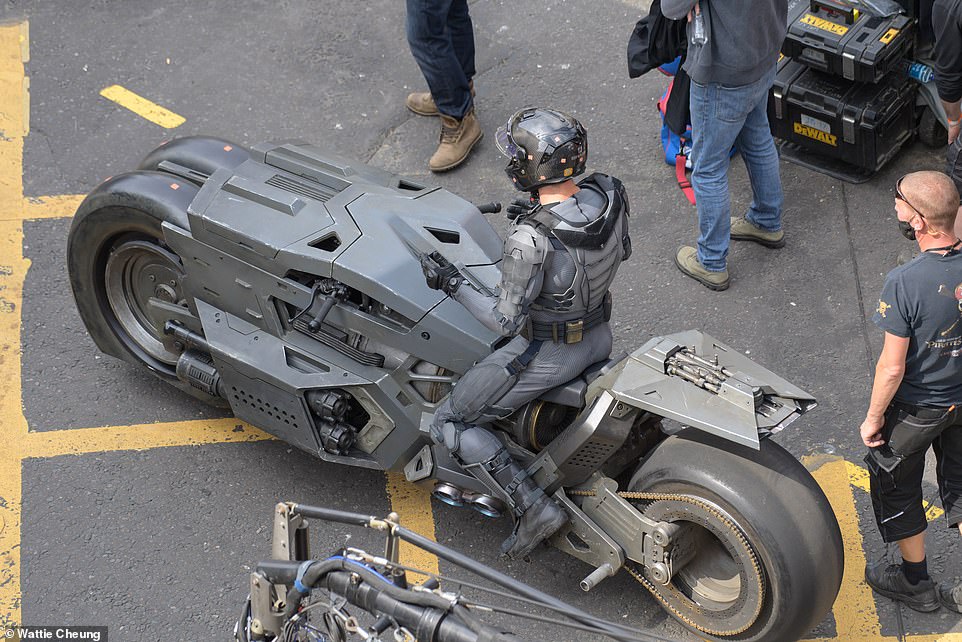 Ready to ride: The stunt double did not wear the full Batman costume for every take, opting for a more slim-lined outfit on occasion 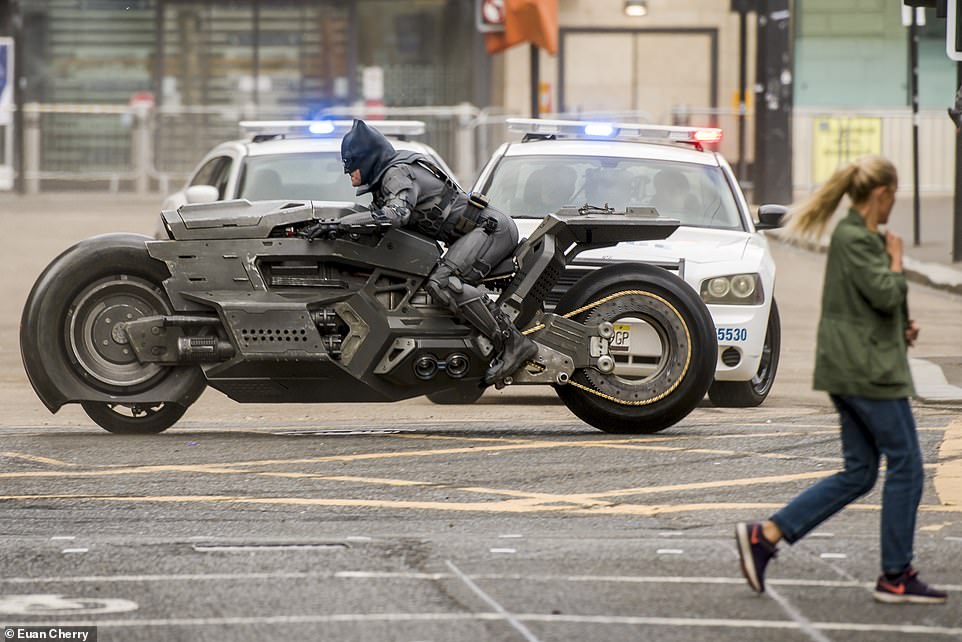 Dark Knight: The sequence being filmed appeared to be full of action, with police cars being spotted in the background

The actor was announced to be taking up the helm of the Caped Crusader in the much-awaited film this past April, although he was first speculated to have been involved with the project in June of last year.

Muschietti’s photo showed Batman’s iconic insignia that is typically placed on the center of the character’s costume.

A few drops of what appeared to be blood were notably spattered across its front.

The image seemed to signal that Keaton would be returning to his former role in the forthcoming superhero film. 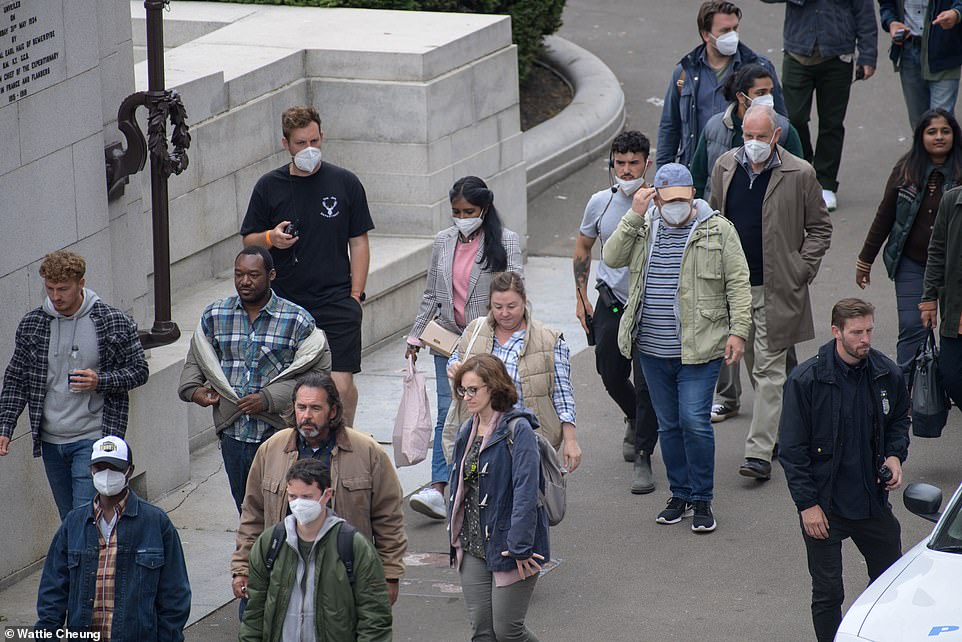 Big production: As expected of such a large production, a huge number of crew members were present at the shoot location 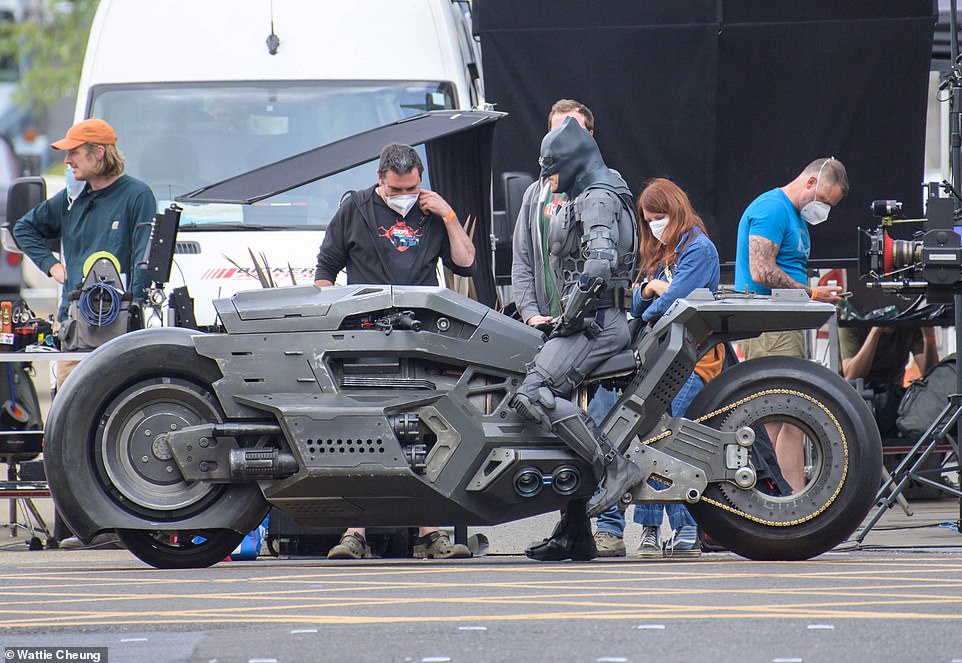 Between takes: The Batman stunt double had his gloved hands on his hips between takes while he sat on the motorbike

The Birdman star’s first time portraying the character was in 1989’s Batman, which was directed by Tim Burton.

The feature was well-received by critics upon its release, with many reviewers pointing to the actor’s performance as especially strong.

Michael went on to portray the character in the film’s sequel, Batman Returns, which was also helmed by Burton and released in 1992.

After the Ed Wood director stepped down from a planned third sequel, the Beetlejuice actor also left the series, and the two were replaced by Joel Schumacher and Val Kilmer, respectively. 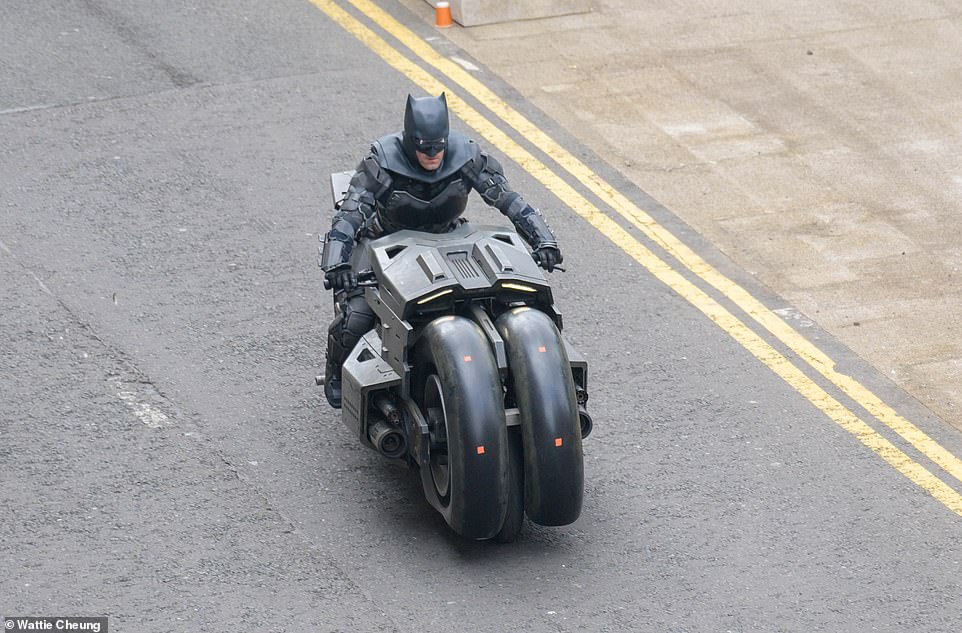 Determined: The stunt double looked every inch the caped crusader as he rode on the motorcycle through Glasgow’s streets 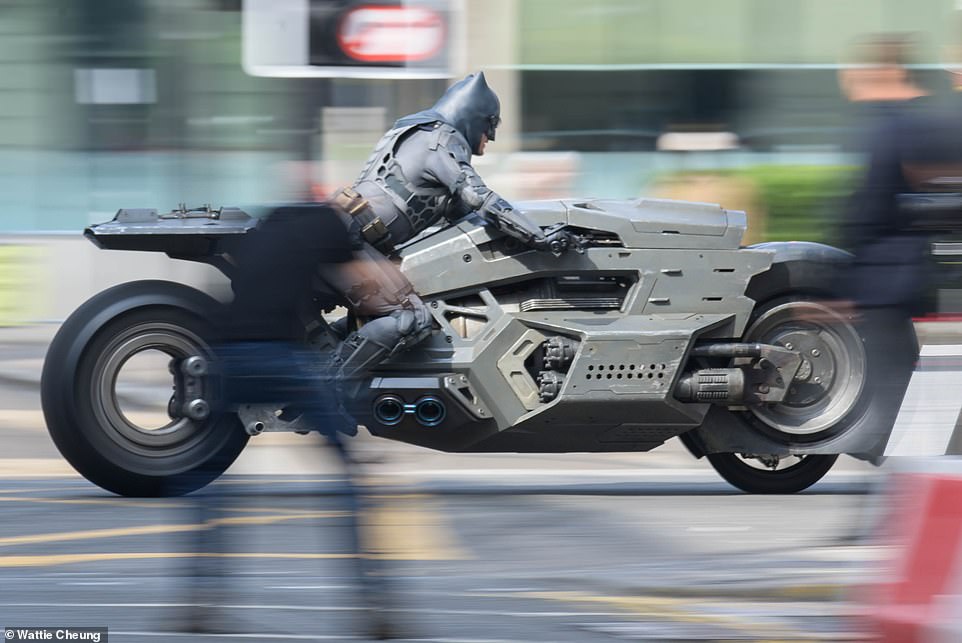 High speed: Everything around the motorbike seemed to blur as the stunt double rode along

Other actors who have taken up the helm of the Dark Knight since then include George Clooney and Christian Bale, among others.

Ben went on to portray Batman in the 2016 feature Batman V Superman: Dawn Of Justice and played the character in several other features.

The 48-year-old actor was initially supposed to direct, write and star in the upcoming feature The Batman, although he later left the production and was replaced by Robert Pattinson.

Both Ben and Michael are set to portray younger and older versions of Bruce Wayne in The Flash. 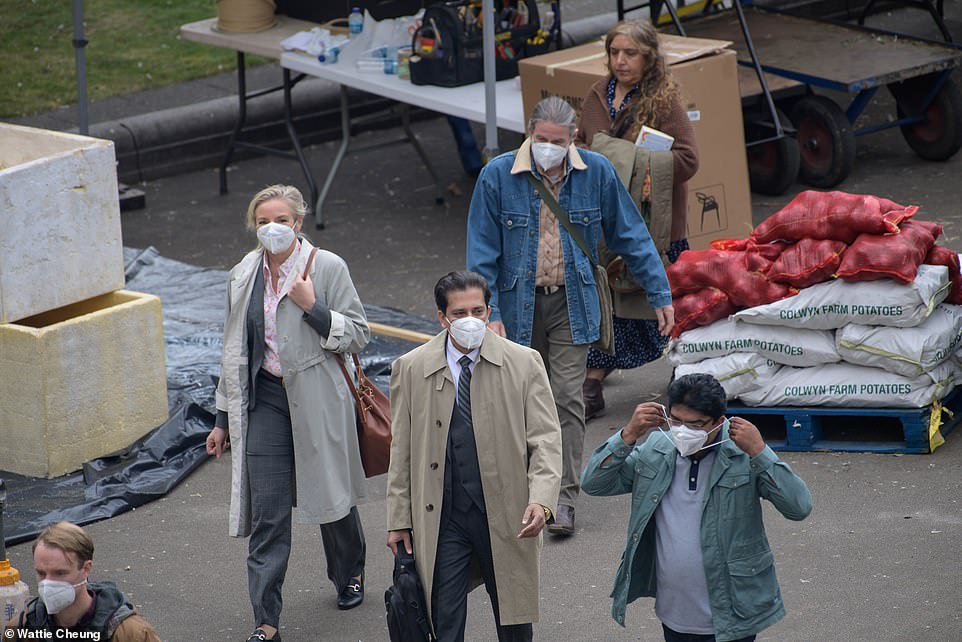 Delays: The Flash was originally scheduled for release in 2018, although it was later pushed back due to its troubled development process 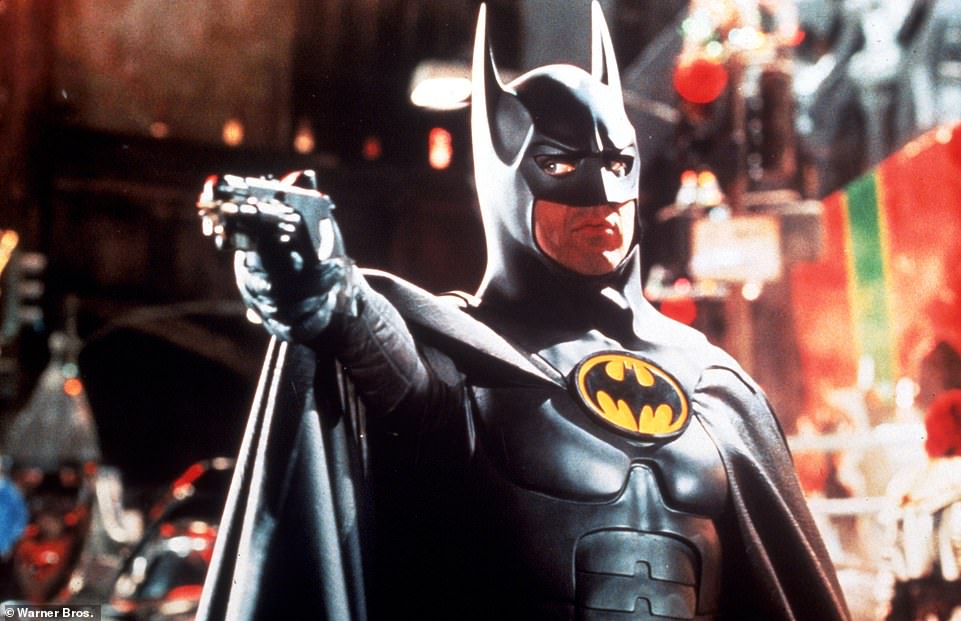 Career: Michael’s first time portraying the character was in 1989’s Batman, which was directed by Tim Burton and was followed by Batman Returns (pictured in Batman Returns in 1992) 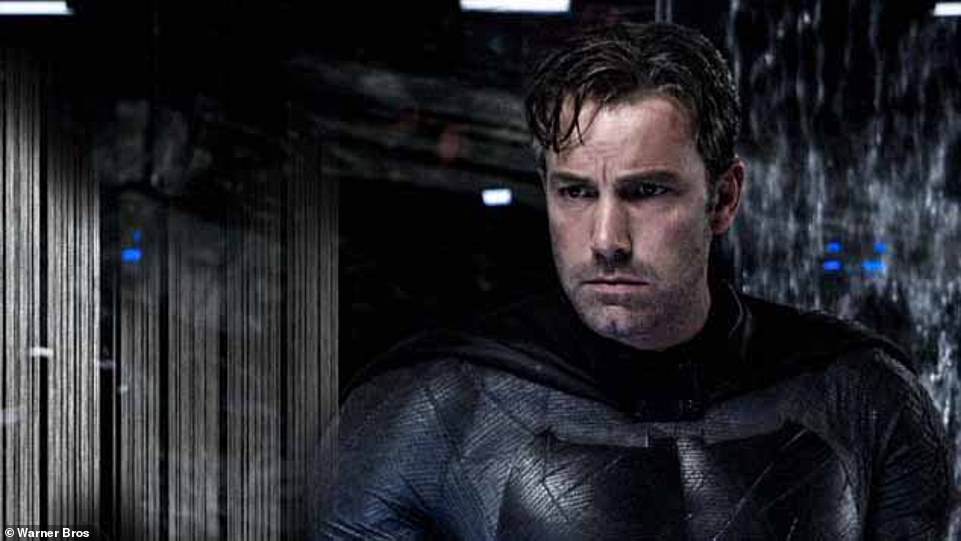 Role: Ben went on to portray Batman in the 2016 feature Batman V Superman: Dawn Of Justice and played the character in several other features

A film based on the DC Comics character had been in development for several decades, with several aborted attempts to create a movie about the superhero occurring over a period of roughly thirty years.

The feature went through several prospective directors, including Rick Famuyiwa and Seth Grahame-Smith, before Muschietti stepped in to helm the flick.

The Barry Allen version of The Flash will be portrayed by Ezra Miller, who first played the speedster in Batman V Superman: Dawn Of Justice.

Other performers who will appear in the long-awaited movie include Kiersey Clemons, Sasha Calle and Ron Livingston.

The feature will follow the titular character as he travels back in time in order to prevent the untimely death of his mother, which causes consequences to occur in his own timeline. 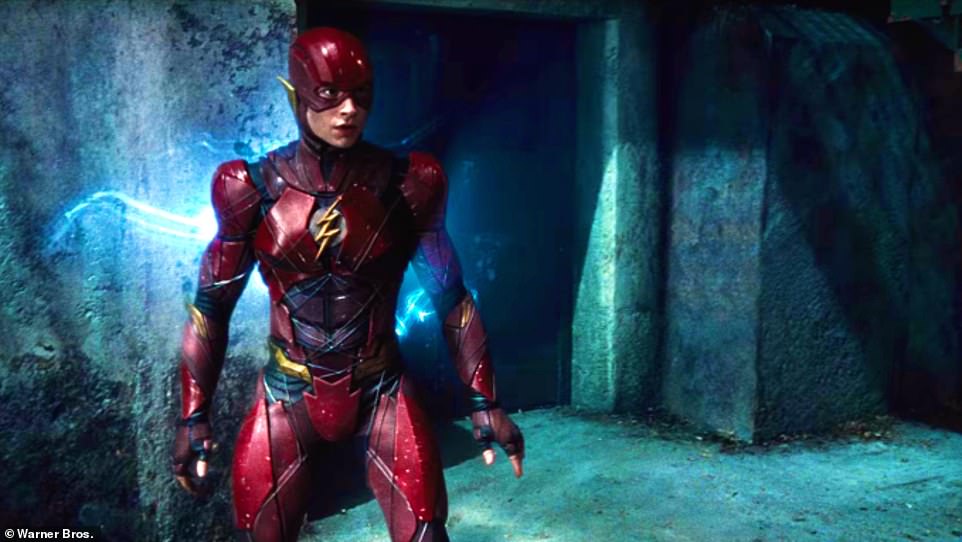 Lead: Ezrea Miller is reprising his role as The Flash which he most recently played in Zack Snyder’s Justice League 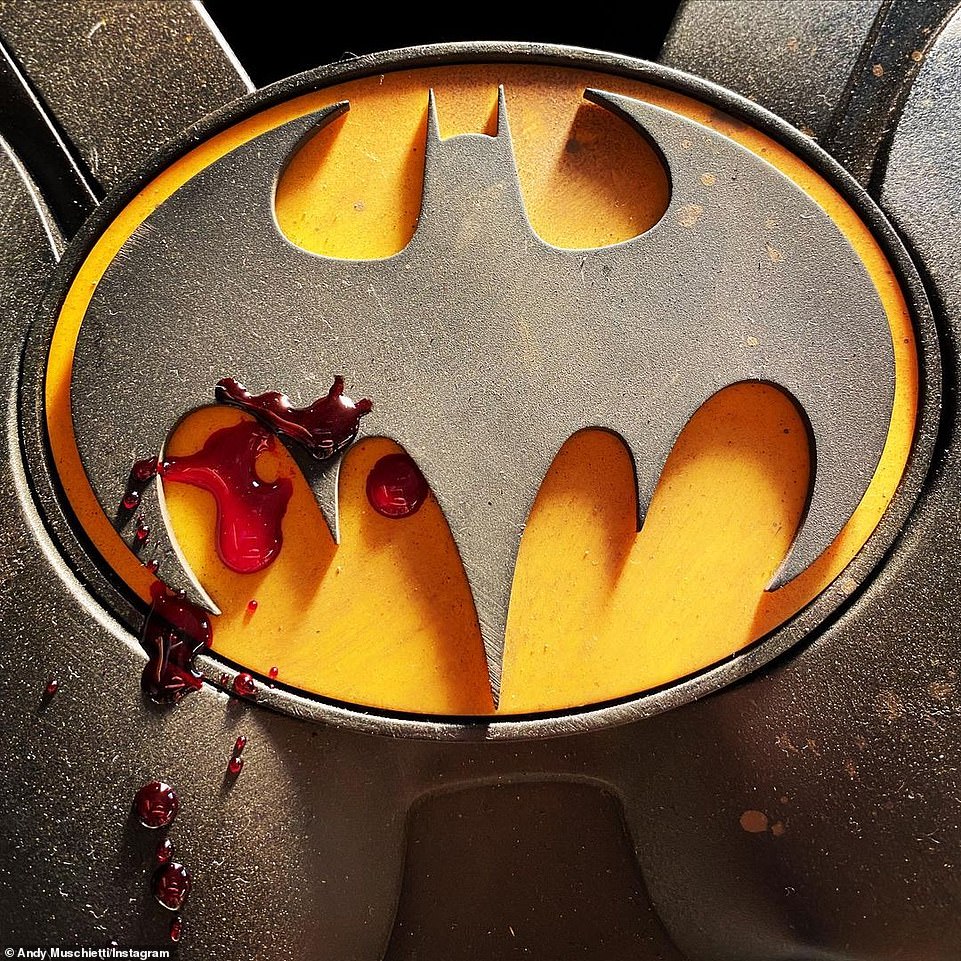 An inside look: The Flash’s director, Andy Muschietti, shared an image of a blood-spattered Batman logo to his Instagram account in June