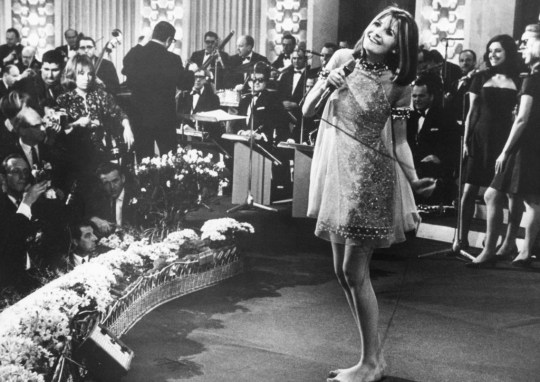 Can Sam Ryder bring back the UK’s glory years?

We can dream… kick off your shoes and bounce to Sandie Shaw’s first UK winner that turned us – for a while – into Eurovision’s team to beat.

Abba are Eurovision. So forget the dodgy comeback and get down to the 1974 Eurowinner everyone knows. How could you ever refuse?

Johnny Logan, the balladeer with the boyband looks, turned Ireland into a Euro-powerhouse. The song to play if it all goes pear-shaped for Sam.

How to turn a fun but probably not winning song into a guaranteed vote-catcher?

Whip some skirts off! Have a Bucks Fizz on Bucks Fizz for their costume contest clincher. Different times.

OK nostalgia time, the last UK winner. Katrina And The Waves, belt out the feelgood anthem originally intended for the Sally Army.

Iceland went for some rather sexual staging back in 1997

This one’s niche, but if you like your party to go with a fetish swing and fishnets, check out Iceland’s Paul Oscar. Great tune, pervy video.

Gimp masks and guitars – with this rock belter from Lordi Finland took Eurovision crashing with a mighty riff into the 21st century.

Best bop: Ukraine’s Verka Serduchka is a Eurovision legend and Lasha Tumbai is an irresistibly bonkers knees up.

Inexplicably it came 2nd – and is that really not Christopher Biggins under that make up?

Cheeky fiddler Alexander Rybak turned Norway from zeroes to heroes with this runaway winner, which came with the added attraction of amazing acrobats.

Many have tried – and failed with – that trick since.

Suddenly Eurovision got cool and was all down (on her knees) to Swedish dance diva Loreen who took us all up, up, up, up up, up.

I think that’s the right number of ups.

A bearded lady singing a should-have-been Bond theme – Conchita Wurst was way ahead of the inclusivity curve with this rousing anthem.

A twitchy chap with a dodgy ticker singing a gently soulful love song – and it turned out to be the biggest landslide winner ever.

Step forward Portugal’s Salvador Sobral with a classic blessed by the voice of an angel.

Dutch winner Duncan Laurence gave Eurovision a big boost in the US where this radio-friendly tune went platinum.

Will Ferrell took note and Fire Saga was born.

Måneskin rock – and they ruled. Eurovision will never be this cool again.

We have no idea why Sam Ryder’s song is all in CAPS but if he nails it in Turin we’ll be screaming it at the night SKY!

The Eurovision Song Contest Grand Final kicks off on Saturday, May 14 at 8pm on BBC One.