The year is 2004. A team made up of some of the most talented stars in their sport spectacularly fail on the big stage, to the frustration and heartbreak of their adoring public.

No, this is not the story of Sven Goran Eriksson’s England at Euro 2004, rather the calamity of the United States Men’s Basketball team at the Athens Olympics.

In truth, the cracks had been showing before Larry Brown’s side’s disastrous campaign in Greece. 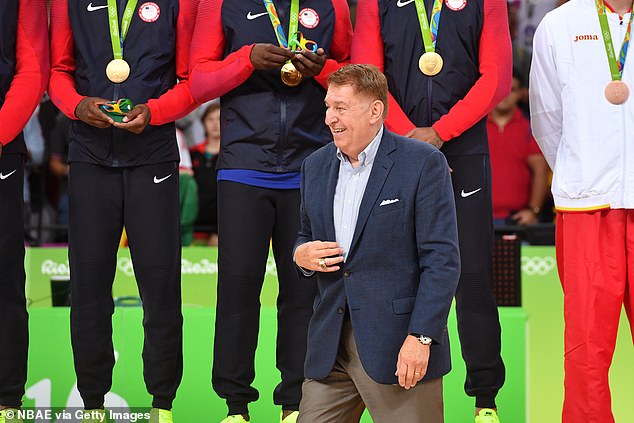 Team USA registered a disappointing seventh place finish at the 2002 World Cup and, remarkably, little was done to address the problems of that campaign heading into Athens.

The US basketball team has a rich history since the ‘Dream Team’ containing the likes of Michael Jordan, Charles Barkley, Karl Malone and Scottie Pippen joined forces in 1992 to steamroll their competition in Barcelona.

NBA players had taken to representing the United States in international competition, but by 2004, the relationship between Team USA and the country’s top stars had become torn, causing a number of players to pull out of the squad.

That was, in part, down to the contempt that some players had for Brown. The former Detroit Pistons coach took a conservative, perhaps throwback approach to coaching. The US team had an average age of 23.5, and did not take to the veteran’s coaching style. 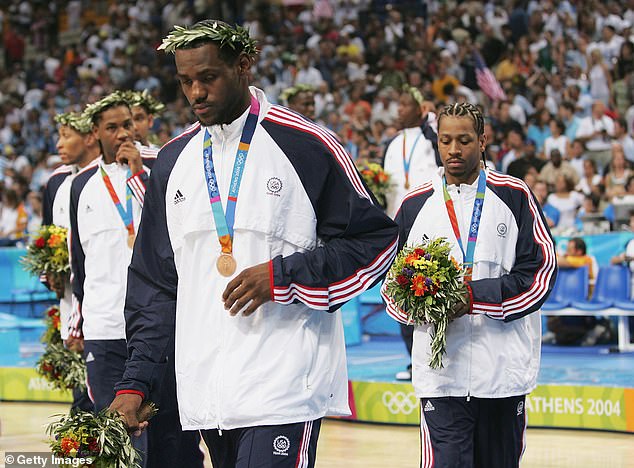 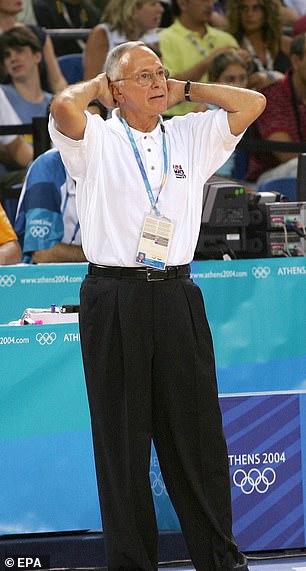 Coach Larry Brown’s methods had seen some players pull out of the squad, leaving the team short on quality

‘Truth be told, that’s probably why nine guys decided that they didn’t want to go do the Olympics,’ Richard Jefferson told NBC Sports after recalling how players reacted with disdain to Brown’s attempts to curb their youthful exuberance.

Moreover, several players refused to travel to Greece owing to security concerns amid fears of a terrorist attack, leaving Brown with a threadbare squad that was, at best, the same quality as a D-League team.

The disconnection between players and coach came to light during a number of below-par performances. Both Puerto Rico and Lithuania beat Team USA before they were eliminated at the semi-final stage against Argentina.

Their third place finish is the only time the men’s basketball team has never won gold at the Olympics.

Stephon Marbury, who was part of the Athens squad, described his Olympics experience as the ‘worst 38 days of my life’.

Allen Iverson said: ‘You can’t just show up at a basketball game and feel that because you have USA across your chest you’re going to win the game.’

The 2004 humiliation called for change, and Team USA chiefs turned to Jerry Colangelo to steady the ship and get the side moving back in the right direction. 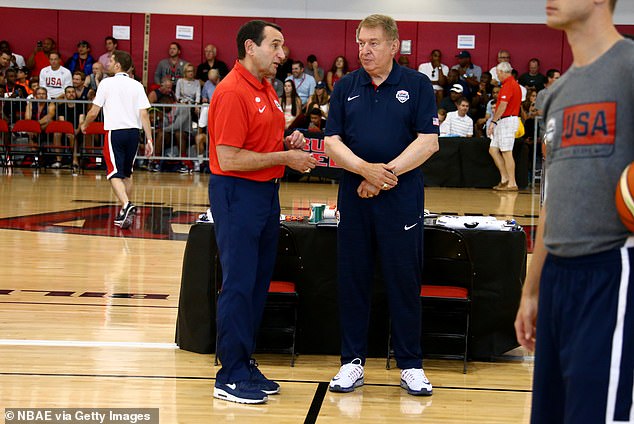 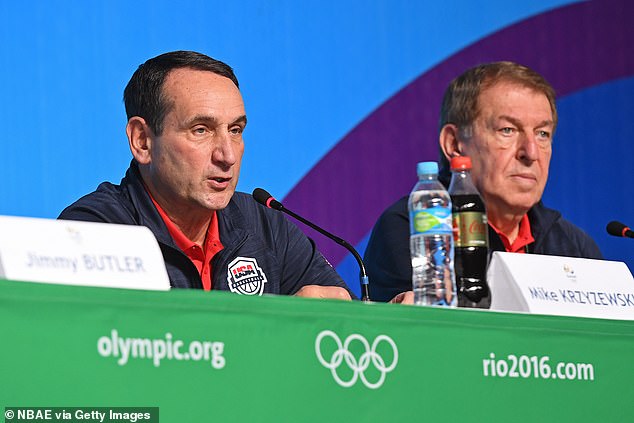 Known as the ‘Godfather of Valley Sports’, business magnate Colangelo was responsible for bringing basketball, baseball and hockey to the desert, and was general manager of the Phoenix Suns NBA franchise from their creation in 1968 until 1995, and was their owner from 1987 until 2004.

Having been named NBA Executive of the Year on four occasions and given his vast experience in basketball, Colangelo was viewed as the right man to get US basketball back on its feet.

The first order of business was to get the NBA’s biggest stars back onside. The US basketball team had been viewed with disdain and Colangelo sought to rescue the reputation of the national side, making it a more desirable team to represent in the process.

‘So far, I’m five-for-five with the guys I’ve spoken to about participating. And some players who were pessimistic in their comments a couple of months ago are now soliciting an invitation.’ 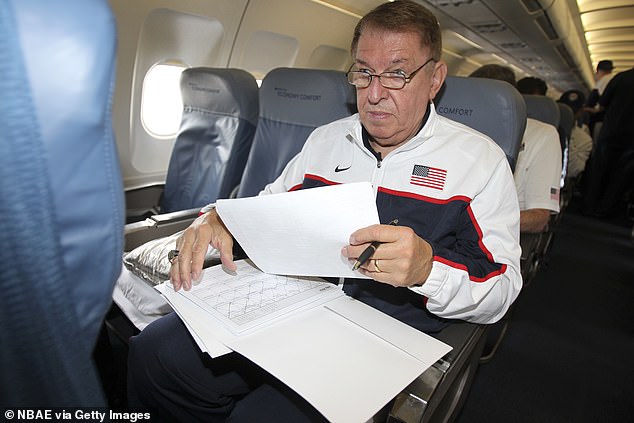 Colangelo moved to get the NBA’s biggest stars, and their sponsors on side following 2004

Colangelo’s efforts to rebuild the relationship between players and country were not limited to phone calls with stars, either, as the business magnate sought to get the big brands back on side.

It is fair to say that Nike, the most influential brand in basketball, were less than impressed with Team USA’s exploits in Athens.

The sportswear giant had watched in horror as LeBron James, then a 19-year-old sensation whom the company had invested millions, was consigned to the bench for the duration of the team’s campaign as Brown put his faith in the veterans.

‘The Nike relationship with the NBA had fallen apart,’ Colangelo said via NBC. ‘But I had a lot of relationships there myself.

‘[Nike founder] Phil Knight was a partner of mine in the baseball team in Arizona. I’ve known Phil Knight for so many years. Coach [George] Raveling [currently Nike’s Director of International Basketball], is a dear friend of mine for many, many years. 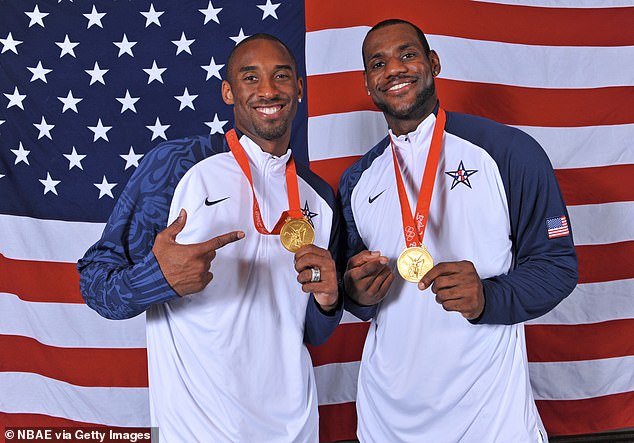 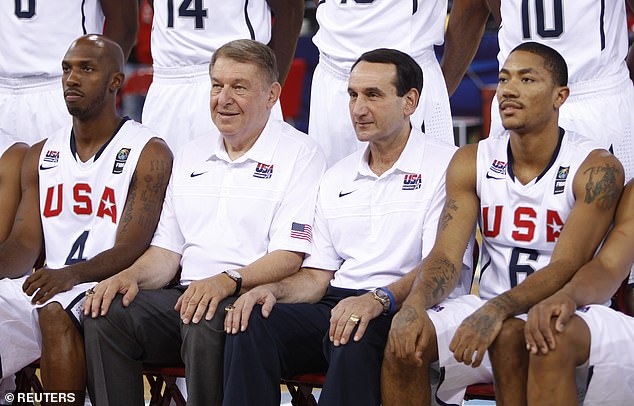 Under Krzyzewski, Team USA recorded an incredible 75 wins and one loss over ten years

‘So the relationships were there. And it was a matter of re-establishing a relationship. But I wanted to make it clear to them, this wasn’t an NBA deal. This was USA Basketball. This is our own entity and brand. And that kind of opened the door.’

Colangelo got Nike on side but also stressed that both he and the coach would have the final say on who gets called up and plays for the side, avoiding the obvious problem of only selecting players who represent Nike.

By the 2006 FIBA World Cup, Colangelo had the likes of LeBron James, Dwight Howard and Chris Paul on board.

But Brown was nowhere to be seen. Colangelo had decided to shake things up on the sidelines and appointed Mike Krzyzewski as head coach of the national team.

The pair set about changing the culture of Team USA, with Iverson’s stinging comments about the attitude of players when representing their country still ringing in the ears of Colangelo following the Athens nightmare. 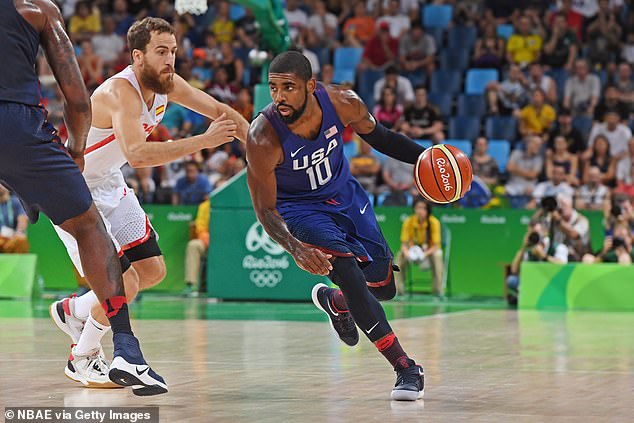 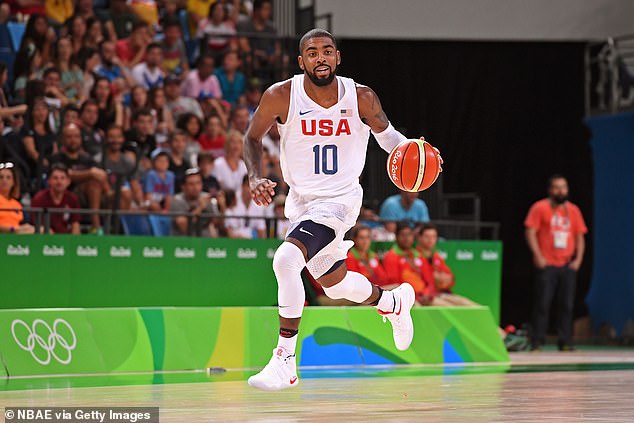 ‘When we break camp, we’re leaving on a mission. No entourages and no families are heading to the Far East,’ Colangelo said ahead of the World Cup in Japan. ‘We’ll bring families in for the medal round if we make it.’

Team USA finished third in Japan but despite that result, the wheels were in motion for this unstoppable juggernaut of international basketball.

Led by Dwyane Wade, Team USA were labelled the ‘Redeem Team’ as they arrived in Beijing, China, for the 2008 Olympics on a mission to right the wrongs of four years earlier.

And they did just that, beating Argentina in the semi final to avenge that Athens horror show before defeating Spain to return to the summit of the international game. 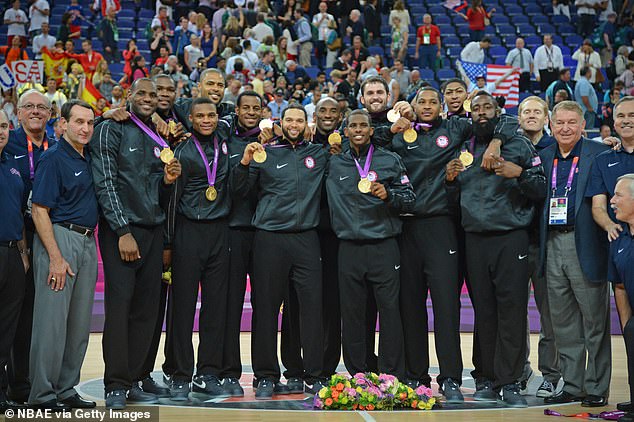 Colangelo will retire as managing director after the Tokyo Games, with a record of 79-4

From there, Team USA, Krzyzewski and Colangelo were an unstoppable force, winning gold in London and Rio as the coach racked up an incredible record of 75 wins and one loss over his tenure in charge of the team.

More pertinently, Team USA’s success on the international stage had made them a desirable team to be a part of again.

‘It was a prestige honour before, but once (Colangelo and Krzyzewski) came in and built up a culture, it totally changed into a different dynamic,’ Kyrie Irving told NBC.

‘Every generation that is coming up has to come through USA Basketball if you’re, quote/unquote, a top player in the country.’ 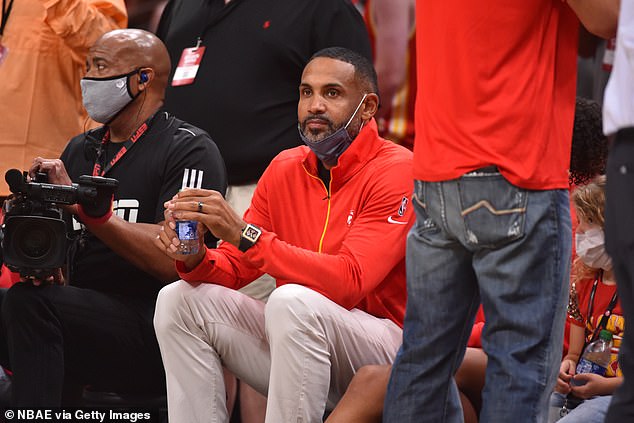 Grant Hill, who won gold with the team in 1996, has the difficult task of taking over the role 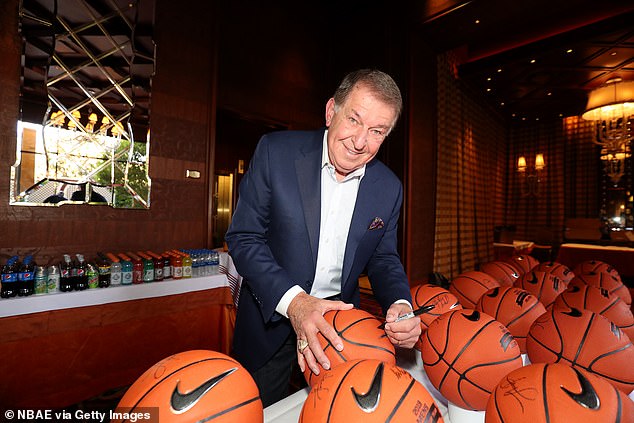 Krzyzewski left his role as coach after Rio and long-time assistant Gregg Popovich has taken over. At 81, and after 16 years of leadership, Colangelo has decided to step away from Team USA following Tokyo 2020.

Grant Hill, who won gold with the basketball team in Atlanta 1996, will have the unenviable task of following in the footsteps of Colangelo.

‘I intend to spend an incredible amount of time with Jerry, shadow him some this summer, and I think that experience will certainly help as we move forward,’ Hill said. ‘He’s just an invaluable resource and has done a remarkable job, so you can’t help but learn from someone like Jerry.’

‘I want to emphasize how much everyone associated with USA Basketball appreciates Jerry Colangelo for everything he did for USA Basketball over the past 15 years,’ USA Basketball Board of Directors chair Martin Dempsey said.