Richarlison made history by becoming the first Premier League player to score a hat-trick at the Olympic Games as Brazil had to hold on to fend off a late comeback from 10-man Germany.

Andre Jardine’s men got off to a brilliant start when Ajax winger Antony sent Richarlison through on goal, with the Everton star needing to cracks at goal to beat Florian Muller in net after just even minutes of play.

It took just 15 more minutes for Richarlison to get his second of the game, as he got his head onto the end of Arana’s cross to leave the German defence flat-footed. 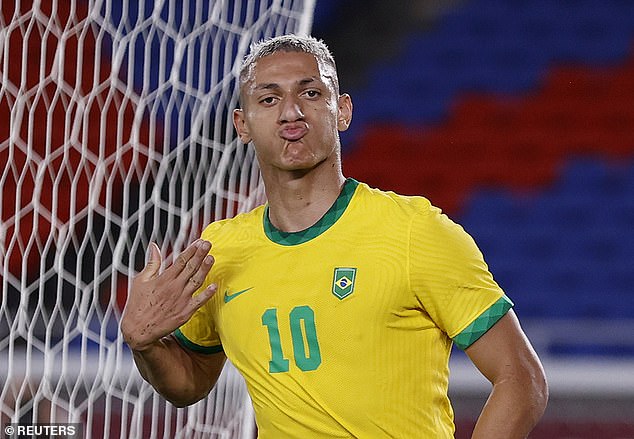 Then, on the half-hour mark, Richarlison made history by becoming the first ever Premier League player to score a hat-trick at the Games, after he collected Matheus Cunha’s pass and curling his effort into the far corner of Muller’s net.

Brazil were on a complete rampage and it could’ve been 4-0 just before the break but Muller managed to save Cunha’s spot-kick in first-half stoppage time.

Germany managed to, rather fortunately, pull a goal back through Nadiem Amiri, who forced Santos into a goalkeeping howler, with the Brazil keeper unable to keep the rather tame volleyed effort out. 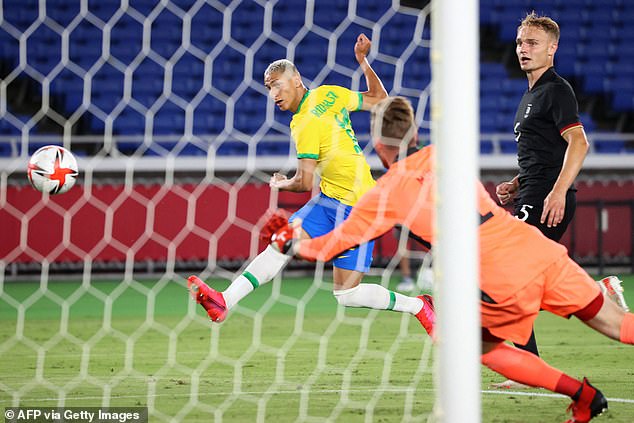 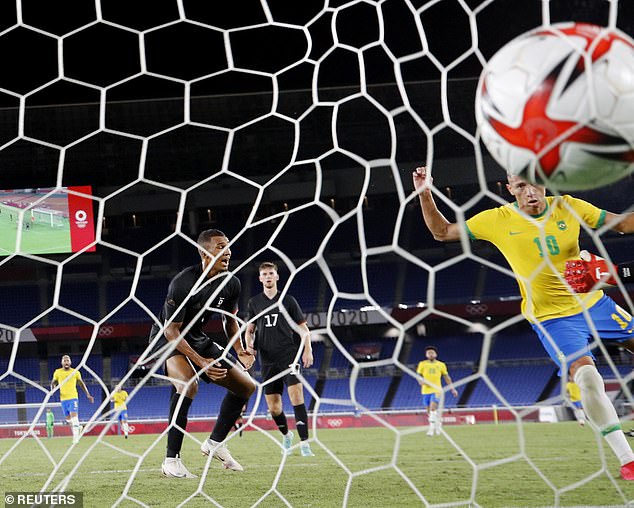 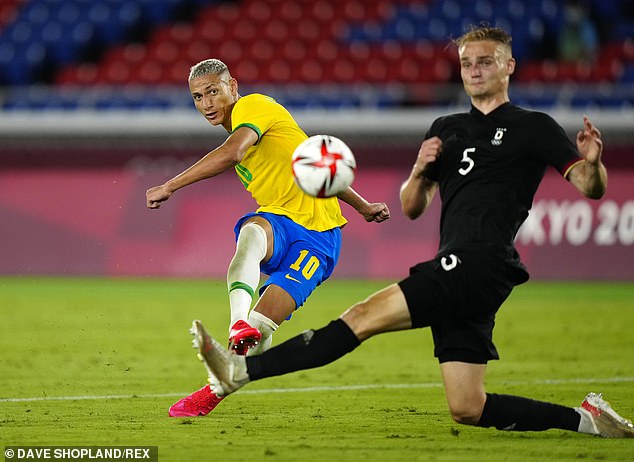 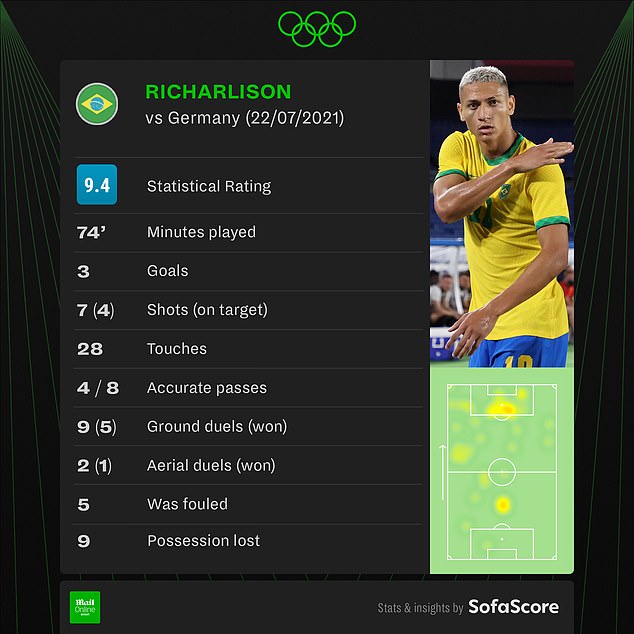 The Brazil striker was on top form in the win when looking at his stats from the match, as provided by SofaScore

But after being granted a lifeline, the Germans were reduced to 10 men after Max Arnold was harshly sent off for a second bookable offence, leaving Stefan Kuntz’s men with a mountain to climb.

Brazil continued to threaten and should have increased their lead on a number of occasions through the second 45 minutes, but Muller was able to keep the score down late on in the match.

However, with the odds stacked against them and with minutes left on the clock, Germany pulled another goal back through substitute Ragnar Ache, who decreased the deficit to just one on the 83rd minute to make it game on.

However, while Brazil spurned plenty of chances to put the game out of reach, Paulinho did finally restore a two-goal deficit in stoppage time to make it 4-2. 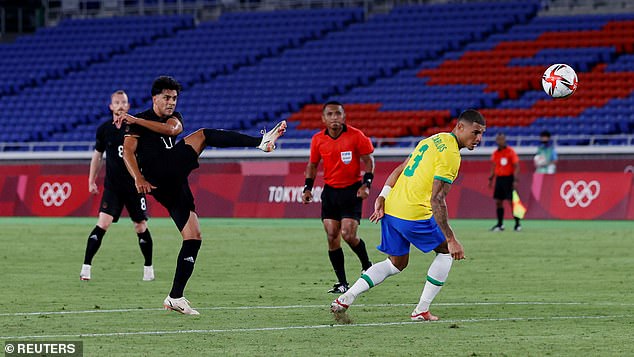 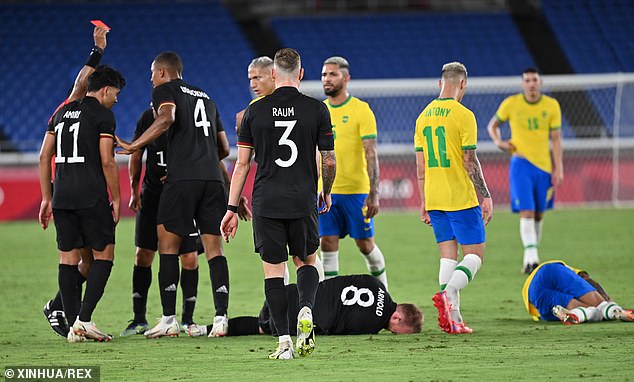 However, Germany were then reduced to 10 men after Max Arnold was shown a second yellow 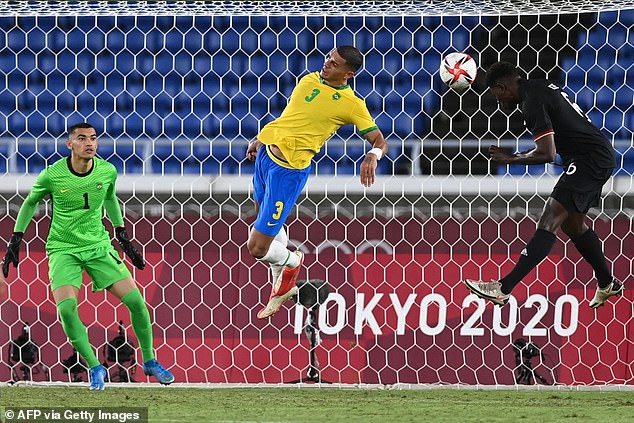 However, despite being a man down, Ragnar Ache made it 3-2 with a thumping header late on 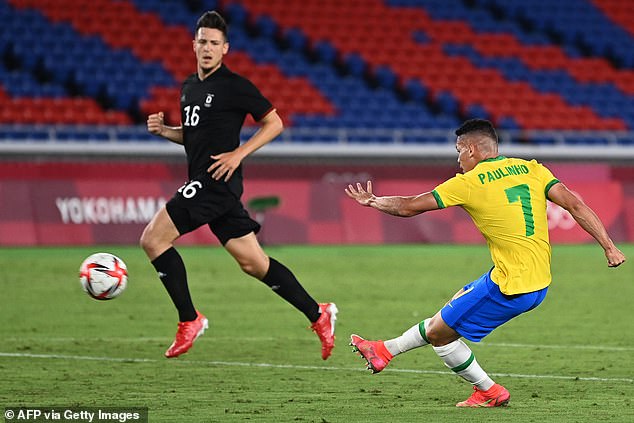 But the Germans were exposed far too often, with Paulinho scoring a fourth in stoppage time

MAN OF THE MATCH: Richarlison (Brazil)