And on Friday, Tom Cruise, 59, filmed a daring upside down train stunt in Derbyshire for Mission Impossible 7, after parachuting in from a helicopter.

The Hollywood movie production had a Norwegian train carriage crash off the edge of a cliff and become suspended upside down above large trees. 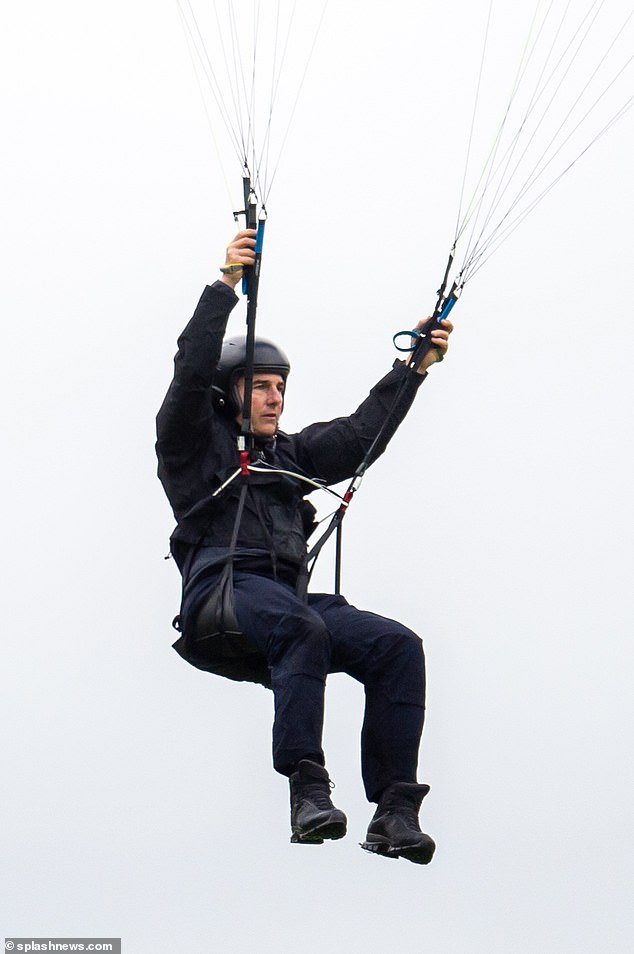 Action man: On Friday, Tom Cruise, 59, filmed a daring upside down train stunt in Derbyshire for Mission Impossible 7, after parachuting in from a helicopter

Tom flew in via helicopter to watch over the proceedings before parachuting down to the ground in true action man style.

Clad in indigo coloured jeans and a navy jumper, the A-lister was spotted clambering over boulders near to the train wreck.

This is just the latest in an array of stunts that Tom has performed for the latest film, with the actor previously seen doing a parachute jump four times to ensure director Christopher McQuarrie landed the perfect shot in the Lake District.

And prior to that, Tom was photographed clinging to a train for another daring scene filmed in Yorkshire. 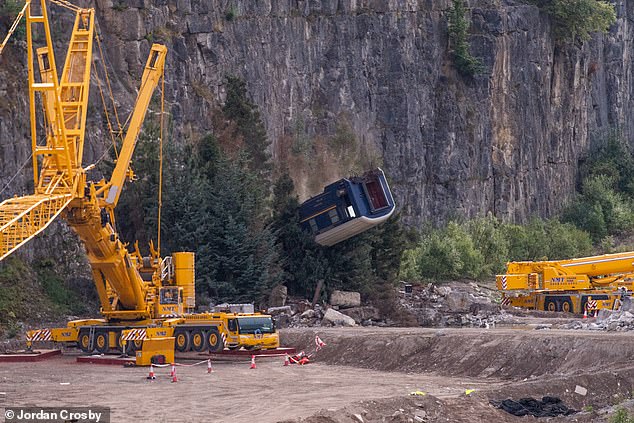 Wow! The Hollywood movie production had a Norwegian train carriage crash off the edge of a cliff and become suspended upside down above large trees 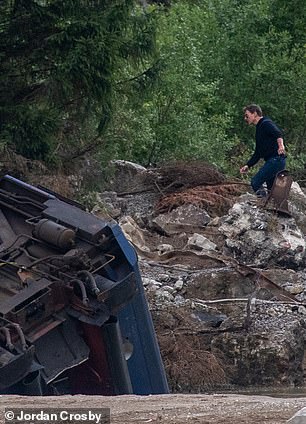 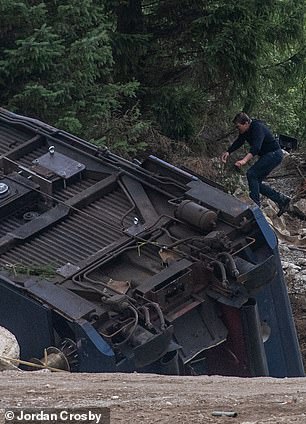 Getting involved: Clad in indigo coloured jeans and a navy jumper, the A-lister was spotted clambering over boulders near to the train wreck 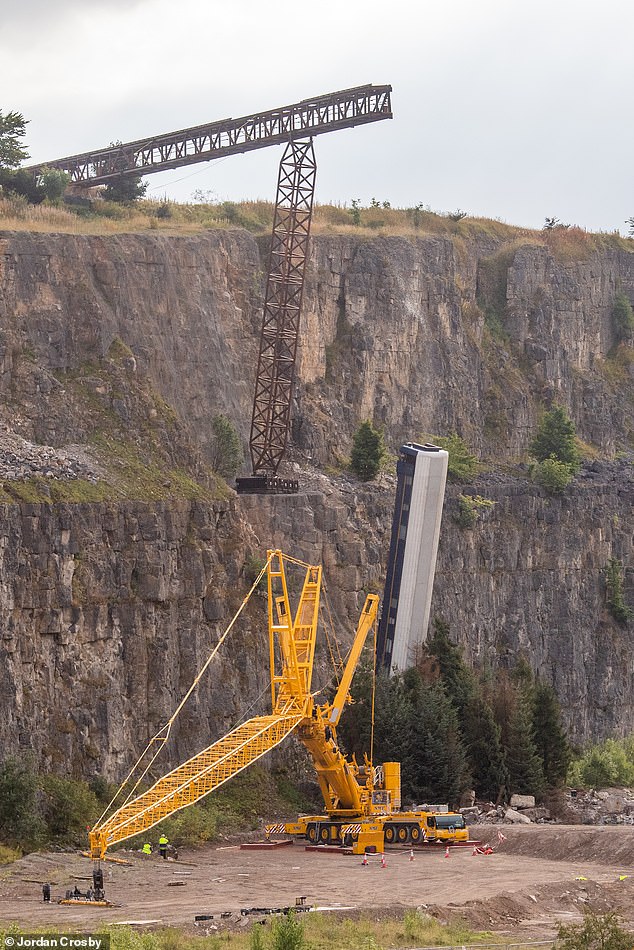 Incredible: The sheer scale of the stunt was quite remarkable 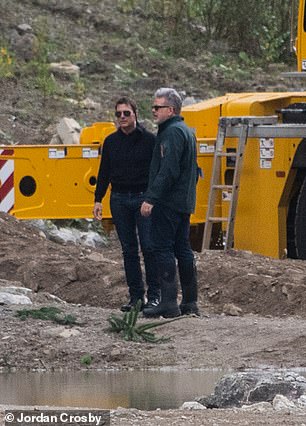 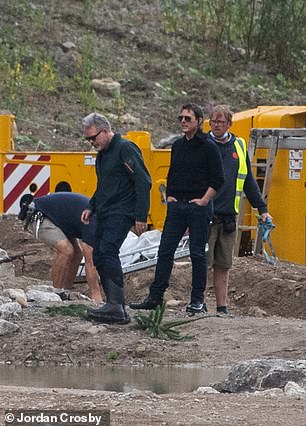 Overseeing: Tom chatted to crew members on site while overseeing the stunt 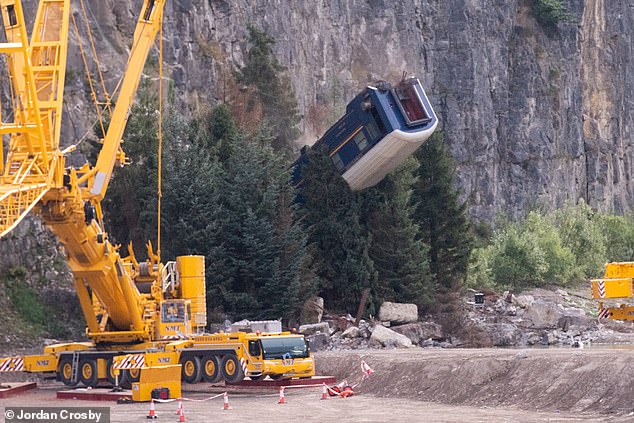 There it goes! The train flipped over and landed on trees below

It comes after Mission: Impossible 7 filming was reportedly paused again in June due to a positive Covid test with crew members speculating it could be Tom.

Despite there being ‘no proof’ to back up the idle talk, it has been claimed that people are gossiping it could be Tom due to his alleged absence on set.

The actor was previously said to have been forced to self-isolate for two weeks after 14 people on the UK set of the film tested positive for coronavirus. 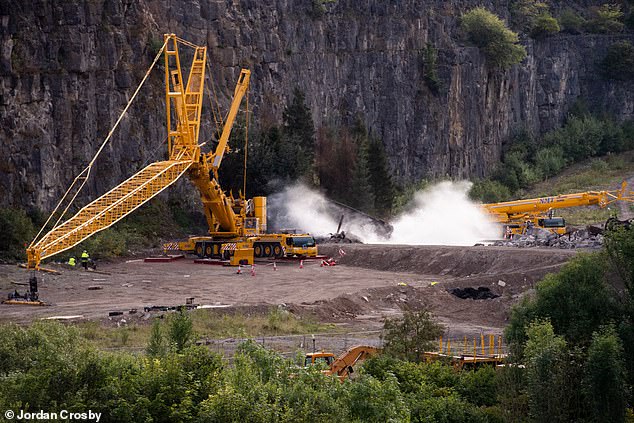 Collapse! Eventually, the train hit the ground, sending smoke up into the air on impact 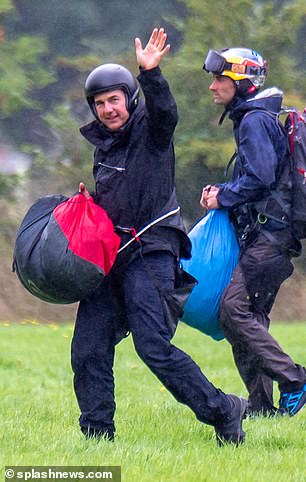 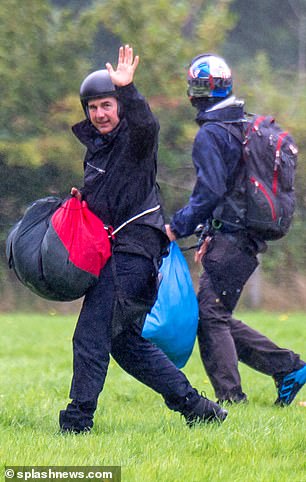 Ready! The star waved over as he made his way to the helicopter in fully safety gear 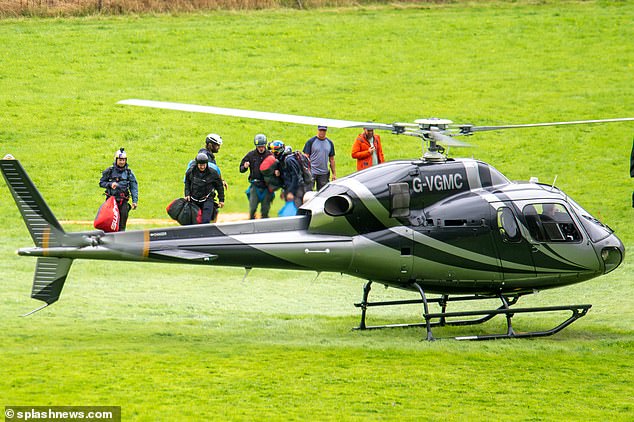 To the chopper! Tom flew in via helicopter to watch over the proceedings 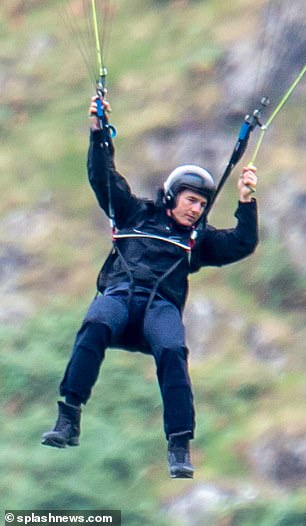 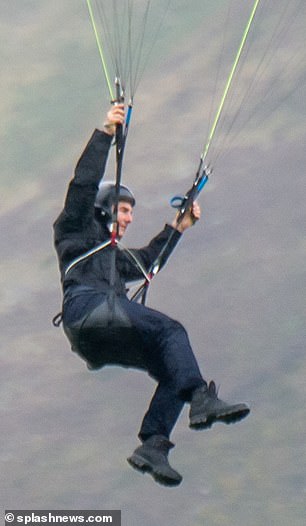 On the look out: Tom took in the phenomenal view as he descended via parachute 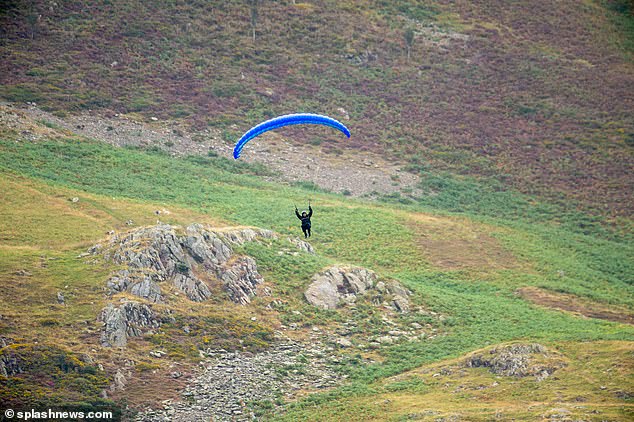 The actor was said to have spent a day filming with four female dancers as they shot scenes in a nightclub for the upcoming movie, who later tested positive.

Filming of the new instalment previously took place at Longcross Studios in Chertsey, Surrey, and production was halted and the 60-member team self-isolated amid the positive tests.

Mission: Impossible 7 filming has been hit with several set backs and delays amid the Covid pandemic, with it shooting on location in Italy, the UK and Norway.

In December it was reported that five crew members had quit after Tom launched into two rants. 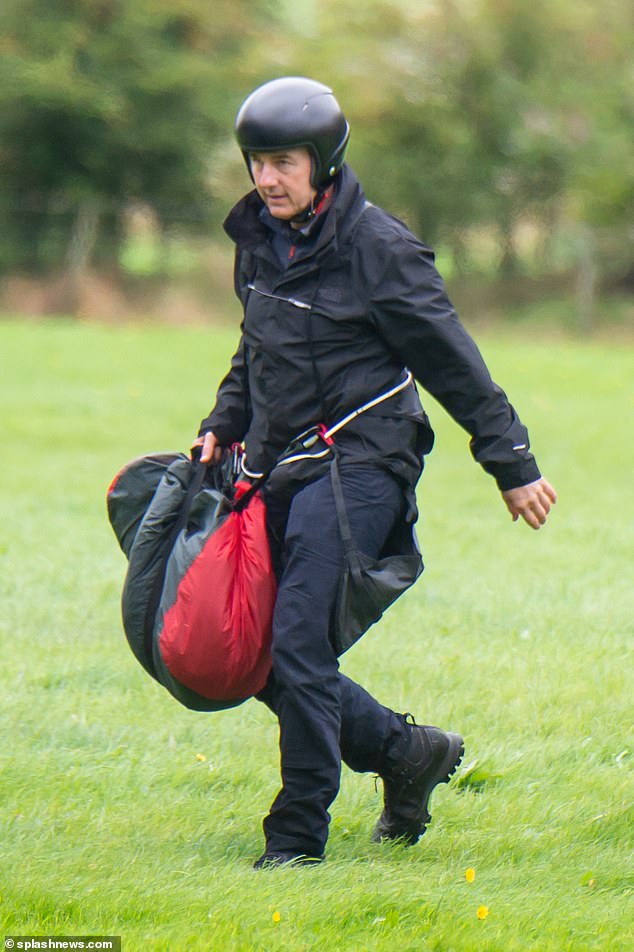 Geared up for the go: Tom carried his parachute in his hand ahead of the helicopter flight 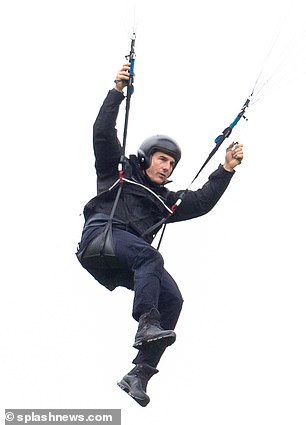 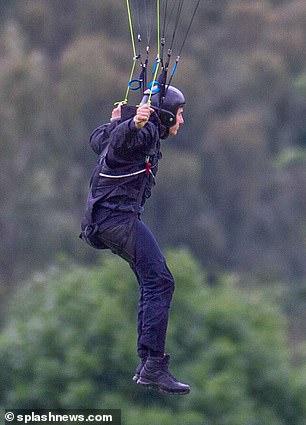 Fully focused: Tom held onto the apparatus and guided himself to the ground 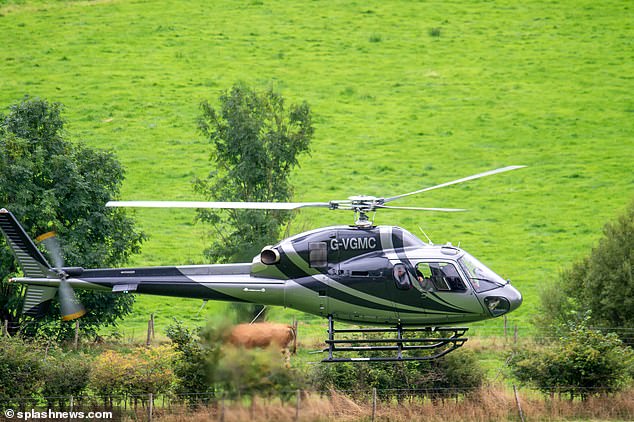 Takeoff: Tom was joined in the helicopter by other crew members 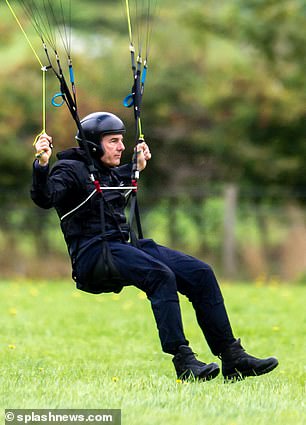 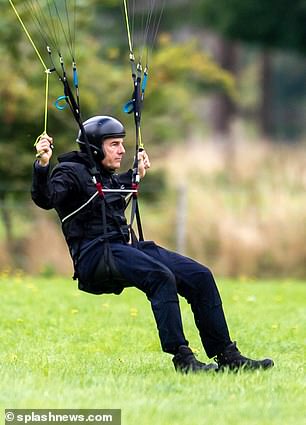 Touchdown: Tom expertly guided himself to the ground after jumping from the helicopter 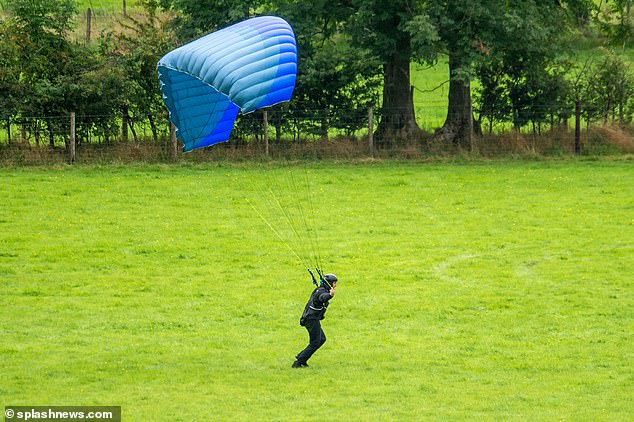 Easy does it: The movie star steadied himself as he touched down on the grass

The actor was said to have given staff a dressing down after he caught them breaking UK Covid rules at Warner Bros. Studios in Leavesden, Hertfordshire.

A source claimed after news of the first outburst was made public, there was ‘more anger’ at the already ‘tense’ production.

An insider said: ‘Tension has been building for months and this was the final straw. Since it became public there has been more anger and several staff have walked.

‘But Tom just can’t take any more after all the lengths they have gone to just to keep filming at all. He’s upset others aren’t taking it as seriously as him.’ 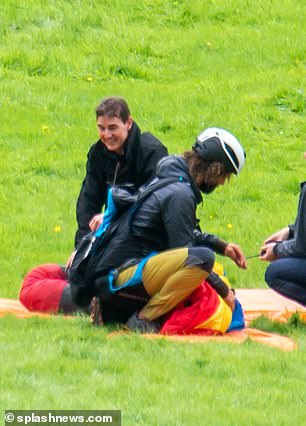 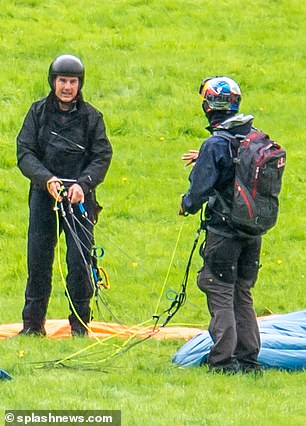 Loving it! Tom clearly couldn’t wait to get up in the helicopter as he prepared for the jump 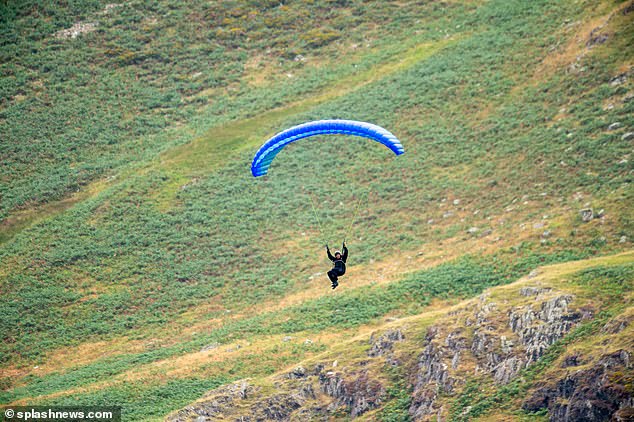 Incredible: The action man appeared unfazed by the dramatic descent 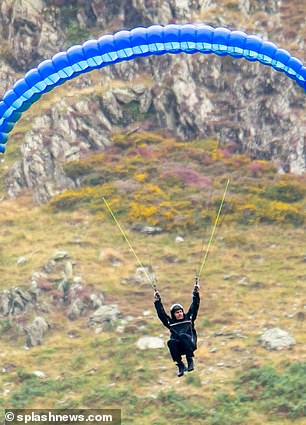 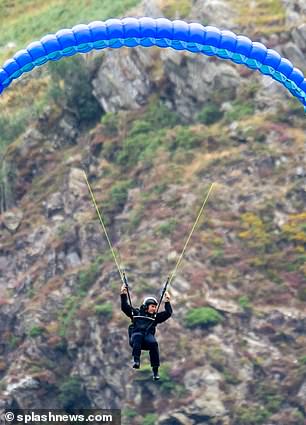 What a trill! As part of him job, Tom gets to experience thrill-seeking adventures daily

They added that it was Tom who feels responsible for the production after putting so much time and money into ensuring precautions are in place so the team can film.

It was previously reported that the Hollywood star scolded workers who flouted social distancing rules while filming at Warner Bros. Studios.

MailOnline contacted Tom’s representatives for further comment at the time.

Mission Impossible 7 is currently set for release on September 30, 2022. 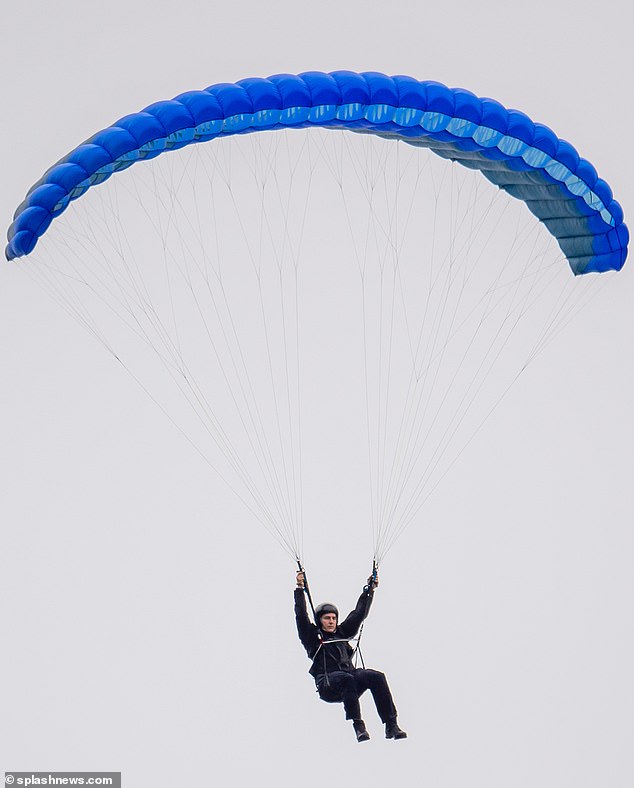 Another day, another stunt: The parachute jump is just the latest in the stunts he has performed for Mission Impossible 7