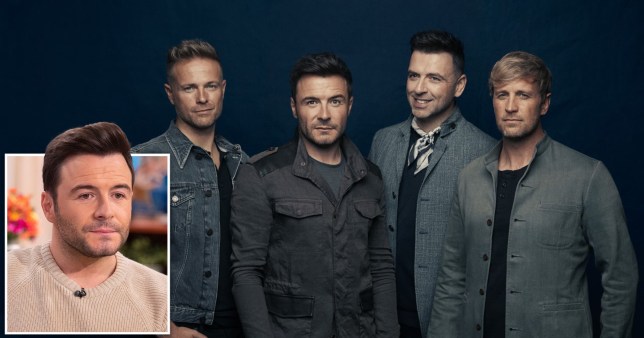 Westlife singer Shane Filan has admitted he’s ‘still finding it tough’ after suffering the death of both his parents within a year.

The Irish man band have today announced the exciting news that their next album, Wild Dreams, will be out on November 26 accompanied by the lead single Starlight.

Shane, along with bandmates Mark Feehily, Kian Egan and Nicky Byrne, sat down to write the record separately from their homes.

However, it was a particularly challenging time for Shane whose mother and father died within nine months of each other. Some of the songs on Wild Dreams were written about his loss.

Speaking to Metro.co.uk about his parents’ deaths, Shane explained: ‘Personally for me it was a difficult time as I’d lost both my parents and in that whole time it was a very sad time for me. I found [writing the album] got me through a lot of that.

‘It was very difficult… My mum was sick for four years with cancer unfortunately [but she] got to see Westlife come back, she got to see us perform the big shows in London and in Croke Park in Dublin, which were the most spectacular shows.

‘At the end of the tour we did two shows at Croke Park with 85,000 people a night and my mum and dad got to see that and I’m so glad.’

However, Shane experienced a terrible comedown from the high of the tour when his father was diagnosed with pancreatic cancer two days after the last Croke Park show.

‘Speaking of highs and lows… my mum was already sick so it was just like, “Oh my God”. Literally the biggest high of being back with the boys and then one of the worst things that can happen in your life has happened,’ he recalled.

‘It was tough. My dad was sick throughout a bit of the pandemic and he unfortunately had cancer as well. I still find it tough and losing both of them together was even more difficult but one thing I took from it was… I started to learn guitar and lots of these songs were inspired by trying to be happier.’

Shane believes his parents would be proud that he aspired to write happier songs; but the album finishes with the song, Always With Me, which is based on how his dad must have felt for those ‘nine months when he was without her’.

‘It’s a beautiful story and I’m so proud of it. It took me four months to finish it because we kept going over it trying to make it better,’ the singer revealed.

Wild Dreams features brand new songs but also  live recordings of some of Westlife’s biggest hits, including Flying Without Wings and Uptown Girl.

The four-piece group reunited in 2019 after a seven-year hiatus and topped the charts with their comeback album, Spectrum.

Shane said of their number one: ‘That success maybe gave us the confidence for this album to start again and give them more music.

‘It definitely made us realise our fanbase are still there and maybe even more, we sold more tickets at the last gig than we ever did on tour. Our album was number one, it was a big confidence boost for us after seven years of being away.

‘Bands come and go and you do wonder if you’re relevant anymore. Having Ed Sheeran involved on the first album back… it made us realise well if he’s a fan and he likes our music, then there’s no reason why we can’t be encouraged and sit in the charts beside him and he was the most successful current artist in the world at the time, so even that gave us a boost.’

Shape Of You hitmaker Sheeran penned their comeback single, Hello My Love, along with Steve Mac.

Giving credit to the pop icon, Shane added: ‘It brought us back to life again musically and we found our sound again.

‘We’ve got lots to thank Ed Sheeran for that reason. It’s opened up lots of doors now on this album.’

‘It’s going to be so exhilarating to be back on-stage again and just to be with the fans and I’m sure they’re excited too,’ he added.

Westlife’s new album, Wild Dreams, is out on November 26.