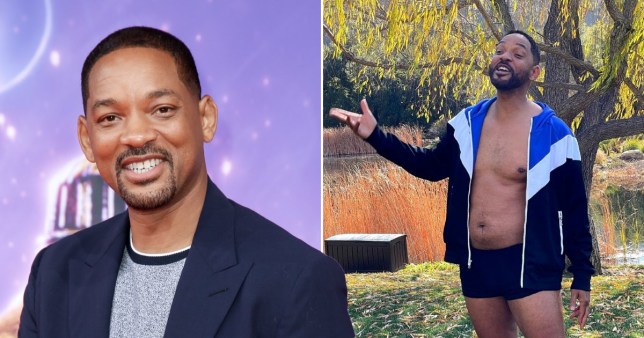 Will Smith has decided to ‘get in the best shape of his life’ after revealing the effect lockdown has had on his body.

The Fresh Prince of Bel Air star said he ‘loves’ his body how it is but thinks he could ‘feel better’ within himself.

He has decided to team up with YouTube for his health kick, declared he is going to cut out the ‘midnight muffins’ – which doesn’t sound like fun at all.

YouTube’s fitness series, called Best Shape of My Life, is set to air in 2022 and has been described as ‘the fun, funny, inspirational, wildly adventurous, and deeply entertaining story of Smith challenging himself to improve every aspect of his fitness, from agility to power to recovery and more, teaming up with guests including pro athletes, scientists and experts, and top YouTube creators.’

Will posted the rousing message on Instagram: ‘This is the body that carried me through an entire pandemic and countless days grazing thru the pantry.

‘I love this body, but I wanna FEEL better. No more midnight muffins…this is it!

‘Imma get in the BEST SHAPE OF MY LIFE!!!!! Teaming up with @YouTube to get my health & wellness back on track. Hope it works.’

He added a picture of himself standing proudly in a studio with his hands on his hips, wearing only a pair of black underwear and a determined look on his face. Big Willy means business.

Fans shared their support for Will’s new project, with Star Wars actor John Boyega writing: ‘My guy said “hope it works” if you don’t get your I am legend on! About to be ripped in 3 days!’

‘YOU GOT THIS!’ said one fan while another said ‘Stoked for the transformation!’

Predicting Will is going to be shredded pretty soon, one fan posted: ‘You’re Will Smith. I’m sure you’ll be on the cover of men’s fitness by year’s end with your transformation.’

‘I have no doubt you about to look like “I am legend” will all over again’ read another comment.

The Hitch star has no problem getting himself ripped for blockbuster roles, having undergone an intense workout regime for 2016 superhero flick Suicide Squad.

But he may have gone a little too hard as he ended up tearing a leg muscle early on in filming.

‘I knew from the very beginning that this was going to be a big movie for me,’ he told Men’s Journal. ‘When you’re 47 years old, no injury is a mild injury anymore.

‘I was stepping back to throw a blow, and my calf popped. Everyone heard it. The doctor there told me that I was going to be down for six weeks, but I couldn’t allow that.’

MORE : What is the Fortnite currency court battle between Apple and Epic Games really about?