South Korea’s short track speed skaters head to the Beijing Olympics next month hoping to leave behind high-profile scandals and bring glory to a country deeply passionate about the breakneck sport.

South Korea are a short track superpower, winning more Olympic medals than any other nation – 48, including 24 golds – since the sport was added to the programme in 1992.

But cases of sexual assault and bullying, and even accusations of sabotaging races, have dogged its skaters and coaches since the 2018 Games in Pyeongchang.

The fallout has lingered right up to February’s Games, with one star skater’s Olympic hopes dashed just weeks from the start.

Shim was punished in December after local media revealed expletive-laden texts she sent to a coach about her team-mates during the 2018 Games.

Shim is one of South Korea’s most successful skaters with four Olympic short track medals, including relay golds in 2014 and 2018.

Even if she had won her case in time for Beijing, there was no guarantee of her being welcome in the team.

In her denigrating messages, Shim had suggested tripping her team-mate Choi Min-jeong if they competed in the same event at Pyeongchang.

The two ended up racing in the 1,000-metre final, got tangled in the final stretch and crashed into the wall. 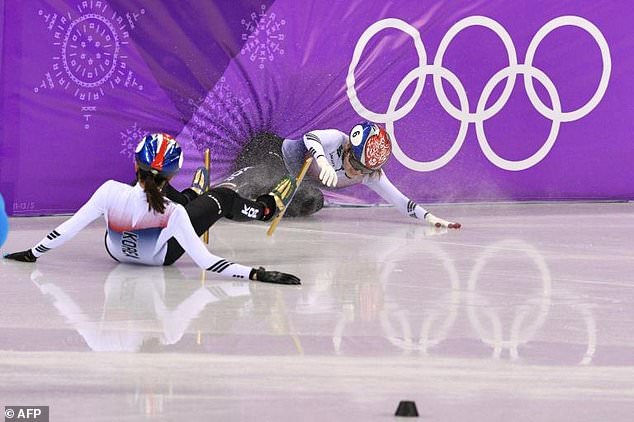 Shim Suk-hee (left) and Choi Min-jeong crashed during the women’s 1,000m short track final in the 2018 Winter Olympics – and the fallout has rumbled on and dogged South Korean skating 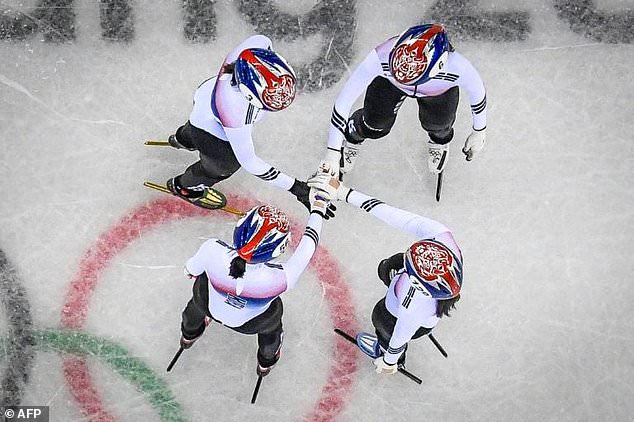 South Korea is an undisputed short track speed skating superpower, with more Olympic medals than any other nation, but behind the glory lies a series of troubles 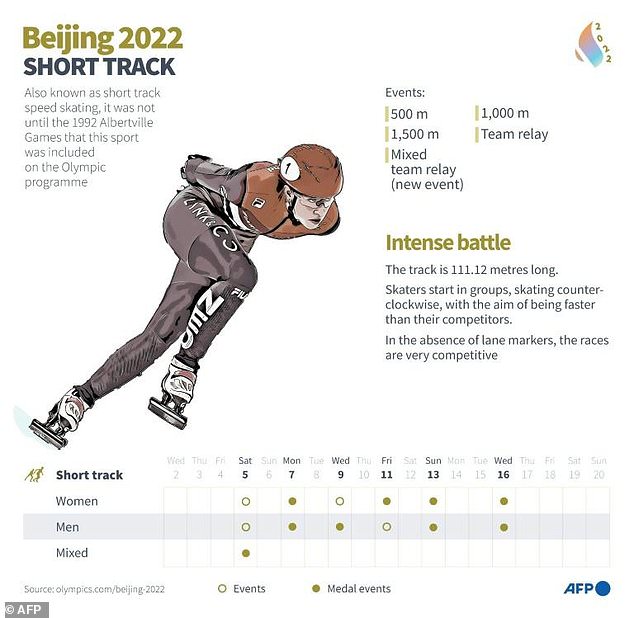 Winter Olympics 2022: a guide to short track speed skating, and when to watch it

Investigators concluded Shim had not intentionally sabotaged Choi, citing a lack of evidence.

Choi has publicly asked Shim to stop trying to contact her to apologise, according to local media.

Despite the controversies, skater Lee Yu-bin was upbeat.

‘I heard that some are expecting the atmosphere in our team to be negative,’ she said at a press conference this month.

‘But… our team’s mood is really good.’

While South Korea’s highly competitive and well-funded Olympic setup has yielded major successes, it has also seen abuse and harassment in several sports, including short track. 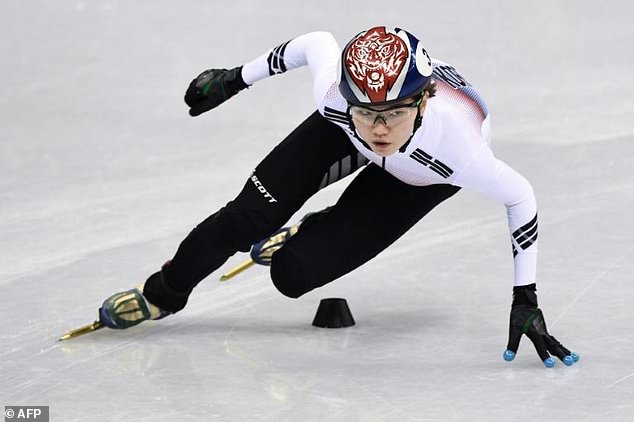 South Korea’s Shim Suk-hee, seen here in 2018, revealed that one of her coaches sexually abused her for years

Shim is among the survivors.

She revealed in 2019 that one of her coaches, Cho Jae-beom, had sexually abused her for three years, starting when she was 17.

He was jailed last year for more than a decade.

Shim’s revelations confronted a culture of shame in socially conservative South Korea, prompting a series of athletes to come forward with similar allegations, and apologies from sports authorities.

Also in 2019, a male skater was suspended for a month after secretly getting into the female dorm at the national training centre.

The next year, the 1,500m Olympic champion Lim Hyo-jun was convicted of sexual harassment after he pulled down another male athlete’s trousers in front of other teammates at the training centre.

But the verdict was overturned on appeal, with the Supreme Court finding last year that ‘the incident happened in a playful circumstance where athletes were fooling around before practice’, Yonhap reported.

The behaviour of some South Korean fans has underlined just how passionate the country is about speed skating. 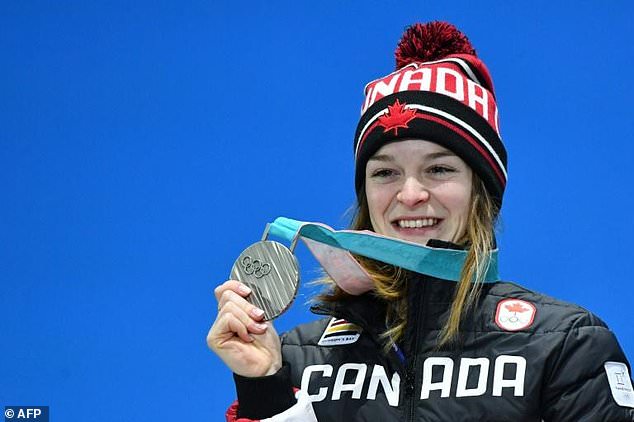 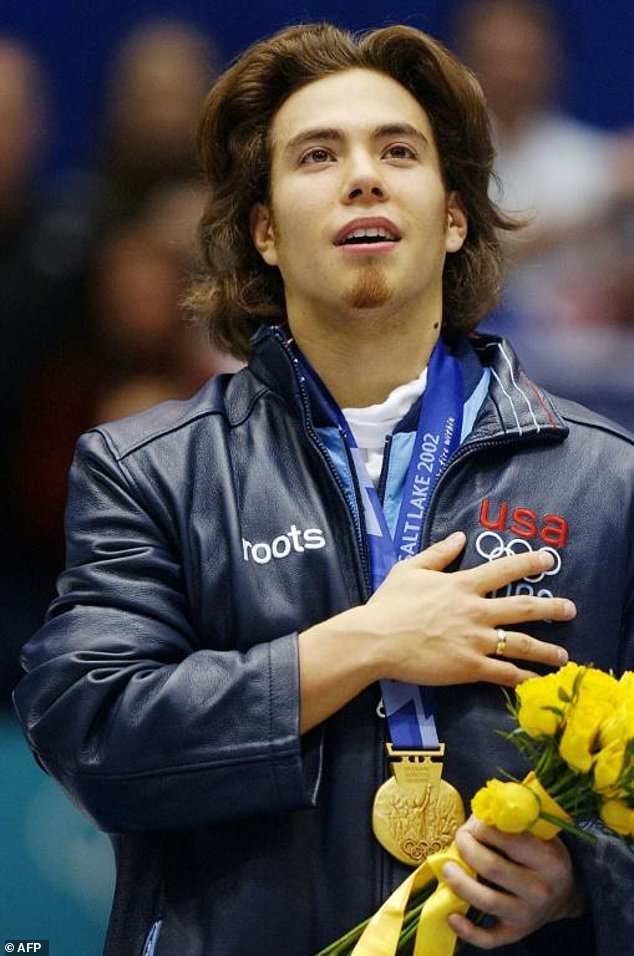 During the Pyeongchang Olympics, Canadian skater Kim Boutin was bombarded with online abuse from South Koreans angry about the disqualification of Choi.

And during Vancouver 2010, a South Korean fan furious over a disqualification decision by Australian judge James Hewish was arrested for threatening to blow up the Australian embassy in Seoul.

Hewish was also involved in arguably the most famous of all South Korean short track controversies.

During the 2002 Olympics, American skater Apolo Anton Ohno won the 1,500m final when Kim Dong-sung – who crossed the line first – was disqualified.

The South Koreans claimed Ohno, who raised his arms in protest as he tried to cut past Kim, fooled the referee.

Ohno became ‘the most hated athlete in South Korea’, according to a newspaper at the time, and one company reportedly produced toilet paper with his face on it.

The entire US team pulled out of a 2003 World Cup event in South Korea over death threats to Ohno. 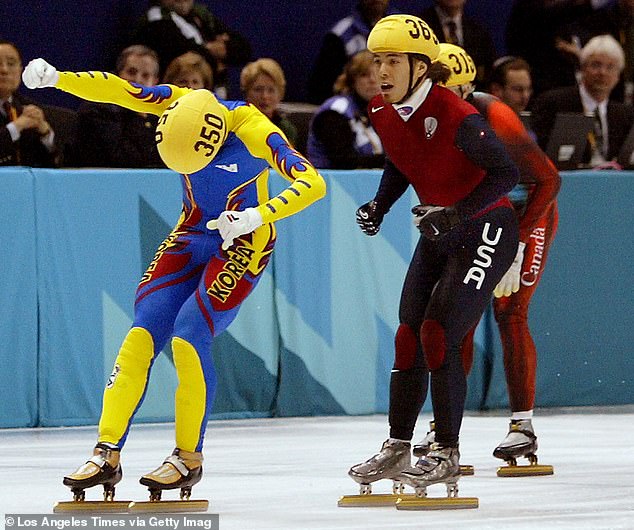 Kim Dong-sung celebrated what he thought was a victory over Ohno, but was disqualified for impeding Ohno’s lane in the Men’s Short Track final at the Salt Lake Ice Center 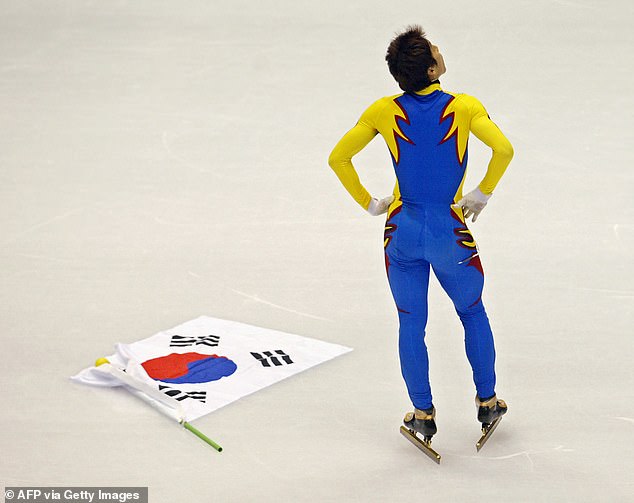 Some years later, the relationship was repaired and the American spoke of his admiration for the country’s dedication to the sport.

Despite their troubled preparations, South Korean short track skaters are again aiming for glory on the biggest stage of all.

‘I know people are worried about how our short track team has been underperforming lately,’ Choi told reporters.

‘But we want to prove that Korea is synonymous with short track speed skating.’